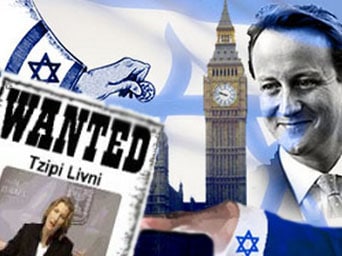 The Guardian reported today that Britain is prepared to back a key vote recognising Palestinian statehood at the UN but only if Mahmoud Abbas pledges not to pursue Israel for war crimes and to resume peace talks.

“On Monday night, the government signalled it would change track and vote yes if the Palestinians modified their application. Whitehall officials said the Palestinians were now being asked to refrain from applying for membership of the International Criminal Court or the International Court of Justice, which could both be used to pursue war crimes charges or other legal claims against Israel.”

I wonder why the British government is so keen to save Israeli war criminals? Could it be because 80% of the Conservative MPs are Conservative Friends of Israel (CFI)? I’d also like to know what is it that led the British Government to change its position on the Palestinian bid for statehood. Is it because our Tory politicians are trying to squeeze more money from their paymasters? After all, if Whitehall’s decision is driven by any ethical and humanist concerns, why then are they trying to save Israeli mass-murderers from being schlepped to the International Court of Justice where they belong.

Another possible explanation for the British turnaround is that Israel and its lobby is actually interested in world support of the Palestinian bid for a State. Such a bid, would accomplish the Zionist project by removing once and for all the demographic threat to the Jews-only state posed by millions of Palestinians in the West Bank and Gaza. A ‘sovereign Palestine’ would ‘liberate’ Israel from the burdens of being an occupier.

I suppose that, following the last Israeli defeat in Gaza, some brain in Whitehall must have cottoned on to the fact that the Jewish State belongs to the past – and doesn’t have much of a future. They’ve probably realised that Britain had better seek some new allies in the Arab world. Still, putting all their money on Abbas might just one more poorly calculated British political decision.