Home Veterans History: The Black Legion, Where Vets and the Klan Met 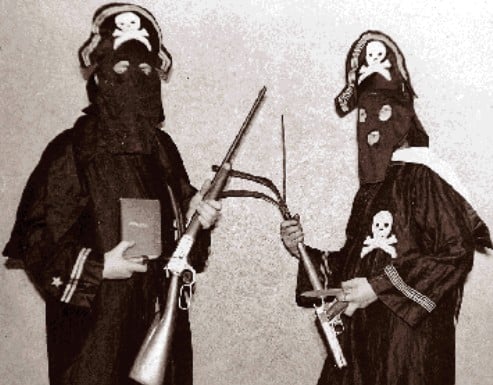 The murder that brought down the Black Legion

The gang that killed Poole was part of the Black  Legion, and the triggerman was Dayton Dean, an employee of the Detroit Public  Lighting Department and, by all accounts, a man who simply lived for violence.  As such, Dean fit the profile of the Black Legion, whose propensity for  violence, as one contemporary observed, made the Ku Klux Klan look like a cream  puff.

The Black Legion was founded in the mid-1920s as the  Black Guards, a security force for the officers of the Ohio Ku Klux Klan. A  Michigan regiment was established in 1931, with Arthur Lupp of Highland Park as  its major general. Organized along military lines, the Michigan Legion had five  brigades, 16 regiments, 64 batallions, and 256 companies. Although its members  boasted that there were one million legionaires in Michigan, it probably  had  only between 20,000 and 30,000 members in the state in the 1930s, one third of  whom lived in Detroit.

The legion had various fronts to cover its activities,  such as the Wayne County Rifle and Pistol Club, whose members frequented a  downtown Detroit sporting goods store with a backroom firing range. It also had  a political front as well, the Wolverine Republican Club. The legion’s political  objectives were broad and, at the same time, narrowly specific. As one of its  promotional pieces stated, “we will fight political Romanism [the Catholic  Church], Judaism, Communism, and all ‘isms’ which our forefathers came to this  country to avoid.”

Some legionaires, more inclined toward outright  violence for the sake of violence, went further in their plots to rid America of  those they called undesirables than fearmongering and night riding. It was  alleged, for instance, that Major General Lupp had explored ways to inject  typhoid germs into milk and cheese delivered to specific undesirable  neighborhoods in Detroit. The fact that Lupp was an inspector for the Detroit  Department of Public Health lent some credence to this story, in the minds of  many who heard it.

Labor and civil rights lawyer Maurice Sugar, who  believed he was targeted for death by the legion, claimed that his  investigations had uncovered a plot by the legion to release cyanide gas in  synagogues during Hanukkah in 1935, although no official investigation supported  the allegations. There was clear evidence, however, that Sugar’s 1935 campaigns  for a seat on Detroit Recorder’s Court and on the city’s Common Council were  targeted by legionaires for a series of dirty tricks and outright sabotage.

Some politicians supported the legion’s efforts to  preserve the American System against foreign influence and often spoke before  the Wolverine Republican Club, whose members circulated petitions and conducted  get-out-the-vote campaigns for their favorite candidates. Too often, however,  the legion’s political activities tended to violent acts of retaliation against  those candidates running against a legion favorite.

Running through the literature and rhetoric of the  Black Legion was the fear of an international Communist takeover of the United  States. Legionaires were ordered by their superiors to be prepared to take over  federal government buildings with arms at what they called “zero hour,” the date  and time that communists would rise up throughout the United States and launch  their attack on the country. In truth, however, the legion was led by  unsophisticated men, “petty men,” as one researcher has noted, who were most  interested in the “pettiness of personal reform.”

Thus, the legion saw as its enemies not only blacks,  Jews, and Catholics, but also welfare workers and recipients and labor union  organizers. Homer Martin, the first president of the United Automobile Workers  union, believed beyond any question that legionaires had infiltrated his union  for the express purpose of providing inside information to the automobile  manufacturers and that many black knights were members of the “Dawn Patrol,” the  private security force that guarded many Detroit auto plants.

The legion also provided a job service for its  members. Many joined the organization during the economically unsettled 1930s  with the understanding that legionaires would look out for their own in terms of  jobs and promotions. It was alleged that the Packard and Hudson automobile  plants were controlled by the legion and that members would enjoy in those shops  ‘special privileges’ as a result. It is worth noting, in this regard, that later  investigations of the legion revealed that none of its known members were  unemployed and that many of them had positions in the public services.

By and large, the typical Black Legionaire was a  lower-class, Anglo-Saxon male,  poorly educated with few industrial skills, and  were Southerners transplanted to the Detroit area during the heyday of the  city’s industrial growth during the 1920s. Why did they join? They believed that  the American System was being undermined and their obligation was to counteract  that trend

They were also frustrated by the uncertainty generated  by the economic problems of the 1930s and they felt alienated in a large  metropolitan area and within a huge industrial complex. In general, they were  beset by the feeling that, although their ancestral roots in America stretched  back to the nation’s earliest years, they were being left behind; they believed  foreigners were competing for jobs they considered their own, that Jews and  Catholics were supplanting Protestants among the nation’s influential political  and economic leaders, and that racial integration was leading America to social  anarchy.

In the Black Legion, members found a sense of security  and a sense of superiority. For those of a more violent bent, the group quenched  their thirst for adventure and, in some cases, personal injury and murder. Most  especially, the legion provided easy answers to the complex questions that  plagued Americans during the dark days of the Great Depression. As its oath of  allegiance proclaimed, “the native-born white people of America are menaced on  every hand from above and below. If America is in the melting pot, the white  people of America are neither the aristocratic scum on top nor the dregs of  society on the bottom which is composed of anarchists and Communists and all  cults and creeds believing in social equality. … We regard as enemies to  ourselves and our country all aliens, Negroes, Jews and cults and creeds  believing in racial equality or owing allegiance to any foreign potentates.  These we will fight without fear or favor as long as one foe of American liberty  is left alive.”
The murder of Charles Poole broke open the secrecy  surrounding the Black legion. This young man, an organizer for the Works  Progress Administration, left behind a wife and children whose plight was  highlighted in newspaper articles and photographs and raised public support for  a trial and a thorough investigation.

Opposition to the Legion was spearheaded by the  Detroit Conference for the Protection of Civil Rights, representatives of 311  churches, and labor union, farm and fraternal groups in Michigan. Wayne County  Prosecutor Duncan McCrea pledged to bring Poole’s murders to the bar of justice,  a pledge he kept despite accusations by some of those he prosecuted that he had  joined the legion himself. Eleven of the 12 men he tried in the Poole murder  case were convicted, nine by a jury on Sept. 29, 1936, and two in a bench trial.

The Poole murder case, as The Detroit News put it,  shattered the “romantic air”  that had surrounded the legion. “Hooey may look  like romance and adventure in the moonlight,” stated The News, “but it always  looks like hooey when you bring it out in the daylight.”

In the end, 11 members of the legion were given life  sentences for the Poole murder and others that were revealed during the trial  and a subsequent grand jury investigation. Thirty-seven other members were  sentenced to prison terms.

The Black Legion was dead. Its reputation, however,  remained and reached all the way to Hollywood. One of Humphrey Bogart’s  least-known movies was entitled “The Black Legion,” in which Bogart plays a  factory mechanic whose expected promotion to foreman is instead given to a  foreign-born worker. Bogart first joins, then stands up to the legion. Watch for  it on late-night television or ask for it at your favorite video store; it is  rare and worthwhile, and its roots are here in Michigan.

From The Detroit News: http://apps.detnews.com/apps/history/index.php?id=151#ixzz2DXMnq1cU