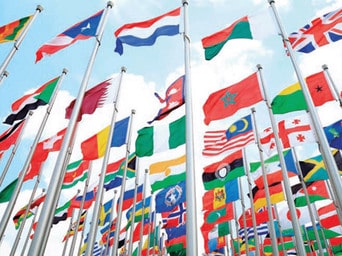 Note: Read a most interesting comment section later where this appeared in Jewish Lobby Bullying Exposed in Australia. The Aussies even showed up to contribute !!

Dear Folks,  Here it is, a piece on United Nations history, a bookend of sorts to the desperately for post war loans one where votes for bought and extorted for the creation of Israel.

I have to hand it to the early Israeli Intel people for pulling one over on Truman. They bribed him at a key moment in his Presidential campaign.

We saw a repeat of that, of sorts, with Netanyahu’s crude attempt to match what is expected Israelis leaders during an election year…sell the Jewish vote whether they really control it or not.

Their real backer was the Soviet Union, who wanted them right near the Suez Canal to create mayhem while the Soviets were figuring a way to take over Europe.

The boat loads of post war Jews were filled with Soviet Jewish partisan fighters. Some of the captured ones even came from the concentration camps where they helped the Germans knock of their Orthodox Jewish opponents on orders from Moscow.

Those Jews who helped kill off their own and then went to Israel as atheist, communist Jews to lay claim that to the ‘Land that God Gave Us’ is one of the Intel coups of history despite it’s sad toll.

Years later a major Zionist, who happened to have been a block commander in the Warsaw ghetto and helped organize the deportations, was spotted on the streets of Tel Aviv by one Jew who survived his work, and took the opportunity dispatch his former tormentor to the lower regions.

There was a big trial of course, where all kinds of nasty things came out about how some of the best Jew killers were welcomed with open arms by the early Zionists, as long as they had helped kill Orth0dox Jews who opposed them. All this is virtually unknown in the U.S. then, and know.

Why did I share all that with you? Well, it’s because I am still pissed off how all the world’s mass media all seemed to lose their UN country vote tabulations last night. All of them. I find that strange, don’t you.

File this away where no one can steal it from you. They may pass a law someday to confiscate these, claiming they are only in the possession of haters.

Voted for the resolution:

Note: I have bolded the more major countries for quicker scanning. Notice how all the Caucuses countries where Israelis have been very active in oil pipeline deals were a clean sweep for the yes column.  Now you see why publishing the list was ‘delayed’.

Voted against the resolution:

Meet the new Hockey Puck and Coconut Brigade, who just happens to have the largest military budget, by far.