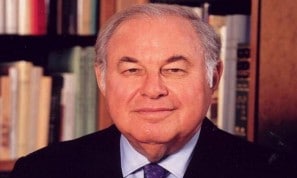 WORLD NEWS TOMORROW –  Octogenarian billionaire mall developer A. Alfred Taubman has been sued for $29 million by a Michigan flight attendant who claimed he sexually harassed her numerous times aboard his private plane.In a complaint filed Thursday with the federal court in Detroit, Nicole Rock accused her former boss, 88, of a variety of improper conduct in the roughly six years she worked for the married father of three.

Rock said this included grabbing her or brushing against her on multiple occasions, forcing his tongue into her ear and mouth repeatedly, tearing buttons off her blouse, and once trying to perform oral sex on her. She also said Taubman urged her to have an abortion after learning that she had become pregnant.

According to the complaint, Rock was awarded disability leave in February 2011 because of the “extreme stress, anxiety, fearfulness and depression” she experienced as a result of her work conditions. She left Taubman’s employ for good that month.

“The allegations contained in the complaint filed in court against A. Alfred Taubman are not true,” Taubman’s office said in a statement. “Mr. Taubman will address the complaint through the appropriate legal channels.”Thomas Warnicke, a lawyer for Rock, was not immediately available for comment on Friday.

The $29 million is 1 percent of Taubman’s net worth of $2.9 billion, as estimated by Forbes magazine in September.Taubman lives in Bloomfield Hills, Michigan, and started the mall empire Taubman Centers Inc in 1950. He is also a prominent philanthropist.

In 2002 and 2003 he served roughly nine months in prison over an art auction price-fixing scandal at Sotheby’s, which he bought in 1983. He no longer has a controlling stake.The case is Rock v. Taubman et al, U.S. District Court, Eastern District of Michigan, No. 12-15244.