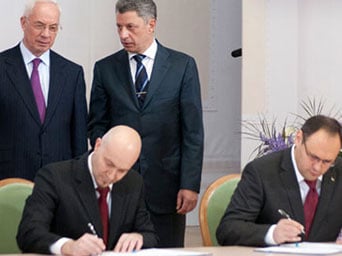 WORLD NEWS TOMORROW– It was the deal of the century, a $1bn contract for a brand new gas plant that would rescue Ukraine from its dependence on energy supplied by Vladimir Putin’s Russia.Prime minister Mykola Azarov oversaw the signing ceremony as a video feed appeared to show welders already at work on the liquid gas plant and the representative of the Spanish company Gas Natural Fenosa, Jordi Sardà Bonvehí, put his name to the agreement.

Not until several days after the event on Monday did it emerge that no one at Gas Natural had heard of Bonvehí. “This person does not represent the company,” a spokesman for the firm said.”Gas Natural Fenosa has not signed any contract to invest in a LNG plant project in Ukraine,” the company added. “Nor does it have representatives working in Ukraine on this issue.”

The deal had been hailed by the Ukrainian government as a chance to free the country from the Russian yoke. Vladislav Kaskiv, head of the state investment agency, reportedly proclaimed the signing to be Ukraine’s “energy independence day”.Little is known about Bonvehí, who reportedly gave the name of Gas Natural’s communications boss Jordi García Tabernero as his link at the company headquarters in Barcelona – but company sources said the two had never met.

Bonvehí hails from the small Catalan town of Sant Vicenç de Castellet, though relatives in the area told the Guardian he had moved away.He reportedly previously worked in the real estate sector but now styles himself as a representative of Spanish companies in the Ukraine.

“I thought I could sign it and then settle it with the company,” a man claiming to be Bonvehí told Reuters by mobile telephone.Investment agency officials said Bonvehí told them Gas Natural Fenosa officials were on the way, but had been held up “for technical reasons”.”He expected the company would confirm his powers [as a representative],” an official said.Kaskiv said Ukraine would press ahead with the project, which also saw it sign a genuine deal with US company Excelerate to provide machinery.

“The Spanish company’s possible refusal to take part in the project will not be critical,” he said. It was not clear who might take up the 75% of the consortium that had originally been destined for Gas Natural.Ukraine is currently reliant on gas coming by pipeline from Russia, leading to constant friction and complaints that Moscow is bullying the country. It had hoped the new plant would allow it to import gas more cheaply.