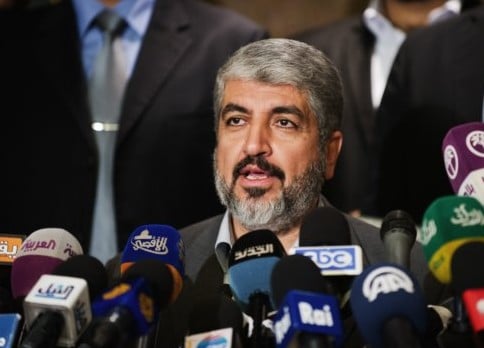 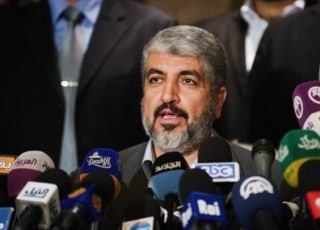 Hey readers, I’ve got a scoop. It’s the text of a letter – don’t ask me how I got it – from Israeli Prime Minister Netanyahu to Hamas leader Meshal.

It was hand delivered in Gaza by one of Israel’s many Palestinian collaborators who lives there.

Like most if not all others of his kind, the poor man didn’t volunteer to spy for Israel. He was “recruited” after being told that his wife would be raped if he didn’t provide information for Israel.

Many years ago, as I noted in my book Arafat, Terrorist or Peacemaker?, Abu Iyad, Fatah’s intelligence chief, told me that most Palestinians who became Israeli assets did so because they were told that their mothers, or their wives, or their daughters or their sisters would be raped if they didn’t do what Israel’s security agencies wanted. “It’s Israel’s standard procedure,” Abu Iyad said. (During Israel’s ground and air assault on Beirut in 1982, a Palestinian woman came to Abu Iyad and confessed that she was an Israeli agent, one of 30 who were reporting on Arafat’s movements to enable Israeli jets to zero in and bomb him to pieces. Abu Iyad had the other 29 rounded up and shot. He didn’t tell Arafat until they were dead because he knew the chairman would have insisted on mercy and forgiven them).

The envelope containing Netanyahu’s letter was addressed to “His Excellency, Khaled Meshal.” The letter itself was to “The Palestinian Terrorist Leader.”

The text was as follows:

I thank you with all my heart for your speech in Gaza confirming that Hamas wants no compromise with the Jewish state which, you said, must be liberated, destroyed, “inch by inch.”

Why am I moved to thank you?

You have solved what was threatening to become a serious problem for me.

For some months past European leaders and even people with an inside track to my very, very dear friend Barak Obama have been telling me that I do not understand Hamas’s real position.

Time and time again I have been told that if I want to do what is best for Israel, I must look beyond the rhetoric Hamas leaders use to keep hope alive in the hearts and minds of their supporters and Palestinians everywhere.

Hamas’s real position, I have been told, is that while it will never, ever, recognize Israel’s right to exist, it is prepared to accept the reality of Israel’s existence inside its pre-1967 borders, The obvious implication, I have been told time and time again, is that Hamas has become pragmatic and is prepared to negotiate on the basis of an end to Israel’s occupation of the West Bank including East Jerusalem, to enable the creation of a Palestinian state which would live in peace with an Israel as envisaged by the letter and spirit of UN Security Council Resolution 242.

We both know this is a deception on Hamas’s part. You revealed its true face in your speech in Gaza. You want to destroy the Jewish state.

Thanks to what you said in Gaza, I can now look European and other leaders in the eye and say, “It’s not me who doesn’t understand Hamas’s real position, it’s you.” And if they continue to tell me I should accept Hamas as a party to negotiations, I can and will tell them to go to hell.

As I told my cabinet colleagues shortly after you had spoken in Gaza, if we handed over territory in Judea and Samaria, we’d be inviting rocket and missile attacks from there on Tel Aviv. And that, I told my colleagues, is why no government I lead will ever bow to international pressure and put Israel’s security at risk.

The old year is about to end and my wish is that you won’t see a new one.

All I want to add for the sake of discussion of the kind I once had with Arafat is this.

The notion that a Palestinian state would launch attacks on Israel from the liberated West Bank is absurd in the extreme. What would happen if it did? Arafat’s answer in more or less the following words was this: “The Israeli Goliath would roll over the Palestinian mini state and crush it out of existence, and it would do so with the understanding and support of the world.”

Arafat added, and surely he was right, that having struggled so long for some justice, his people would not be mad enough to give Israel the pretext to close the Palestine file for ever.

The only madness is in the mind of Netanyahu and more than a few of his cabinet colleagues.

And one more point. The man who is contributing most to the process that may well lead to the destruction of the “Jewish state” is Netanyahu himself. If that was only my Gentile opinion it would not matter, but there is today a small but growing number of Jews, including some Israelis, who are aware of this and saying so.

In that light Meshal could respond to Netanyahu’s letter with these words: “No, prime minister, it is me who has to thank you for what you are doing to destroy your state!”