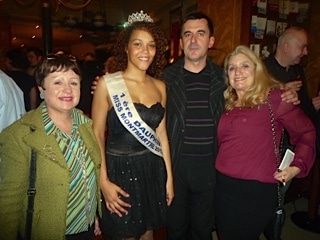 The Prix-Wepler celebrated its fifteenth anniversary on November 11, 2012. Brasserie Wepler, a frestaurant here in Paris  famous for its seafood and oysters, located at 14 rue de la Place Clichy, near Montmartre has been hosting the Prix since its beginning.  The restaurant, which started out as a lemonade stand, is over a hundred years old.  Famous authors such as Céline, Max Jacob and Henry Miller met here for dining and conversation. . When we saw a photo of this on the wall  from 1950, with Brasserie Wepler called Bar Americain we asked a waiter about this title  and he said that  at that time Wepler was  a very big  brasserie  and included what is now the Cinema Pathé-Wepler, a large movie theater located adjacent to the outside café of Brasserie Wepler.

Each year authors whose works are not well-known and not written for commercial purposes  compete for the prize. Brasserie Wepler closes its doors to customers to
host an elegant soirée.  Michele Bessière loses the revenue for the evening and also provides food and beverages to the guests.

A new experience this year was  a magician doing a magic show. He did many great feats including making water in a glass disappear, creating and making fire from a cigarette lighter  and making snow.  The audience liked the show and applauded loudly.

To clebrate fifteen years, Marie-Rose Guarniéri  had two video production persons  Mathide Salve and Alexandre Lazar make twelve films  from twelve books that the jury selected. In each film, a small portion of the text was read to coordinate between the visual and the oratory.

As a special way  celebrate the 15th anniversary  Michele Bessière,owner of Wepler, orignally from Aveyron designed  a special  “collector knife” from a company in Laguiole where the best knives in France are made and gave them as presents to former award winners, certain journalists and organizers

The jury who selected the first prize winner and the honorable mention winner, Marie-Rose Guarniéri, a member of Fondation de la Presse and the owner of Wepler Restaurant  Michel Bessière  mounted  the stage.  Each year the jury changes and is composed of  readers, journalists,  book store personnel,  Marie Rose Guaraniéri and Elizabeth   Sanchez  Secretaire Général Prix Wepler-Fondation de la Poste.  We waited anxiously to see who the winners would be.

Leslie Kaplan, a native New Yorker   who grew up  in Paris ,  won the first prize of 10,000 Euros for her novel  “Millefueille ” ( Publisher  Editions  P.O. L.)  She studied philosophy, history and psychology. She worked two years in a factory and participated in the movement of May, 1968.  “Millefeuille” is the story of an old professor of literature  who knows he is heading for death and his inner conflict to live. It is  about the muti dimension of human existance and also about the rapport between generations: an old person and the young people;  Leslie said it was a pleasure for her to write. She told us that she was honored to receive first prize.

Jakuta Alijkazovic  received the award of  Mention Spécial ,Honorable Mention, created in 1999 and 3000 Euros for her book “La Blonde et le Bunker” (publisher L’Oliver ). It is a novel about three people: a wife, a husband and a lover who all live on different floors in the same house. The author also won a prize in 2007 , Le Prix Concourt for her book “Corps Volatile”.  Jakuta told us that she was honored and thrilled to win the prize.

After the prize, we enjoyed the fine food  and drinks Brasserie Wepler offered. There were many hors d’oeuvres, hot and cold, champagne, wine and soft drinks. It gave us the opportunity to meet the attendees.  Our friend Martine Lequantrec from Association Montmartre en Europe intoduced us to several  prominent people. We enjoyed meeting Michel Langlois who is the president and director of a publication ”Montmartre à la Une;” He said he is a friend of Michèle Bessier and likes to eat at Wepler especially the  French specialty dishes which are delicious. He likes literature and authors who are not so well known. Michel said it is important to buy the books. Then he invited the three of us to his special celebration of the ten year anniversary of  his publication.  Next we met two ladies, video production students,who  assisted with the filming of the books. We also met others told us that they came to learn and discover things. Several people told us that they prefer paper books to e-books.

Then we met Miss Montmartre, Sandy Laderiere, who came with her sponsor. She is beautiful and very friendly.

Afterwards we danced to music played by a good D.J. The crowd loved his selection of music and there was plenty of room on the dancefloor.