Home Veterans Netanyahu for Anti-Christ? He’s got my vote! 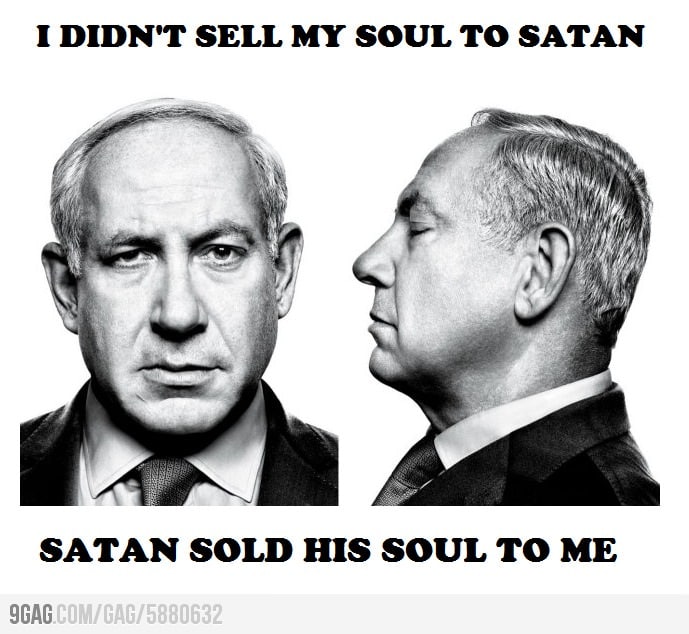 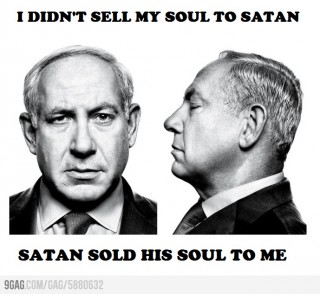 The political genius of Benjamin Netanyahu knows no bounds.

By staging a mass human sacrifice in Gaza, the Israeli PM has earned the approbation of the 81% of Israeli voters who relish the blood of Palestinian children. (I pity the other 19%, who are stuck living in a nation of sadists and ghouls.)

By turning the majority of his countrymen into demons who gleefully feast on the flesh of dead and dismembered children, Netanyahu has demonstrated amazing political acumen. His mass human sacrifice has virtually guaranteed his re-election as Prime Minister of Israel.

But why should he stop there? While the office of the Prime Minister of the State of Israel is indeed a respectable position in the demonic hierarchy, there is no reason why such a talented Prince of Evil as Netanyahu should be content to rest on his laurels.

It’s time for him to start grooming himself for a run at the number one position – the top dog, the big enchilada.

It’s time for Benjamin Netanyahu to consider running for Anti-Christ.

After all, the man has impeccable credentials.

Honestly, I can’t think of a better Anti-Christ candidate. He’s got the moves, he’s got the style, he’s got the blood on his hands – and the potential to drench those hands in a whole lot more blood.

The lies drip from his tongue like a fetid river of boiling hot pus.

British author Stuart Wilde gets it right in his essay nominating Netanyahu for Anti-Christ, reprinted below.

I’m already printing up the bumperstickers:

Netanyahu for Anti-Christ: He’s got my vote!

The Bible says the Anti-Christ will be a Jew. I wondered if the Israeli P.M. Netanyahu might be the “one”. He’s cold, cruel, violent, and a racist to boot. So he has qualities that would stand him in good stead at the Anti-Christ job interview. But the Bible says the Anti-Christ will win the world over with talk of peace, that doesn’t really fit Netanyahu’s modus operandi. And then because his karma must be the worst of any man standing on the planet, you can’t imagine him being around long enough to do a decent job as an Anti-Christ.

But if he bombs Iran the world will go broke, as oil will shoot up at the pumps, and refineries might be destroyed in the Gulf, never to produce again. Then Netanyahu could be crowned the Anti-Christ for bringing the world to its knees.

The Anti-Defamation League is tasked with the job of making sure no one says or writes anything against Israel or the Jews. They evoke terror over main stream journalists because of their vindictiveness. White House correspondent Helen Thomas lost her job and she was stripped of her lifetime achievement award for making a remark the Jews didn’t like. She was not anti-Semitic, she just expressed an opposing view. Brutal eh? But there are hundreds of thousands of Internet journalists around the world who don’t work for the Jewish media, CNN, CBS, ABC, NBC, or the Jewish print, The New York Times, Washington Post, LA Times, USA Today, etc. So they have no fear of the Jews or the ADL. That is why the time of the ADL’s thought police must soon be over.

People know the anti-Semitism rant is just a ploy, it’s little to do with facts, it’s used to control criticism and political comment. No one gives credence to the hypocrisy of the bent news anymore. There are hundreds of millions of Internet pages exposing the truth of what the Israeli government does.

Reading the Internet as I have to everyday, I have found no anti-Semitism to speak of, expect a few Neo-Nazi sites, people are respectful, so I see the spite of bodies like the ADL as not necessary. They need to embrace the New Age and dance with the hippies and loosen up a bit. And anyway, the Jews are often deeply racist. They hate the Christians and non-Jews quite openly, and their religious book the Talmud, says killing a Christian is pleasing to God. If the ADL investigated all types of defamation they might serve a purpose, but their function is to hold up their lies and obscure the truth. The world needs a Middle Way now, not terror and the fascist mind set.

That was a shock when I read the part about killing Christians. That is “anti” the message of love and peace of the good Jew, Jesus Christ. It’s a racial violence that the Christian world can’t really understand.

The Jews deliberately bombed a Russian TV station (RT) in Gaza because it is the voice of unbiased comments about Israel, so now some say Netanyahu is a good thing for world peace, as he’ll get Israel rubbed out, and all the wars will be over. All evil meets a superior force up ahead. The CIA published a report called, “Preparing for a post-Israel Middle East” and Henry Kissinger says the country won’t last ten years. High up people know things we don’t know.

If Netanyahu pulls the trigger against Iran or if he cons America into it, then he could become the anti-Christ, and if he doesn’t, he’ll be just another loveless, tin pot butcher that fell along with Idi Amin, Pinochet, Ceaușescu of Romania, Mussolini, Stalin, Gaddafi, Pol Pot, Hitler, and a list too long to mention them all. I feel sad for him, he can’t see the disaster he is in the process of making for the Jews, they don’t deserve him. Bombing the Russians was idiotic. The faster the Jews get shot of Netanyahu the safer they will become.

We have to care for the Jews and make sure nothing goes wrong, and then if it is their karma to fall with Netanyahu there is nothing anyone can do to change their destiny, so we must pray for the best outcome for them and the world, no matter what.