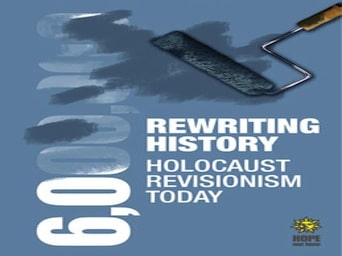 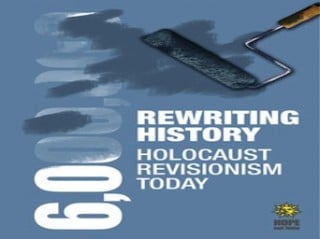 This week, a new Jewish ‘progressive’  text has been published which you simply must read and circulate around – not because it’s any good, quite the opposite, it is, as usual, just a window into a tribal psychosis and a glimpse into morbid, Jewish, progressive nonsense.  The reason you should read and spread  ‘Rewriting History, Holocaust Revisionism’ is because it is a delightful journey into Jewish political despair. They are losing the battle and they know it.

‘ Hope not hate’, presents itself as a ‘left anti racism’ campaign and claims to ‘celebrate Britain’s diverse society’. So why does it engage in relentless thought-policing?  The answer is that, though ‘HOPE not hate’ claims to oppose the British ‘far Right’, if you dig a little and you will find that HOPE not hate and its leader Nick Lowles are integral parts of the Zionist network, dedicated to promoting Jewish tribal politics. 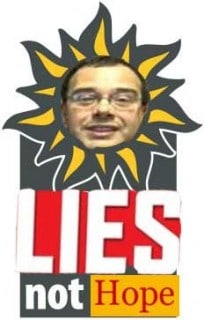 Last year I exposed ‘HOPE not hate’ as a Hasbara unit and as an offshoot of the notoriously Zionist Searchlight magazine. At the time, ‘HOPE not hate’ had exhausted itself in a huge campaign to cancel a performance of mine at a Marxist Arts Festival in Bradford and, in order to have any chance of success, joined forces with the infamous Zionist Board of Deputies of British Jews (BOD) and the openly Islamophobic blog Harry’s Place. Lowels and his HOPEless organisation were both utterly defeated and why, because the  Marxists who invited me knew very well who Lowels was and what he stood for.  Again, a few month ago, the ‘anti’ racist Lowles campaigned against a Muslim conference. You get the picture. Zionists to the core, both ‘HOPE not hate’ and Lowles are actually united against anyone and everyone who challenges Jewish power, supremacy and racism .

But here’s the good news.  Lowles is unbelievably clumsy and never fails to expose himself and his minders as just one more hard core Zionist tribal operation.

On Thursday this Zionist propaganda unit published this latest book, now available online for free. Seemingly, our ‘anti’ racist campaigners want to stop Brits from looking into the past. For some reason they, who claim to ‘celebrate Britain’s diversity’, do not want Brits to re-visit, re-vise and certainly not re-write their history.

But Lowles, himself an ex Jewish student activist, is not against revisionism in general. He is not against Israelis dismissing the Palestinian holocaust – he has no quarrel with Nakba denial. Nor does he oppose the deniers of the Arminian Holocaust. And for some reason, HOPE not hate is also strangely silent  about the Ukrainian holocaust, the  Holodomor – that according to prominent Israeli Zionist writer Sever Plocker and others, was largely inflicted by Stalin’s Jews. Nick Lowles and ‘HOPE not hate’ are completely uninterested in the denial of any holocaust – any, that is, except one.

The book is false from beginning to end but it does reveal what Zionists are trying to hide and the manner in which they do this. It is not clear who wrote this nonsense – an unknown David Williams is credited as the author, but we have no idea who he is and what are his credentials. Unlike revisionist texts that are, in most cases, meticulous as far as scientific details and bibliographical details are concerned, Rewriting History lacks all bibliographical reference and all other minimal academic requirements, so vital when dealing with such sensitive material. You’d think that the famed ‘people of the book’ would come up with something a little better than this.

But it’s funny, that’s for sure. Just check the first sentence. “Five years ago I was fortunate enough to visit Auschwitz, in Poland, with the Holocaust Educational Trust,” writes Lowles. No kidding. For those who do not know it, The Holocaust Educational Trust (HET) is a Jewish ultra-Zionist outfit, charged in the UK with Shoa indoctrination and like Nick Lowles, it is interested only in the Shoa of one people and one people only. Visiting Auschwitz with the HET is probably as informative as sightseeing tour in Gaza concentration camp  in the company of Tzipi Livni.

Ideologically and intellectually the book can be demolished in a paragraph. Lowles and his HOPE-less comrades have not a clue what History is and what it stands for. They cannot grasp that our knowledge of the past is meaningful only as long as it evolves, that the past becomes significant only when it is re-written, re-visited and revised. ‘History is the art of revision’.

Here is a good example. The term ‘ethnic cleansing’ is relatively new to us all and appears to have been popularised by the international media around 1992, following the discovery of Bosnian-Serb concentration camps and the subsequent assault on Sarajevo – it was only after this that Israeli and Palestinian historians integrated the notion of ‘ethnic cleansing’ into their discourse. Forty-five years after the mass expulsion of Palestine indigenous population they understood that the Palestinian Nakba was simply a ‘Zionist ethnic cleansing’. In practice, they rewrote Palestinian history and re-presented facts within a broader universal narrative. Rewriting the past is what historians do and rewriting history is inevitable – it cannot be stopped or silenced, not even by a dysfunctional Hasbara unit within the ‘left’.

But it goes further. For many decades Europe was tormented by guilt. Those devastating images of liberated camps and Jewish holocaust survivors have stagnated into European ethical paralysis. For decades, this guilt was exploited by Israel and its messengers. The West kept silent when the Palestinians were expelled in 1948, forgave when Israel adopted its racist laws of return (not one bit different from Nazi Nuremberg Laws), and was understanding when Israel expanded and celebrated its racist symptoms at the expense of its neighbours. But now, this is all changing.

After six decades of Israeli constant abuse of every possible human right, we start to see a tidal wave of resentment towards Jewish power and the Jewish state. It is more than likely that in the light of this change, Europeans will revisit their past and will rewrite it. Britain may even be courageous enough to look, for the first time, into its own crucial role in the destruction of European Jewry. How many people in Britain know that, at the time Nazi Germany was harassing its Jews, Britain closed its gates to Jewish refugees? How many people here grasp that Britain was complicit in the destruction of European Jewry?

Modern, diverse Britain, with its most precious asset, freedom of speech, is a wonderful thing – I came to this country because of it – and I am willing to fight for it. Nick Lowles and ‘HOPE not hate’ are the enemies of diversity and tolerance. They want us to stick with the Zionist Holocaust Educational Trust and their Judeocentric vision of the past but they don’t stand a chance. Our past, like our future, belongs to us, I mean all of us- and as we progress, we will always revisit, revise and rewrite it. This form of activity is inherent to human nature.

p.s. In the next few weeks I will publish detailed deconstructions of each chapter of ‘Rewriting History, Holocaust Revisionism’.