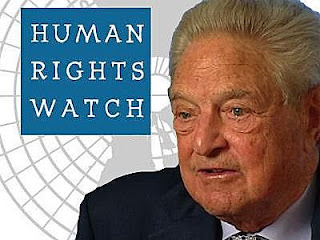 This week we learned that Human Rights Watch (HRW) has expelled from its ranks top U.N. official Professor Richard Falk.

The juicy details have been kindly supplied by Israeli Hasbara outlet UN Watch blog.“We commend Human Rights Watch and its director Kenneth Roth for doing the right thing, and finally removing this enemy of human rights from their important organization,” said Hillel Neuer, a rabid Israeli supporter as well as Executive Director of UN Watch. “A man who supports the Hamas terrorist organization, and who was just condemned by the British Foreign Office for his cover endorsement of a virulently antisemitic book, has no place in an organization dedicated to human rights,”

Hasbara stooge that he is, Neuer using every Zionist trick in the book, misinforms and misleads his readers. First of all, Hamas is not a ‘terrorist organisation’, it is a democratically elected government and the book to which Neuer refers is obviously mine – ‘The Wandering Who’ – which, was endorsed by Richard Falk and some of the most important humanists and scholars of our time– a book which has been a best-seller for six months in both Britain and the USA, has been translated into 10 languages and is available in seven editions in countries that all strictly legislate against any form of racial incitement as well Holocaust denial. The fact is that the Zionists and their ‘Progressive’ twins will have to accept that The Wandering Who is, after all, strictly kosher.

So, Professor Falk did indeed endorse my book and, like all my other endorsers, did not cave into pressure. This should indeed concern all Zionists and their agents.

“A transformative story told with unflinching integrity that all (especially Jews) who care about real peace, as well as their own identity, should not only read, but reflect upon and discuss widely.” Professor Richard Falk on The Wandering Who

But the problem is not the tribally oriented UN Watch and its Zionist Executive Director. After all, they only do what we expect Zionists to do – lie, harass, abuse, and, if necessary, fabricate evidence. No, far more interesting is the behaviour of the allegedly ‘progressive’ ‘Human Rights Watch’ and its director Kenneth Roth.

On the face of it, HRW is an independent, Non-Governmental Organisation (NGO) ‘dedicated to defending and protecting human rights’. But it takes no more than a few seconds of research to find out that the primary donor of the HRW is liberal-Zionist George Soros and his Open Society Foundation – the same Soros and ‘Open’ society that supports most Palestinian NGOs including BDS which may perhaps explain why the BDS in Ramallah was so eager to compromise on that most precious Palestinian right i.e. The Right of Return. Nor will it surprise you to learn that the same Soros funded HRW has been dedicated to ‘exposing’ of Hamas’ failures on human rights issues? Is this not what you would expect from a liberal Zionist spin meisters?

In my new satirical work, A Glossary of Zionist Power which I am now completing, I include entries for Soros and his Open Society. In the book, Soros is a ‘Jew who supports a lot of good causes that are also very good for the Jews’ and The Open Society Foundation ‘is dedicated to the transformation of deprived people into Guardian readers’. Surely I will now have to add an entry for the HRW and Roth. Both are nothing short of ‘Zionist fig-leaves’ and, like all Jewish progressive outlets that are dedicated to Jewish tribal and ethno centric campaigning, HRW is there to monitor, control and even stifle any criticism of Israel if it should ever get too close to the bone, i.e. touching on the Jewish character of the Jewish state,

Prof’ Falk had little chance of surviving within such a tribal milieu and the reason is pretty simple. Unlike Zionist Neuer, Liberal Zionist Soros, and ‘Anti-Zionist Zionist’ Roth, Prof’ Falk actually represents the ultimate success of the Zionist project. Early Zionism promised to transform the Jews into ‘people like all other people’. Zionism vowed to bring to life a Jew who transcends the tribal, a Jew who thinks universally and ethically. Early Zionists also believed that such a transformation could be achieved only in Palestine. Of course, they were wrong but no one can ignore the fact that the greatest and most prolific Jewish universalists are actually Israelis (Prof’ Yishayahu Leibovitch, Prof’ Israel Shahak, Nurit & Miko Peled, Gideon Levy, Amira Hass, Uri Avneri, Ilan Pappe, Israel Shamir and many, many more). But Prof’ Falk and a few others have managed to achieve a similar goal in the Diaspora. Those Jews whom we most admire and whose integrity we most trust such as Prof’ Norton Mezvinsky, Prof’ Norman Finkelstein, Prof’ Falk  – all have something in common – they do not operate within Jews-only political cells. Unlike JVP, IJAN, HRW and Mondweiss, all of whom are dedicated primarily to promoting Jewish interests, they are dedicated to universal values.

So I argue that Prof’ Falk provides us with a glimpse into the possibility of true Jewish emancipation – the capacity to break out of the mental, intellectual and non-ethical ghetto. Moreover, this latest tale of HRW’s Herem (Kosher expulsion) of one of the greatest humanists of our generation is actually an educational event.

For many years, many of us saw Zionism and Israel as the mother and father of contemporary evil, but now, many of us have come to realise that Jewish progressive politics is every bit as sinister but, unlike Zionism that is only tainted with deception, the Jewish progressive discourse is inherently dishonest – it speaks universal but it thinks tribal.

While our disagreements with Israel and Zionism are clear, the Modus operandi adopted by AZZs and their relentless attempt to dominate the progressive discourse while, at the same time, stifling freedom of expression leaves more and more humanists suspicious of any form of Jewish politics – be it right, left or centre.

I like to think that my Wandering Who was the first attempt to discuss these issues openly. I wrote it because I, too, am a wanderer who decided, instead of dwelling on someone else’s land, to leave my homeland. Perhaps Prof’ Falk endorsed my work, because, like myself, he too is a wanderer. He self-reflects, examining his identity and his notion of justice from a transcendental point of view. Like myself, he is an artist, a poet, a man who searches, against all the odds, for beauty, peace and truth. On the other hand, George Soros’ Open Society Foundation  contributed $100 million to HRW just to silence ethically and aesthetically driven souls such as Prof’ Falk and others.

The Wandering Who? A Study Of Jewish Identity Politics in general and Jewish progressive spin in particular Amazon.com  or Amazon.co.uk