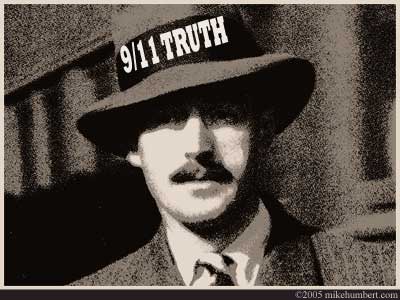 While spending a week recuperating from an 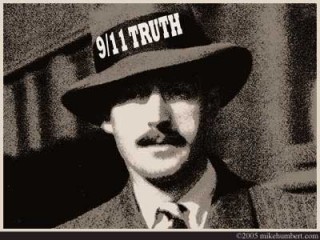 Sounds impressive; but I only had to read five novels.

Conclusion: If Dashiell Hammett were alive today, he would be an outspoken 9/11 truth movement supporter. And he would be vilified, boycotted, and blacklisted. His books would be out of print, and his name would be taboo in the mainstream media. He would never be on any of the talk shows – except, of course, on Press TV.

The overriding theme of Hammett’s oeuvre is identical with that of the truth movement: Power, in the almost unimaginably corrupt US of A, operates very differently, and far more ruthlessly and mendaciously, than the sanitized depictions of events presented by the mainstream media to the unsuspecting public would lead the naive observer to believe.

Hammett’s disillusionment with the corrupt ways of power in America led him to become a Communist – a mistake, but an understandable one. He  was vilified, boycotted, and blacklisted for his pains. Worse, he was sent to prison, where his already tenuous health was destroyed. He died of TB a few years after his release.

In four out of five of his novels, the hero is a private detective – an odd choice for a communist writer. The hero of the other novel, The Glass Key, is a private political operative and gambler – a sort of vastly more honest and humane version of Karl Rove. (Yes, I know that isn’t saying much.)

Hammett’s detective heroes – the Continental Op, Sam Spade, and Nick and Nora Charles – confront a long and bloody series of crimes, most of them false-flags, committed by the wealthy and powerful in service to maintaining and increasing their wealth and power. Inevitably, patsies are framed; the police and the mainstream media are hoodwinked; yet miraculously, thanks to the insights of the unusually perceptive hero – the only one smart enough to always doubt the official story (indeed, anybody’s story) – the truth, or a reasonable facsimile thereof, finally emerges.

Sound familiar? Well, yes, sort of – all but that last part.

Today, we are inundated with bad fiction, whether written or audio-visual, depicting conspiracies and false-flags and the big lies of the wealthy and powerful. But all of this bad storytelling serves to bracket its subject matter as “just fiction.” Nobody comes out of the theater saying, “yeah, this X-files-type conspiracy film really unveiled the way power actually works; I’ll never believe another word from the mainstream media.”

Hammett’s stuff leaves the opposite impression: THIS, and not the mainstream media garbage, shows how power actually works.

Read Hammett, and you’ll cancel your newspaper subscription, throw a brick through your TV, and start following Press TV and Veterans Today on the internet.

Hammett’s first novel, Red Harvest (1929) was named one of the 100 best novels of the half-century by Time magazine. In it, the Continental Op witnesses a Montana town, a stand-in for Anywheresville USA, implode into a toxic cesspool of greed, lies, and ultra-violence driven by the behind-the-scenes criminal gangs (read: Rothschilds, Rockefellers, etc.) that run the show from the shadows.

In Red Harvest, the Continental Op faces a soul-shaking moral dilemma: If the only way to try to bring the bad guys down is to trick them into fighting each other, is the extreme violence that results something you can live with? Especially if a part of you that you don’t much like is starting to enjoy it?

Rarely has the horrific violence that lurks beneath the surface of ordinary American life been more convincingly depicted.

Hammett’s second novel, The Dain Curse, addresses that all-too-American phenomenon: The murderous rampages of a satanic cult whose real raison d’etre, of course, is money and power. Shades of the Franklin Scandal, the Finders of Lost Children, the revelations of Kay Griggs, the depredations of Michael Aquino, and the 9/11 scenario depicted in SK Bain’s The Most Dangerous Book in the World.

The Maltese Falcon, Hammett’s third novel, may be his best known, thanks to the Bogart film. The novel’s eponymous macguffin, a black bird-statue beneath whose surface lies a treasure of gold and jewels, represents worldly desire in general, and the lust for money and power in particular. The colorful yet ultimately pathetic characters killing themselves and each other in its pursuit represent the American people in general, and the ruling class in particular. Conspiracies, needless to say, abound.

Hammett’s fourth novel, The Glass Key, deals directly with the crimes and shenanigans of the political class. As in Red Harvest, we learn that surface political life – the stuff that appears in the newspapers – is a pack of lies. Real power is held by the wealthy criminal gangs that run everything from behind the scenes (and, of course, own the newspapers).

Hammett’s fifth and final novel, The Thin Man, was immortalized in a film with William Powell and Myrna Loy. It obliquely addresses the way murderous Wall Street lawyers and financiers loot the wealth of those who actually invent and produce things. Said looting is aided and abetted by the near-complete moral collapse of American society in general, and its wealthier, greedier members in particular.

By the way, did I mention that Hammett’s novels are a lot of fun? The crisp, humorous, stingingly  sarcastic dialogue is something to behold. The characters, unfortunately, are all-too-real. (Hammett stated that they are all based on real people and real crimes he encountered during his detective years.) And the plotting manages to be both intricate and coherent. This is about as good as gritty American realism gets.

So if you ever get tired of reading non-fiction about the 9/11 inside job, the Franklin pedophile scandal, the inside-job murders of JFK, RFK, MLK, Wellstone, and so many others; the MK Ultra mind-control and assassination programs; the banksters’ attempt to build a “New World Order” prison planet; the infinite number of ways that, as Smedley Butler put it, war is a racket; and the other all-too-real crimes of the rich and powerful…take some time off to enjoy Dashiell Hammett’s fictional truth-seeking.