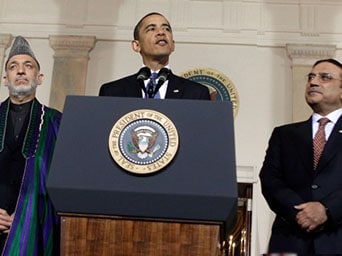 Eleven-year war has not only given tremendous experience of fighting guerrilla war to both Army and militants but also has removed inhibitions and fears of each other. The militants could not have continued fighting for so long without external support and safe sanctuaries across the border. On the other hand, unlike the US military which is supported by Army contingents of 48 countries in Afghanistan, Pak security forces are fighting the war against militants at their own with meager resources and their performance has been much better than ISAF.

The low intensity conflict has caused substantial wear and tear to the weapons & equipment of Army and Frontier Corps (FC) and has also fatigued the troops living away from families and peacetime stations and living amid hazardous environment where life has become cheap. Situation will further worsen in coming years since militancy has spread to every nook and corner of the country.

In 2007, there were active plans to handover frontline security duties to FC and Frontier Constabulary duly trained by the Army and US trainers. The US and British trainers had been imparting training to FC men in Warsak and some other locations from 2005 till November 2011. Not only several FC wings were raised to make additional battalions, their scale of weapons and equipment was also enhanced to add to their firepower and to enlarge their scope to carryout defensive and offensive tasks independently. By now, the FC has been sufficiently trained and enriched with considerable experience to tackle militant threat along the border regions independently. However, except for Balochistan, so far the FC has not taken over frontline duties in northwestern regions and relieved the Army’s 147000 troops engaged in fighting war on terror.

Opinions on war on terror whether it is our war or someone else’s war, and whether talks should be held with militants or not are sharply divided. Those claiming that it is not our war far exceeds those who think otherwise and view it as Pakistan’s existential war. This division in perceptions is to the advantage of militants and disfavors security forces embattled with militants.

It will be incorrect to assume that both external and internal intelligence shields are to be provided entirely by ISI. The ISI’s primary responsibility is to act as a first line defence against external threats. Its internal wings primarily assess the pulse rate within armed forces and also perform counter intelligence duties. Its political wing has been dipping into political affairs of the country, but it is heartening that the same has been abolished.

The IB, Special Police, FIA and CID all under Ministry of Interior are principally responsible for internal security but have somehow taken up a backseat and left everything to the ISI and MI. Notwithstanding the urgent need to bring greater harmony between different agencies and to harness all intelligence resources and bringing them under one roof for national level coordination, there is a need to define the areas of responsibility and scope of each agency to avoid of duplication of work.

The US devised an effective homeland security system which helped in thwarting 9/11 type recurrence. In 11 years, no terrorist incident has occurred in USA. Likewise, Europe has also put in place modern techniques to prevent terrorism. Other than bombings in Madrid and London, no major terror incident has taken place in any European country. Even India has improved its security system. On the contrary, Pakistan which is the worst victim of terrorism has yet to devise a credible homeland security system to foil acts of terror.

With the death of Osama Bin Laden (OBL) and several al-Qaeda senior leaders as well as its operatives in Pakistan and Afghanistan, strength of this outfit has substantially shriveled in Af-Pak region but has not sapped. Attacks by Al-Qaeda and its affiliates to avenge the death of OBL were confined to Pakistan only and are continuing. Remnants of Al-Qaeda in Pakistan have become close partners of TTP and other affiliated terrorist groups. The nexus managed to strike sensitive targets such as Mehran naval base destroying two of the three PC3-Orions, Kamra airbase which was aimed at destroying AWACs, and Peshawar airbase to destroy fighter jets and gunship helicopters.

Al-Qaeda is still a potent force in Arabian Peninsula from where it can hit western targets more easily particularly after it managed to enroll many white-skin young recruits in Europe and USA. Talk of infighting within al-Qaeda over leadership may be far-fetched since OBL was out of action since 2002 and Ayman el-Zawahiri was ruling the roost.

Our response to US outright blatant aggression on 2 May was flawed and timid. President and PM responses were out of sync of the public enraged sentiments. Our apologetic stance and prompt acceptance of the US version that OBL was living in Abbottabad for the last five years and had been killed there on 2 May in my view amounted to showing red rag to the charging bull. We should have straight away denied OBL’s existence in Pakistan and should have left it to the judicial commission to find out the truth. Till then, we should have stuck to our point that it was a false flag operation to besmirch the image of the Army and ISI, which was true. We should have drawn strength from the already published versions about death of OBL in December 2001. We should have vociferously condemned US intrusion and cried out that an ally had stabbed an ally in the back which had rendered maximum sacrifices and suffered the most and thus put the US on the defensive. We should have tried to earn the sympathies of the world and forcefully conveyed our point of view that Pakistan is the biggest victim of terrorism and that terrorism is promoted by the ones claiming to fight terrorism. Our sheepishness and timidity emboldened the US to justify its wrongful and immoral act and to further intensify its pressure on Pakistan. Our policy of appeasement led to Salala massacre on 26 November 2011.

The US continues to blame Pakistan for its failures in Afghanistan to hide its military’s dismal performance. North Waziristan (NW) is being described as the safe haven of anti-US militants and sole reason of destabilization of Afghanistan. It is ironic that 130,000 US led ISAF equipped with superior technology and armed drones, six intelligence agencies and 3,50,000 ANSF cannot pinpoint a single terrorist haven or detect cross border movement into Pakistan, but can easily spot terrorist havens in NW and Balochistan.

Kunar and Nuristan are confirmed sanctuaries of runaway militants under Fazlullah from Swat and Malakand and are involved in cross border attacks inside Pakistan, but no action has been taken despite Pakistan’s protests that militants are patronized by Afghan warlords and foreign agencies.

Both Musharraf and Zardari went out of the way to accommodate US legal and illegal wishes. They were successfully brainwashed that the chief threat to Pakistan’s integrity and to their rule was from local extremists and not from India and that the US was Pakistan’s well-wisher. To keep our rulers scared and committed to fight militants with full strength, not only aid was made conditional to its performance in war on terror but also sponsored terror attacks were organized against sensitive installations. Our rulers have got so fixated with the US fed threat that they have become oblivious to the fact that as against the paltry sum of $10.5 billion allocated for the period 2002 to 2010, only one-third was received by Pakistan most of which was payment for services rendered. Army received only $1.8 billion as reimbursements. Against this measly amount, Pakistan has lost over $70 billion in fighting US war.

The much touted yearly $1.5 billion Kerry Lugar Bill aid flowed in at a snail pace. In 2010, only $ 179.5 million was received. For 2011, the promised tranche of $300 million was not paid. In the wake of soured relations, $800 million close support fund was suspended. Investments ceased and economic activity almost came to a grinding halt due to energy crisis and disturbed security and law and order situation. Human losses rose several times higher than the collective losses suffered by coalition forces in Afghanistan while social traumas were incalculable. Pakistan suffered grievously on all counts but our rulers having lost their nerves are still clinging to the aprons of haughty USA despite its discriminatory and distasteful behavior.

The US would like the present political setup to continue till political settlement with Taliban, or else it will make every effort to install another pro-US government in Pakistan, ready to facilitate smooth withdrawal of ISAF by end December 2014. The US for sure will ditch Pakistan if endgame doesn’t culminate the way the US desired.

The writer is a retired Brig and a defence analyst. Email: [email protected]