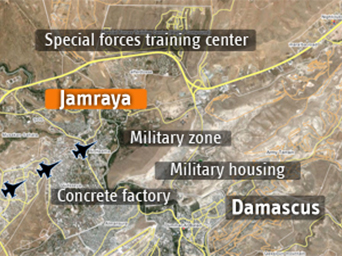 Do you know what love is? I’ll tell you: it is whatever you can still betray.—John le Carré, The Looking Glass War.

A thick fog covered the affair from its beginning. Considering its circumstances, this was unlikely to continue; after all it has been captured on video by several news agencies. The pictures were the same in all the networks; however, the descriptions varied wildly. In the beginning, Israeli media reported that in the afternoon of January 29, 2013, four F16 fighters had entered Lebanon, and left it towards the Mediterranean Sea after five hours. This was not a formal acknowledgment by the IDF, since the main source quoted was the Lebanese army website.
Yet, as it often happens, the Hebrew article warned Syria of transferring weapons to the Hezbollah or of losing control on their rockets. Moreover, Israel announced the deployment of two Iron Dome batteries in its north, one of them next to the city of Haifa.
Shortly afterwards, confused reports were broadcast. Venezuela’s teleSUR reported it at first as two separate events; after a while it dropped its initial report. The first event described an Israeli attack on the Lebanon-Syria border; the second claimed that a research center of the Syrian army located near Damascus had been heavily damaged by Israel. Regardless the report, the images were the same. They showed F16 fighters from below, firing flares. Was this disinformation? Israeli propaganda? Syrian propaganda? It was impossible to tell.

Jamraya
The Spy Who Came in from the Cold

China, Russia, Iran and Syria formally denounced and condemned the attack; yet, they didn’t provide details. Israel was silent. The Venezuelan network denounced the UN Secretary General for not condemning the attack on Syrian sovereignty. At this stage, they stopped providing specific details. Apparently even they felt that something was wrong with the report. I kept waiting; the issue was unlikely to be kept secret for much longer. Following Hebrew media protocols, the issue was clarified on Saturday (Feb. 2) by citing foreign media.
A Syrian army convoy transferring Russian SA17 rockets to Lebanon, was hit while at the Jamraya Research Center of the Syrian Army, which is located between Damascus and Lebanon, eight kilometers from the border. Both stories were true, and related to the same event, though they were both partial reports.After this was revealed, the event became of little interest due to the delay; maybe this was the aim of the early informational mayhem.
I was about to dismiss the entire affair, when in the early hours of February 3, Israel’s Minister of Defense Ehud Barak said during the meeting of European Defense Ministers in Munich, “what happened in Syria is a proof that we mean what we say.” He added “advanced weapons should not reach Lebanon.” In other words, he took responsibility for the attack. Despite the time that has passed since the attack, the reports from Syria show a Bashar al-Assad who is calm and unlikely to order a retaliation on Israel anytime soon. He looked so calm that I relaxed and remembered similar events from the near past.

Jamraya by Israeli YNET | and by Iranian TV

During many years, the Syrian-Israeli border was the quietest border of Israel. This was disturbed recently by two violent events. On June 5, 2011, was commemorated Naksa Day, on the 44th anniversary of the 1967 Six-Day War. The events included demonstrations on the Syrian side of the Golan Heights, mainly near the destroyed city of Quneitra and near the Druze village of Majdal Shams.
The events deteriorated when IDF soldiers opened fire on civilian protesters that were legally on the Syrian side; Israeli media published pictures of the firing soldiers. Syria claims that 23 people were killed in the rally; official Syrian news agency SANA quoted Health Minister Wael al-Halki as saying the death toll included a woman and a child, adding that another 350 people suffered gunshot wounds. UN chief Ban Ki-moon said that live Israeli fire had caused casualties and UN monitors were seeking to confirm facts. The IDF said that since all the casualties were on the Syrian side of the border it was unable to provide an exact count (see Casus Belli). Syria protested but made nothing; quite strange for countries formally in war.
The second event was no less strange. On November 11, 2012, the headlines of the Hebrew media were dramatic: “IDF fires at Syria for the first time since 1973.” For the first time since the Yom Kippur War, the IDF’s Artillery Corps fired a missile at a Syrian mortar post in response to the firing of a 120mm mortar shell shortly before (see Israel-Syria Shooting Exposes Hidden War). Again, the sides separated as friends. After a few days of hysteric headlines, everything looked fine. In fact, since 1973, the Israeli and Syrian regimes have kept an industrial silence. They use each other to frighten their populations into obedience while silently cooperating between them.
“If that were true, then why the recent Israeli attack took place?”
Syria is neither Libya nor Mali. It is not a desert country that can be conquered by NATO overnight. Western generals won’t be able to claim that they have defended the democratic will of the Syrian people. Two years after the Syrian Civil War started, Assad still runs the country. The rebels made remarkably little territorial gains; those were limited mainly to areas next to the Turkish and Iraqi borders. In the beginning of 2013, several reports on the rebels violence flooded the media with pictures that left no room for imagination: they are neither democratic nor Syrian. They are rapidly losing the population’s support in the areas that they have conquered, though they are still fighting.
What are friends for if not for offering unconditional help in tough times? For the umpteenth-time since 1973, Israel and Syria found themselves playing on the same side. Netanyahu desperately needs an invincible enemy to hide the social protests that forced him to call for early elections. Assad needs a coup de grâce, a death blow on the rebels.
“It’s a breeze,” said Barak while eating a piece of cake, “don’t worry, I’ll fix that before leaving office.” Both Netanyahu and Assad won. Netanyahu can claim to have hit a convoy of deadly weapons in their way to Hezbollah. Assad will claim that the rebels are working for Israel, and thus have no legitimacy. Barak will retire at the moment the next government is formed and is probably ready to be hit by any political ricochet of this event. “LeHayim,” Netanyahu toasted. “Sorry, I don’t drink,” Assad answered.