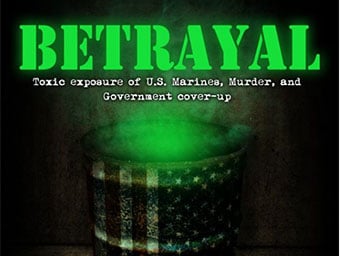 True story of U.S. Marines who were exposed to carcinogens, injured, and continue for fight for health care and compensation written by two Marine veterans.

(IRVINE, CA and JACKSONVILLE, NC)  – The connection is not a square peg in a square hole, but its damn close. Marine Corps leadership were involved in murder, crime scene cover-up, narcotrafficking (cocaine, the drug of choice), the shredding of records, and the denial of injuries from exposure to deadly contaminants at both El Toro and Camp Lejeune.

You don’t have to believe in conspiracies to understand the threat to freedom of a small but powerful group of people in and outside of government subverting the Constitution, effectively executing a coup d’état. Not in the United States, this is a free country, you must be paranoid, we’re the good guys, you say.It is not hyperbole to say that thousands of Americans have fought and died for the right to remain free. Life was too often short for those who served and died to preserve our freedom to ignore the threats of a ‘shadow government.’

Marine Colonel Jim Sabow placed his television on mute, arose from his easy chair, and left his house on Fifth Street at Marine Corps Air Station El Toro through the patio door.  He walked the length of the patio, called the dogs, which were in the back yard and enclosed them in the garage. This was a practice he routinely followed when visitors were expected.  Whether he opened the front door to greet his visitors or went out the back door onto his patio is not known, but we do know that he had only moments to live.

Colonel Sabow, decorated Vietnam fighter with 221 combat missions, met his death at the hands of others.  The unexpected blow to the right side of the head was violent, resulting in unconsciousness.  Occipital skull fragments penetrated into the back of his brain. He was near death due to the massive brainstem trauma in which agonal hyperventilation characteristic of this type of injury occurs. Sabow was aspirating blood from a wound in his pharynx that resulted from a basilar skull fracture. In fact, the tracheae, bronchi, bronchioles and alveoli were filled with blood, doubling the weight of the right lung.  His shotgun was found under his body.  No fingerprints on the shotgun.  No suicide note. There was no mention of the tramline bruise, an indicator of the violent blow to his head, in the autopsy report or the crime scene tampering by three men who flashed government credentials, forcing Naval Investigative Service (NIS) agents to leave the crime scene.

The motive for the murder was to prevent the disclosure of a covert operation to ferry weapons to Central and South America and government sanctioned narcotrafficing on flights into El Toro.  Data processing records were purged on the maintenance of unmarked C-130s; a Marine with knowledge to purge the records unexpectedly promoted, transferred and murdered several years later.  Other Marines who knew of the illegal drugs would meet violent deaths.

In 1985, the same year that trichloroethylene (TCE) was found in several agricultural wells off of El Toro, Camp Lejeune on the East Coast was forced to close down wells contaminated with TCE, PCE benzene, and other toxic chemicals.  As many as 750,000 veterans and their dependents were exposed to Lejeune’s contaminated wells over 30 years (1953-1987).

Congressional hearings and the testimonies of Lejeune veterans and dependents pressured Congress to pass health care for 15 medical conditions but without any provision for VA disability compensation.  Like their El Toro brothers, Lejeune Marines are forced to file disability claims with the VA.  VA claims must be supported by medical nexus opinions, linking the current medical condition to the base well water.  Medical doctors unfamiliar with epidemiology and not the trusting government are naturally hesitant of writing nexus opinions.  The fastest way to a VA denial is to file a disability claim without a medical nexus opinion.  The denial rate of Lejeune VA disability claims is over 84%. Lejeune Marine veterans now sick with cancers and unemployed are left to their own resources to pay the mortgage and put food on the table.

At El Toro, once the premier Marine Corps Air Station, no determination could be made by the government on the impact of toxic chemicals and their health effects.  Too much documentation was missing, but the evidence of toxic exposure was everywhere. You didn’t have to look too hard for it.

At El Toro, fifty-five gallon drums of trichloroethylene (TCE) waste were buried on the base for years to hid them from the Marine Corps Inspector General, base wells sealed in concrete without a well screen inspection; all original well construction drawing are missing; over 40 years of water distribution engineering drawings are missing; the entire set of water distribution drawings redrawn in 1986, the year after TCE was found in agricultural wells downgradient and during the period when Camp Lejeune’s wells were found contaminated with TCE; an El Toro Marine dead from Agent Orange exposure who never served in Vietnam; the dead Marine transported empty 55 gallon drums to the base’s landfills; other Marines  reported they used Agent Orange to spray the fence line to kill vegetation growth; a 200,000 square foot hangar, the former site of a Radium 226 paint room,  shuttered and sealed in 2012 while the State of California required the Navy to redo a radiation survey; the waste water pipes under the former Ra 226 paint room were cut; the half-life of Ra 226 is 1,601 years so if the sewer lines are contaminated with radiation, the cost of digging up the lies and disposal at a hazardous waste site could easily run into hundreds of millions; despite denials by the Navy and EPA, the initial purchase of softened municipal water in 1951 was not enough water to meet the demand for water for both El Toro and the nearby Santa Ana Air Facility, but enough to blend with the hardened well water to reduce corrosion in the El Toro’s water distribution system; subsequent to the purchase, several engineering drawings show the base wells (in the direct path of the TCE plume) as part of El Toro’s water distribution system; none of the wells were marked as abandoned; El Toro’s hand written pumping records stop as of December 1950, over six months before any municipal water was purchased; El Toro denied ownership of the TCE plume spreading into Orange County’s aquifer until a lawsuit forced them to accept responsibility for remediation; after closure in 1999, nearly 1,000 acres of the base were transferred to the FAA who subsequently transferred the acreage to the FBI with the promise of a wildlife corridor vanishing in the wind; ammunition bunkers were located in the transferred acreage in the base’s panhandle. Was this the site where Dr. Chuck Bennett found weapons grade U-238?

The facts are that Marine veterans, dependents, and civilian workers were exposed to toxic chemicals at both Marine Corps Air Station El Toro and Camp Lejeune.  The routes of exposure through ingestion in the water wells are clearly documented at Camp Lejeune and hidden in a fog of missing documentation at El Toro, but nevertheless present. Marines at both bases worked with TCE and other toxic chemicals without protective clothing and face masks. Many have died without ‘connecting the dots’ to military service.  Semper Fidelis, the Marine Corps’ motto, was seriously tarnished by the Corps’ refusal to support Marine veterans and their dependents exposed to toxic chemicals; many of them sick with deadly cancers, including over 80 Lejeune male Marines with male breast cancer.  The murder of Colonel Sabow at El Toro involves a cover-up that continues to this day, including an NCIS cold case investigation bungled in 2010 and a ‘doctored autopsy’ photo made to hide the huge swelling on the right side of Colonel Sabow’s head and upper neck from the force of a violent external blow to the head.

BETRAYAL, written by two former El Toro Marines, Robert O’Dowd and Tim King, photo/journalist, war correspondent, and Executive News Editor of Salem-News.com.  O’Dowd, a retired Defense Department financial manager, honed his investigative skills as an auditor for EPA Inspector General; King, a Los Angeles native, spent the winter of 2006/07 covering the war in Afghanistan, while he was in Iraq over the summer of 2008, reporting from the war while embedded with both the U.S. Army and the Marines. King holds numerous awards for reporting, photography, writing and editing, including the Oregon AP Award for Spot News Photographer of the Year (2004), first place Electronic Media Award in Spot News, Las Vegas, (1998), Oregon AP Cooperation Award (1991).  King has several years of experience in network affiliate news TV stations, having worked as a reporter and photographer at NBC, ABC and FOX stations in Arizona, Nevada and Oregon.

As part of the effort to self-publish and market a soft cover copy of BETRAYAL (over 500 pages), O’Dowd and King launched a fund raising effort this month on Amazon’s Kickstarter.  Donations as little as $1 can help raise the necessary funds to print an initial 500 copies of the book and fund the costs of marketing. The plan is to publish a print on demand book with Create Space.

Look for the video on BETRAYAL at http://www.kickstarter.com/projects/723278964/betrayal-toxic-exposure-of-us-marines-murder-and-c.