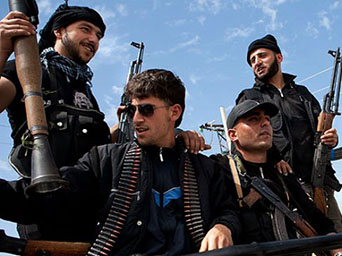 One thing for sure, the “secularist/nationalists” and the “salafi/islamist” in Egypt and in Tunisia all conspired willingly or unwillingly to abort the “Arab Spring” or what is left of it. Both are unfit to lead let alone govern.

I am sure the hundreds of thousands of young and old, rich and poor, ideologically free who went to the streets and took down the regimes of Bin Ali and Hosni Mubarak and Muamar Qaddafi, little did they know their hard work is hijacked by “leaders” and “followers” that best can be described unfit to lead and unqualified to govern and take the countries forward, rebuilding nations people and infrastructures destroyed by decades of corruptions, police state and failing institutions.

These “secularist/nationalists” and “salafi/islamists”, and the likes of Daniel Pipes and that other pseudo intellectuals like the creep Bernard Henry Levy should know they did not bring about the Arab Spring, in fact they have nothing to do with it all.

The Arab Spring was born out of the people desire to be free, to have a quality, decent respectable life, free from fear of the knock on the door in the middle of the night, free from fear to go to jail sentenced by a judicial systems at best corrupt, unjust and at the pecking of the president, the ruling party and intelligence service. A decent house and a decent job, a future for their families and a place under the sun.

The thousands who died did not die waiting for creeps and veggie-intellectuals the likes of Bernard Levy or Daniel Pipes to bring about democracy and good governance to the Arab countries. Not Arabs, not Americans, not Europeans want or desire a democracy seeded in Zionist ideologies and corrupting financial and political systems that are destroying societies and nations from within. What an insult for the hundreds of millions of Arabs to have these two Zionists think they are the “intellect” behind the Arab Spring.

The thousands who died and went to jail did not wait for the “secularist/nationalists” whose failures, in fact whose support for dictatorial regimes in Iraq, Libya, Syria, Yemen brought about failing states and kelpto-dictatorship. While the Brothers went to jail, Egyptians so called “intellectuals” were heading almost all government institutions from radio and TV to national newspapers, national publications and were spreading the lies that kept Mubarak regime going for decades.

The thousands who died and the millions who took to the streets in defiance of the police and bullets did not go out so that “salafi/islamists” can go out and take the laws in their hands and determine who is a pious righteous citizen and form a nation in their own ugly dark vision.

The young and the brave Egyptians did not bring down the regime so that Egypt can be ruled by “fatwa’s” from many unfit, unlearned if not misfits who are sawing the seeds of anarchy and sectarianism. The young revolutionaries did not bring down regimes to have the state substitute one ‘secular corrupt police” with a “ religious virtue police” whose interests and understanding of the state and people does not go beyond “sex and booze”.

The biggest danger facing “Arab Spring” and citizens of states like Libya, Tunisia, Egypt, Yemen, Iraq, certainly Syria is not American imperialism but Sunni Salafi terrorists whom in the case of Syria are the biggest danger and threat to the Syrian revolution and uprising and its chance of bring down Bashar and his criminal regime.

Al-Nusra and Alqaeda never contributed any good to the renaissance of the Arab or Muslim states and their agenda if any thing is questionable funded by certain evil forces from within the Muslim world Zionist related mafia, and from drug money generated in the opium fields of “Mujahideen and Taliban” and the cocaine trafficking in Sub-Sahara and separatists forces operating within Algeria, Mali and the Sahara.

Too bad for the citizens of these states, whether Arabs, Berber, Kurds, Muslims, Christians and Jews, religious and secular the “salafi” terrorists movements are the biggest threat to what we know today as Tunisia, Libya, Yemen, Syria, Iraq. These “salafi” terrorists are sowing the seeds of hate and ‘sectarian’ strife in Syria, Lebanon, Egypt and Iraq and are committing terrorists and murderous acts whose victims are innocent people. And in Libya they are the one standing in the way or rebuilding the nation.

Not so sure if these ‘salafis” in Tunisia, or Egypt, or Iraq or Libya or Syria ever contributed money or efforts to building a school, a clinic, perhaps a bakery or social clinics let alone a factory to employ people or sport centers or rehabilitation clinic or vocational schools or a library or a science museum. The only thing they are capable of doing is killing and committing cold blood murders of innocent people and destroying nations with the hope of bringing about a retarded backward “jahylia/ ignorance” Islamic state

One has to always questions how do these “salafi terrorists” get their funding to buy arms and weapons to attack and kill and destroy and to travel the “jihad route”.

These “Islamist terrorists” with their acts and vengeance and their ugly dark vision of an “Islamist” state shares common interests with America’s imperialism and Israeli Zionism in their conspiracy to abort the Arab Spring.

Let all these Islamist Jihadist and terrorists go back to their home countries and let the Syrian people fight for their future. If America and Israel succeeded in one thing, they did succeed in nourishing and nurturing “Islamic terrorism” starting with the Mujahideen in Afghanistan, the source of all evil and terrorism in the Muslim world. I am sure the Arab and Muslim world would be much better off if the Mujahideens and Taliban’s were defeated by the Soviets.