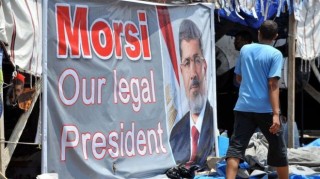 In his latest post from Egypt, Robert Fisk – the best mainstream Mideast journalist working in English – points out that filthy-rich Egyptians are the backbone of support for the anti-Morsi fascist coup, while poor Egyptians oppose the coup and support Morsi. It’s like Pinochet-vs.-Allende all over again.

Fisk ought to have gone further and explained an ugly little secret about Egyptian society: Even more than in most places, wealth in Egypt is almost entirely ill-gotten. Due to Egypt’s colonialist legacy of statism and endemic corruption, Egyptians who work honestly for their livings have little opportunity to make money. Compradors, parasites, criminals, and military thugs in jackboots grab all the resources – including billions of dollars in US enslavement-money.

Those who work productively are poor.

All their BS about ideology, all of their honey-tongued islamophobia, blah blah blah, is just that – BS.

If the Brotherhood has its way, the whole Egyptian comprador criminal elite will lose its privileges and have to work for a living.

Poor Egyptians – the majority of the country – know this. That’s why they support the Muslim Brotherhood. That’s why they elected a Brotherhood parliament in a massive landslide, and elected their man Morsi to the presidency despite the massively-financed dirty tricks of the corruption-based deep state.

What we are seeing now is a filthy fascist coup, driven by the rich, corrupt scumbags who own and run Egypt without having done an honest day’s work in their lives. And they are getting ready to perpetrate massacres – holocausts even – to hold on to power.

Robert Fisk on Egypt: As impoverished crowds gather in support of Mohamed Morsi, the well-heeled march behind their images of the General  Hundreds of thousands support the coup – just as many do not.

And the future for Egypt is looking increasingly bloody. Robert Fisk reports from Cairo

Hundreds of thousands of people turned out outside Cairo’s Rabaa mosque yesterday to protest against the coup d’état in Egypt, while hundreds of thousands poured into Tahrir Square to support their favourite general, Abdel Fattah el-Sisi, who staged the coup-that-we-mustn’t-call-a-coup.

Grotesque, unprecedented, bizarre. Call it what you like. But the helicopters swooping happily over Tahrir, and the line of visor-wearing riot police and troops standing opposite the Muslim Brotherhood’s barricades, told their own story. Journalists should not be merchants of gloom, but things did not look too good in Cairo last night.

The saddest thing – the most tragic, if you like – was that the crowds in Nasr City, close to the airport road where the mosque stands, were as cheerful and welcoming as the masses in Tahrir who regard their opposite numbers as “terrorists” rather than supporters of Mohamed Morsi, the legally and democratically elected President of Egypt who was overthrown by the army three weeks ago. The tens of thousands of Egyptians crossing the Nile River bridges or sweating in the 40C heat on the highway to the airport were so happy they could have been heading for a football match.

But there the jollity ends. The Muslim Brotherhood men and women carried Morsi’s picture and had painted Stars of David on the military barracks near the mosque. The Brotherhood had piled thousands of sandbags around their tent encampment and piles of stones to hurl at anyone trying to move them. But the soldiers down the road – also, it has to be said, cheerful and quite friendly – were holding automatic weapons beside French and American-made armoured vehicles, and they also held wooden batons and were flanked by policemen in shoddy black uniforms.

It looked as if they were only a few hours away from moving in on the Brotherhood, and no matter how many bearded men were reading the Koran on the roadway – and they were quite literally doing that – it was difficult to imagine the coming hours being anything but deadly.

One point that stood out – and it may be unfashionable to say so – is that the Brotherhood supporters were generally poor and looked poor in their grubby abayas and plastic sandals. Some of the Tahrir demonstrators, who were truly revolutionaries against Mubarak in 2011, trooped over the Nile bridges waving posters of General al-Sisi. And one has to say, painful as it is to do so, that the sight of well-heeled people holding aloft the photograph of a general in sunglasses – albeit a wonderful and very democratic general – was profoundly depressing. What really happened to the 25 January 2011 revolution?

“We love the soldiers but we don’t need the general,” a scarved woman shouted near the Rabaa mosque, but Sisi is now a well-known face, the man who will return Egypt to its true revolutionary path, if you can forget for the time being that the first genuinely elected president in modern Egyptian history is probably incarcerated in one of those barracks we drive by so blithely on the way to the airport.

But Egypt does need a government. Driving back from Nasr City to central Cairo tonight, my car was blocked in a traffic jam because rival families were fighting a gun battle across the highway. About 1,000 Cairenes had joined in by throwing stones from an overpass. Two miles further on, a middle-aged woman was driven down by a motorcycle and lay on the road in great pain. Many of the drivers who saw her carried on their journeys, the noses of their families pressed to the window as this lady lay spread-eagled on the highway in her black dress. The near future does not look good.