TV Professor Michael Shermer “Disgraces the Academy” with His Ridiculous Self-Promotion as a “Conspiracy Theory Detector.” 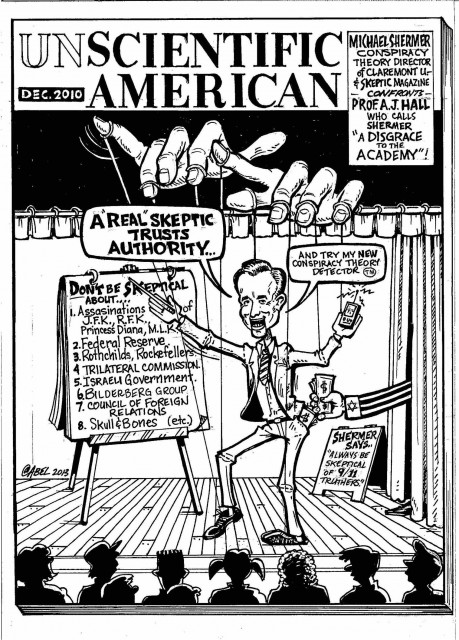 This  original cartoon by Abel emerges from one of Michael Shermer’s regular columns in Scientific American. Dr. Shermer, founder of Skeptic Magazine, spoke in the autumn of 2010 at my home University where he gave a version of his canned lecture, “Why People Believe Weird Things.” The University of Lethbridge advertised Dr. Shermer as “Adjunct Professor of Economics at Claremont Graduate University.” Claremont is the home school of Professor David Ray Griffin. With his ten erudite books on various aspects of 9/11, Prof. Griffin is widely acknowledged as the Dean of 9/11 Studies.

After his really shoddy presentation I accused Dr. Shermer in the Q and A session of being gullible rather than skeptical on many contested topics. I asked Dr. Shermer pointedly about his views on the work of his Claremont colleague, Prof. Griffin. Rather than answer me forthrightly, Dr. Shermer shot back a rhetorical question in an intimidating and mocking manner.  He shot back, “Well then who did 9/11?” This question was an obvious trap. I responded by indicating that when one telephones the police to report a murder one isn’t expected to declare who did it. Then I went on to indicate publicly that Michael Shermer is “a disgrace to the academy.” I didn’t at that moment understand how tenuous were Shermer’s actual connections to Claremont Graduate University.

Michael Shermer made the University-of-Lethbridge-episode the basis of his column in the December 2010 issue of Scientific American. He entitled the piece “The Conspiracy Theory Detector.” Shermer described his encounter with me, referring as well to the You Tubes of the incident subsequently posted by my then-graduate student, Joshua Blakeney. Instead of accurately quoting my core comment that he had demonstrated himself to be “a disgrace to the academy,” Shermer disingenuously misquoted me as accusing him of being “a disgrace to the economy.”  http://www.scientificamerican.com/article.cfm?id=the-conspiracy-theory-director

Shermer went on to lay out his 10 point formula for the detection of “conspiracy theories.” Among the topics Shermer ridiculed as the subject of “false conspiracy theories” were the following: “Who really killed JFK, RFK, MLK, Jimmy Hoffa and Princess Diana, along with the nefarious goings on of the Federal Reserve, the New World Order, the Trilateral Commission, the Council on Foreign Relation, Yale University’s secret society Skull and Bones, the Knights Templar, the Freemasons, the Illuminati, the Bilderberg Group, the Rothschilds, the Rockefellers, and the Learned Elders of Zion.”

In the weeks before the Scientific American essay appeared I did my own research into Shermer’s credentials. I explored the website of Claremont Graduate University and discovered to my surprise that there was no reference to Shermer whatsoever on a list of Adjunct Professors of Economics. I then wrote to Prof. Jean Schrodel, Dean of Claremont’s School of Politics and Economics, and received the answer that she had never even heard of Michael Shermer. The acting President of Claremont also answered me writing Dr. Shermer “does not hold any term or permanent appointment in the University.” The Claremont president added, “Michael Shermer assists Prof. Paul Zak of the Economics Department in an occasional single course in the transdisciplinary studies program at the University.” Shortly thereafter the term “of Economics” disappeared from Shermer’s Wikipedia biography and his own website.

Shermer’s misrepresentation of the nature of his relationship with Claremont Graduate University and his failure to quote me accurately in accusing him of being a “disgrace to the academy” justify my characterization of him as a “credential inflator and disnfo agent.” In my initial letter to Claremont’s Dean Schrodel I characterized as follows my impression of Shermer’s presentation at the University of Lethbridge, who officers, sad to say, replicated the false advertisement of the very un-skeptical poseur as Adjunct Professor of Economics at Claremont Graduate University:

I must say, (Shermer’s) illustrated talk seemed to me to be far below even the minimal standards for a university presentation. His approach was professionally and ethically substandard. Dr. Shermer seems to specialize in efforts to demean colleagues through tactics of guilt by association. He equates, for instance, those who study the historical record of what did or did not happen on 9/11 with Holocaust Deniers and with those who study supposed aliens from outer space. He groups all the targets of his smear job together without distinguishing them as individuals with various specialties, disciplines, orientations, and theories. With his dehumanizing hate speech and psychobabble he seeks to arouse the antagonism of his audience towards a generic category he identifies as “conspiracy theorists.”

In the question and answer session I asked Dr. Shermer about his view of the work of Dr. David Ray Griffin, Professor Emeritus of the Philosophy of Religion and Theology at Claremont Graduate University. Dr. Shermer claimed to have read all of Dr. Griffin’s books on 9/11 and found them to be entirely without merit. Thus, the distinguished Claremont Professor Emeritus, Dr. David Ray Griffin, was lumped together by another Claremont professor (??) into a general pool of Holocaust Deniers and such. All of this was quite shocking to me and I said so publicly. I was therefore relieved to find that Dr. Shermer may not be associated with your well regarded school [Claremont Graduate University] in the way he claims.

I would appreciate an explanation.

In his correspondence to Joshua Blakeney and I, Michael Shermer made a point of denying an accusation we did not make. Shermer claimed he was not a CIA disinfo agent. While Dr. Shermer is not a real professor he frequently plays one on TV appearing, for instance, on the Colbert Report, Dateline, Charlie Rose, Larry King, TED, Oprah, CBC, and A and E. Shermer’s constant torquing of the term “conspiracy theorist” to discredit virtually all interpretations that are analytically skeptical of power’s top-down workings form part of a larger psychological operation whose basic structure is becoming more and more obvious. Jonathan Kay, Daniel Pipes, and David Aaronovitch are also important operatives instrumental in perpetrating this core psy op of the Global War on Terror. A key to their work is a slavish defense of Israeli foreign policy and the repetition of a string of associations equating all so-called “conspiracy theories,” but especially those involving 9/11, with “Holocaust Denial” and “Antisemitism.”