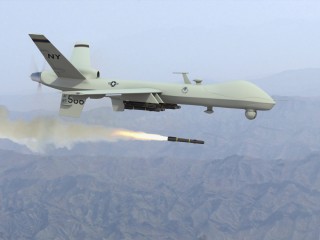 The Global War on Terror (GWOT) tactics of targeted assassinations, kill lists, signature strikes, violations of national sovereignty, and heart wrenching photos of dead and mutilated women and children (non combatants), many in nations not at war with the United States, have motivated widespread activism demanding that Unmanned Aerial Vehicles (UAVs) or what are commonly referred to as Drones must be banned as immoral and illegal weapons.

The UAV or drone was initially developed as a surveillance platform with limited weapons capabilities (the MQ-1B “Predator”). As its effectiveness to seek out and destroy “targets” became apparent, it quickly evolved into a hunter/killer UAV with surveillance capabilities (MQ-9 “Reaper”). Deserving or not, drones have become symbolic of the Global War on Terror.

To be precise, and this is important, even the Reaper drone is not a weapon, but a weapon’s platform for 16 Hellfire missiles or a mixture of various ordnance types, in much the same way that submarines and naval surface vessels are weapons’ platforms for Cruise/Tomahawk missiles.

Do Drones Cross a Moral Line?

I am idealist enough to admire pacifism but enough of a realist to believe that war may (at least theoretically) be necessary, unavoidable, just, and moral. I recognize as well, and regret, the brutality that war entails but begrudgingly accept that in a just and moral war (one in which Just War Theory’s (JWT’s) jus ad bellum criteria have been satisfied and International Law adhered to), the use of weaponry to destroy property and to kill and injure liable human beings (combatants) can be just and moral as well (again if and only if the JWT’s jus in bello criteria are satisfied and International Law adhered to).  In this article, I will consider whether the military use of drones on the battlefield can satisfy these necessary moral and International Laws of war.

The Criterion of Discrimination (COD) – identifying and affording of immunity to noncombatants – is critical to determining the morality and legality of any action and any weapon in war. Given its sophisticated optics and surveillance capability, drone “pilots” can clearly and accurately identify objects only inches wide from over 15,000 feet. Further, drone pilots have the capability to follow and study in great detail the actions, patterns of behavior, etc., of prospective targets for long periods of time before initiating a strike. Consequently, drone pilots can make determinations of liability; discriminate between combatants and innocents even more effectively and accurately than a pilot of a manned aircraft, or a weapons specialist aboard a submarine or naval surface vessel. Thus, given its sophisticated discriminatory capability, the careful use of UAVs both satisfies the COD and lessens the likelihood of collateral damage.

Also of moral and legal concern is the drone’s primary ordnance, the Hellfire missile, a Depleted Uranium (DU) weapon. While the use of DU is certainly questionable (in my view illegal and immoral), its use is not unique to UAVs. Tragically DU is common in ammunition and ordnance fired from a whole range of weapons and weapons platforms, including the Air Force’s A-10 Thunderbolt, the Marine Corps’ AV-8B Harrier, the Army’s Bradley Fighting Vehicle, the AH-1 Cobra helicopter gunship, etc. What is problematic, therefore, and should subsequently be banned as illegal and immoral is not UAVs, or tanks, or helicopters, etc., but Depleted Uranium as it violates the basic rules and principles of a whole range of International Humanitarian Law regarding “appropriate” weaponry. 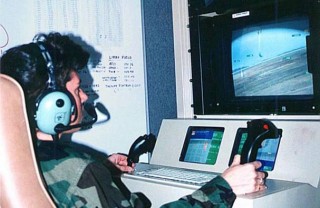 Another, perhaps more conceptual, concern regarding the use of UAVs is that drone pilots fire their weapons in total safety thousands of miles from the field of battle. Not only does this strike one as unfair, some have argued that it fundamentally alters the nature of combat, rendering a resort to war easier and more likely.

Though perhaps regrettable, an expectation of fairness in the conduct of war is unrealistic and a consequence of a pervasive and insidious mythology intended to make war palatable, even romantic. War is neither fair nor noble, or has ceased to be centuries ago when armies abandoned the scarlet tunic in behalf of camouflage, the standing exposed linear war fighting tactic in favor of ambushes and sniping, and face to face, hand to hand combat in favor of long range and indirect weaponry.

Secondly, if what renders drones immoral and illegal is the safety of the drone pilot launching his Hellfire Missiles at great distances from the battlefield, then the same moral and legal criticism is warranted of the naval weapons specialist launching her Tomahawk Cruise missiles from submarines and surface vessels at distances of up to 1500 nautical miles.

Third, there is no moral or legal requirement for equal jeopardy on the battlefield. The United States spends many billions of dollars on weaponry, more than the next 10 nations combined, including Russia, China, Iran, etc., to ensure its war fighting advantage and to lessen the vulnerability of its soldiers. The fact that, due to technologically sophisticated weaponry, wars may seem one-sided (unfair) and battles waged with little or no risk to one group of belligerents, does not, in and of itself, violate the laws of war. Asymmetrical warfare may be just and moral.

Fourth, “altering” the nature of combat due to technological advances in weaponry is nothing new. Nor is it unique to UAVs. It began with David’s slingshot in his biblical confrontation with Goliath and has progressed through the development of the spear, bow and arrow, musket, rifle, artillery, manned aircraft, etc. The drone is merely the latest expression of humankind’s “ingenuity” in developing even more effective means of killing fellow human beings.

Choosing war rather than diplomacy as a means of reconciling differences is a decision of conscience based not upon the availability of any particular weapons system, but upon the moral character and respect for law of our political leaders and citizenry. Recognizing the destructive capability of sophisticated high tech weaponry ought to make reasonable, moral, and law abiding policy makers and citizens less, not more likely, to choose or support war as an acceptable means of resolving differences.

Finally, whether drones antagonize and subsequently militarize non terrorists/non insurgents as some have claimed is not an issue of morality or legality but a practical determination of effective battlefield strategy and tactics.

I anticipate that this article will not be received well by some, perhaps many, of my compatriots in the peace and justice community. To see my arguments as dangerous, perhaps even as sanctioning the killing and destruction associated with the use of drones in Pakistan, Afghanistan, Yemen, Somalia, etc., is to miss the point. I have argued that drones, if employed responsibly and carefully by the military on the battlefield, can like manned aircraft, submarines, and surface vessels, satisfy JWT’s jus in bello criteria and comply with International Law. Consequently, anti-drone activism is misdirected motivated, in my view, by a profound sense of helplessness and frustration at being unable to effect change, to end perpetual war and the slaughter of innocents. I share this frustration and have argued elsewhere, that in the Global War on Terror, drones, as well as other weapons systems, have been and continue to be used irresponsibly and indiscriminately in violation of the moral and International Laws of war. This reality, however, does not entail the condemnation of drones but of those political and military leaders who make the tactical decisions. Perhaps, an apathetic and uniformed citizenry must bear responsibility and culpability as well.

By providing clarity and enhancing understanding of UAVs and of the moral and legal guidelines relevant to their use by the military in war, I hope to refocus the attention and outrage of activists to where it should be and to where it will do the most good – upon the war criminals who make the political and tactical decisions not to wage just war but to commit murder.

Until such time that humankind evolves sufficiently to recognize the horror and futility of war, we must realize that our struggle for peace and sanity is not about drones, or cruise missiles, or Seal Team Six. It’s about understanding that war is rule governed, and that these rules apply equally to all players, friend or foe. It’s about understanding that the tragic events of September 11, 2001, the development of new weapons technologies, and the arrogance and hypocrisy of American Exceptionalism do not absolve our political and military leaders of their obligation to abide by the moral and International laws of war, e.g., to not kill non combatants, not violate the political sovereignty or territorial integrity of other nations, etc. It’s about transparency, and most importantly, it’s about remaining vigilant and determined that ALL who violate these rules, whether by the use of drones or any other weapon or tactic, will be held accountable and prosecuted for their crimes against humanity.