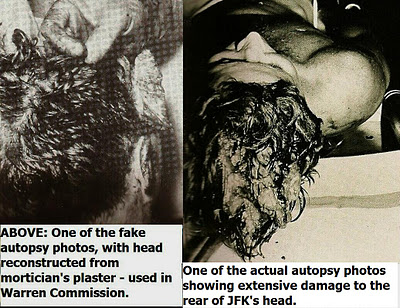 No Hallowe’en horror story could possibly match the macabre evil of the events of November 22nd, 1963.

When Paul Krassner published a cartoon showing LBJ committing an indecent act with the bullet holes in JFK’s head,* little did he know how close he was to the truth.

LBJ, we know now, was a psychopath who employed his own personal hit man. LBJ was the kind of guy who would expose himself or defecate in front of others to intimidate them. And LBJ, according to the handwritten and tape recorded confession by confessed CIA-employed JFK assassin Howard Hunt, was (alongside the CIA’s Cord Meyer) one of the two top organizers of the murder of President Kennedy.

But it wasn’t LBJ who committed indecent acts with JFK’s bullet holes. It was actually certain members of the US military top brass – including JFK’s arch-enemy Gen. Curtis LeMay – who did that.

David Lifton’s book Best Evidence exposed the shocking truth back in 1981: Prior to the official autopsy at Bethesda Naval Hospital, JFK’s body was kidnapped and mutilated by top-ranking officers. His brain was scooped out and stolen. His bullet holes were butchered and enlarged.

The purpose of the ghoulish desecration of the President’s body: Obscure the fact that he had obviously been shot from the front.

Actually, JFK’s body was kidnapped twice. The first time was in Dallas, when the Secret Service drew their guns on the Dallas Police and stole JFK’s corpse from its lawful custodians.

The second postmortem kidnapping apparently happened after Air Force One landed near Bethesda Naval Hospital. JFK’s body was snatched and rushed to Bethesda in a plain metal casket, wrapped in a body bag. There it was covertly butchered under the supervision of LeMay and other high officers.

The grieving throngs who had come out to pay their last respects to America’s greatest president had been saluting an empty casket.

Folks, if you can put up with this, you’re an interesting species of subhuman slime. If you would rather live like a coward, rather than stand up and die defending your country from these monsters, your life isn’t worth anything anyway.

Listen to my interview with Dr. William Warrick about JFK’s faked autopsy at: http://noliesradio.org/archives/71084