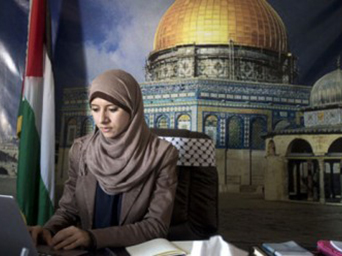 And is new spokesperson Isra on a ‘mission impossible’?

I wish 23 year-old Isra al Modallal all the luck in the world in her new and important job as the media face of Hamas – important, that is, if Hamas allows it to be. It’s a courageous move on her part… and a curious innovation by Hamas.

Some reports say Isra is not even a member of Hamas and she’d be happy representing bitter rival Fatah and the Palestinian Authority as well. If she plans to freelance like that, I wouldn’t mind betting it will end in tears.

I hear Isra was at college in Bradford, England. Bradford is in the county of Yorkshire, an area whose people are noted for blunt speaking and no nonsense, laced with a dry humour all of their own. If she brings some of these qualities to Gaza it will stand her, and Hamas, in good stead.

So how do we contact this bright young lady? Or will she reach out to the ‘alternative’ media? Will those who are interested be placed on her database and regularly briefed? Is she even aware of online publications like the ones that carry this article? Does she know of their long-time, unflagging support for the Palestinian cause?

Hamas and Fatah have never given a toss for the toils of the alternative media on their behalf. We expect ignorance from the quislings but not from genuine patriots. Hamas is obstinately insular, obstructive and unapproachable, so writers like me are frankly fed up with them.

But according the The Guardian the Hamas government “began a public transformation six months ago with the new head of media, Ihab Ghussein”, who among other things “orchestrated a new government website”.

Has anyone over here noticed a transformation?  The English version of Hamas’s website http://www.hamasinfo.net/en/  was still “under construction” when I checked and is therefore useless to us. Furthermore, I don’t think anyone among the writers I know has ever heard of Mr Ghussein let alone received a press release from his office. We simply don’t exist as far as he and his bosses are concerned. So Isra’s appointment needs to be accompanied by a top-down change of attitude in the regime, a genuine opening-up and a real mood for co-operation with all media, not just the corrupted mainstream.

“When I opened the map, there was no Palestine…”

Every Palestinian I’ve met during my visits has pleaded with me to “tell their story”, and this I’ve been trying to do for the last 7 years. Hamas and the Fatah-dominated Palestinian Authority don’t bother. They not only neglect to tell the world, they fail to brief us so that we can tell it.

The Palestinian embassy in London refused to help when I was writing my book ‘Radio Free Palestine’. And when I criticised their lackadaisical attitude, defunct website and dysfunctional media department, and called for the ambassador to pack his bags and go home, I was branded ‘an enemy of Palestine’. Today they have refurbished the website but its content is unhelpful. The embassy is well staffed with policial, media, cultural, civil society and economic departments. What they do all day is a mystery.

I shall never forgive them for failing to publicise the triumph of the Gaza college students who in 2011 came over here to Silverstone, the home of motor racing, with their racing car made of  bits salvaged from the scrapyard (because the Israelis’ illegal blockade wouldn’t allow new components to be imported) and took on the might of Europe’s technical universities in the annual ‘Formula Student’ contest. They did astonishingly well and earned much praise from the motor sport authorities – see http://mycatbirdseat.com/2012/06/littlewood-bring-gaza-race-car-students-in-from-the-cold/ and other sources .

The Director of Engineering at IMechE (the Institution of Mechanical Engineers), which runs the FS competition at Silverstone, said: “It really is inspirational to see a team working so hard with the odds stacked against them like this. Formula Student is a massive challenge in its own right, but to be working with almost entirely recycled parts in one of the most deprived areas in the world is remarkable. These students epitomise the spirit and inventiveness of those who take part in Formula Student.” This  achievement wasn’t considered worth broadcasting by the embassy layabouts. I didn’t hear about it until long afterwards, and even then the news didn’t come from the Palestinians’ media department.

When the Palestinian Olympic team arrived here last year, did the embassy invite us to meet and write about them? Hell no.

I still urge those skivers to leave the easy life of London and go home to the diminished, wretched existence they have so miserably failed to expose from their privileged platform here.

Isra is quoted as saying that, in her experience, few English people know about the Palestinian struggle or even where Palestine is. “Some of my school friends would say, where is Palestine on the map and when I opened the map, there was no Palestine, only Israel.”

The Fatah/PA position as collaborators with the Israeli occupation probably means that their paymasters demand silence. If they were to suddenly beam information at me I’d regard it with grave suspicion, even if fronted by a pretty face. But Hamas, hopefully, is under no such constraint. After their 2006 election victory they should have immediately re-invented themselves and seized the media initiative.  After delaying for seven and a half years they have a lot of ground to make up and may have left it too late.

That people in the West are becoming better informed about the evil occupation of the Holy Land is largely due to dedicated activists, campaign groups and online privateers… and no thanks whatsoever to the leadership in Palestine. I’m hoping Isra, with her degree in media, will inject some professionalism into what has been for too long a shambles that has let the Palestinian people down and robbed them of the future they deserved. With truth and so much more on their side they have nevertheless permitted the Israeli regime, with its hated brand image and monstrous lies, to run rings round them.

Will Hamas change its spots and rewrite its charter?

In 2007, just after Hamas had exercised its democratic authority and ousted bad losers Fatah from Gaza, I was fortunate to be in a small party that met Ismail Haniyeh, the Hamas prime minister. It was surprising, what with the blockade and the endless crises it caused, that he found space in his schedule and was so generous with his time. I had done a little research beforehand on Hamas’s ministers and found them to be impressively qualified in a  wide range of academic, technical and business skills. It struck me that they were probably better equipped to run a state apparatus (given a level playing field) than the front bench of the UK government.

We in the West just needs to know them better and warm to them a little.

But there will be no warming unless the alleged transformation involves the Hamas leopard changing some of its spots and, in particular, rewriting its charter. Otherwise they won’t make many friends or influence many people here in the West.

Nor will brave Isra. And that would be a pity. If the worst happens she should come back to the UK and launch an independent Palestinian media centre.

Postscript: ‘peace talks’ negotiators have finally had enough. Were Hamas right to warn against going there?

Just as I was signing off, it was announced that Palestinian negotiators Erekat and Shtayyeh, involved in the going-nowhere talks with Israel, have resigned. They say they came to the decision because of the “unprecedented escalation of colonization and oppression against Palestine and the Palestinian people by the State of Israel [for instance the 6,296 illegal settlement units  approved by the Israelis during the first three months of negotiation]; a lack of seriousness from the Israeli government about reaching a two-state solution; and the Israeli government’s failure to fulfill commitments undertaken before the resumption of direct negotiations on July 29th 2013.”

But why did they let themselves be suckered into this charade when everyone knew it was a ploy to buy time to create more irreversible ‘facts on the ground’ in order to make the occupation permanent? And why did it take this long for them to become disgusted enough to walk away?

The bulletin, from the PLO Negotiations Affairs Department and relayed by the embassy in London, says the resignations do not change the PLO’s commitment to continue negotiations until the end of the 9 month period agreed with Israel and the US, i.e. 29 April 2014.

It will be interesting to hear what Isra, on behalf of Hamas, says about it. Let’s see how both sides handle this great PR opportunity…

The gloves must surely come off. What possible excuse is left for not taking Israel to the International Criminal Court?