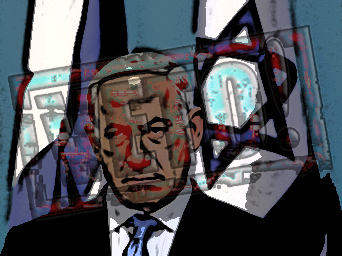 Israel, a terrorist, illegitimate state from day one, a constant threat to world peace, a nuclear power that is a threat to its safety and that of the world including the US is the last country that can talk about the rights of other countries to have nuclear technology even nuclear weapons. No one, not God, not the UN, certainly not the US or Europe endowed Israel with a “veto’ over war and peace in the world.

Israel, unlike Iran have been engaged in acts of terrorism and been in constant wars before, during and after its creation in 1948 and continues to day. Israel engaged in acts that are in the least could be and should be classified as “acts against humanity” from ethnic cleansing and exiling of Palestinians to “transfer of population” to destruction of villages, land theft, kidnapping, arrest and jailing without trial. Have engaged in assassinations in Paris, Iran, Syria, Jordan, Iraq, Egypt, Palestine, Dubai, Malta among many other places and yet it is not a “rogue state”.

While Israel was able to scuttle the first round of talks in mid November exercising its power and influence over France, it’s president François Hollande and its foreign minister Laurent Fabius. France decision perhaps is driven by the hope of reelection for Hollande is suffering badly in the poles, perhaps in seeking to consolidate its weapon sales programs and commercial business in the Middle East, perhaps to play a bigger role in Middle East affairs in “Sunni” countries.

Though Israel failed to exercise its “veto” over the temporary deal with Iran, Israel did not give up yet. Its dogs in Congress are pushing for bill that demands the administration certify to the Senate every 30 days that Iran is abiding by the terms of the temporary agreement and may, just may, succeed in forbidding, preventing, even hijacking the administration decision to move forward with a permanent agreement with Iran within the next six months.

Israel alone and through its allies, agents, loyalists and Israeli Firster’s within the US administration, certainly in Congress have failed to scuttle the negotiations, Bibi Netanyahu have not given up yet. Bibi and Israel wants to decapitate Iran and its nuclear program demanding Iran to give up completely its nuclear program even if it is a peaceful one. Bibi Netanyahu army of loyalists simply could scuttle the next deal.

Israel perhaps the third or fourth most powerful nuclear country after the US, and Russia perhaps China, was helped in its nuclear program by the hypocritical west with countries like the US, France and Norway supplying the material and the know how to Israel to produce hundreds of nuclear bombs and no thanks to countries like the US, Germany, and Russia have the means to deliver its bombs as far as New York, Moscow or Chicago, Tehran even Mecca.

Arabs Gulf countries which have suffered from and paid hundreds of billions in the costs of wars over the last three decades should be wise enough to understand that the best thing for them is cooperation with Iran not confrontation, certainly not inciting and giving legitimacy to Israel attack on Iran.

As I have stated in my last article it will be wise, even worthwhile for the Arab Gulf countries to form cooperation and partnership with Iran in its nuclear program guaranteeing the safety of the technology and making sure that Iran nuclear program is peaceful.

With so much investment in the hundreds of billions, made by these Arab Gulf countries in their infrastructure and in industries creating an oasis of prosperity and with trillions in reserves it would be foolish to support, incite or even engage in any war that can destroy years of hard work and building. Investment in peace pays off in the immediate and distant future. The last thing the Arab Gulf needs is another war.

Iran on the other hand must take the necessary steps to reach out to its neighbors in affirmation of peace and brotherhood and must also cease to have its allies incite “sectarian” hate that can only bring wars and destruction. The safety and security of Iran is with the safety and security of the Arab Gulf States. Both sides should give peace a chance, Inshallah.