(Salem, OR) – Enrique Kiki Camarena, a DEA agent and former Marine, was kidnapped, tortured and murdered in Mexico in February 1985. In October 2013, Luis Chaparro and J. Jesus Esquivel broke the news that Kiki was murdered on orders from the CIA.

The motive for the murder was to prevent him from blowing the whistle on narcotrafficking of cocaine into the US to fund the Contra War in Nicaragua, according to El Diario de Coahuila and Proceso, the two Mexican newspapers.

The story attracted media attention in South America, Europe, and on FOX in the US. Except for FOX, the US major media did not report the breaking news story. FOX producers of “The Kelly File” failed to report the most sensational and breaking news part of the Kiki Camarena news story—the involvement of the CIA in his torture and death.

“The Kelly File” on FOX reported an abridged video report “A look at DEA agent ‘Kiki’ Camarena’s murder.” William La Jeunesse reported the story on Megyn Kelly’s program but left out the involvement of the CIA in Kiki’s torture and murder. Apparently, FOX decided that reporting the connection to the CIA, the breaking news part of Kiki’s death reported by two Mexican newspapers and La Jeunnesse in a FOX news.com article was too hot to handle.

William La Jeunesse and Lee Ross, the two correspondents for FOX News.com, reported in an October 10th news story posted on the internet, “US intelligence assets in Mexico reportedly tied to murdered DEA agent” that Phil Jordan, former director of DEA’s El Paso Intelligence Center said, “In [Camarena’s] interrogation room, I was told by Mexican authorities, that CIA operatives were in there. Actually conducting the interrogation. Actually taping Kiki.”

The tapes of Kiki’s torture and murder were obtained by the DEA from the CIA, according to Hector Berrellez, his DEA supervisor who headed up the DEA’s investigation of the murder. Berrellez said, “Obviously, they [the CIA] were there. Or at least some of their contract workers were there.”

A story that sounds like it was taken from a complex espionage novel has just exploded on U.S. television. Enrique Kiki Camarena, the DEA law enforcement officer murdered in Mexico in February, 1985, was apparently not the victim of the Mexican capo Rafael Caro Quintero, but rather, of a dark member of the CIA. This individual was the one charged with silencing the anti-narcotics agent for one serious reason: he had discovered that Washington was associated with the drug trafficker and was using the profits from the drug trafficking to finance the activities of the counterrevolution.

According to Berrellez, “It was I who directed the investigation into the death of Camarena. During this investigation, we discovered that some members of a U.S. intelligence agency, who had infiltrated the DFS (the Mexican Federal Security Directorate), also participated in the kidnapping of Camarena. Two witnesses identified Felix Ismael Rodriguez. They (witnesses) were with the DFS and they told us that, in addition, he (Rodriguez) had identified himself as “U.S. intelligence.”

Rodriquez, born in 1941 in Cuba, was a rabbit anticommunist, an early recruit for the CIA involved in the Bay of Pigs, became a naturalized citizen, joined the US Army, served in Vietnam flying chopper and in the Phoenix program. Rodriquez claimed responsibility for the capture of Che Guevara, a major Cuban revolutionary figure, in 1967 in Bolivia. Guevara’s was shot and killed by a Bolivian solider. Rodriquez kept his Rolex watch as a war souvenir. Based on his history, it’s clear that Rodriquez was capable of murder.

In 1985 and 1986, Rodriquez was working for the NSC, running the Contra re-supply effort out of Ilopango Air Base in El Salvador. Rodriquez involvement in illegal drug trafficking is supported by sworn testimony by Celerino “Cele” Castillo, a retired DEA Agent.

For several years, I fought in the trenches of the front lines of Reagan’s “Drug War”, trying to stamp out what I considered American’s greatest foreign threat. But, when I was posted, in Central and South America from 1984 through 1990, I knew we were playing the “Drug War Follies.” While our government shouted “Just Say No!”, entire Central and South American nations fell into what are now known as, “Cocaine democracies.”

While with the DEA, I was able to keep journals of my assignments in Central and South America. These journals include names, case file numbers and DEA NADDIS (DEA Master Computer) information to back up my allegations. I have pictures and original passports of the victims that were murdered by CIA assets. These atrocities were done with the approval of the agencies.

We, ordinary Americans, can not trust the C.I.A. Inspector General to conduct a full investigation into the CIA or the DEA. Let me tell you why. When President Clinton (June, 1996) ordered The Intelligence Oversight Board to conduct an investigation into allegations that US Agents were involved in atrocities in Guatemala, it failed to investigate several DEA and CIA operations in which U.S. agents knew before hand that individuals (some Americans) were going to be murdered.

I became so frustrated that I forced myself to respond to the I.O.B report citing case file numbers, dates, and names of people who were murdered. In one case (DEA file # TG-86-0005) several Colombians and Mexicans were raped, tortured and murdered by CIA and DEA assets, with the approval of the CIA. Among those victims identified was Jose Ramon Parra-Iniguez, Mexican passport A-GUC-043 and his two daughters Maria Leticia Olivier-Dominguez, Mexican passport A-GM-8381. Several Colombian nationals: Adolfo Leon Morales-Arcilia “a.k.a.” Adolfo Morales-Orestes, Carlos Alberto Ramirez, and Jiro Gilardo-Ocampo. Both a DEA and a CIA agent were present, when the individuals were being interrogated (tortured). The main target of that case was a Guatemalan Congressman, (Carlos Ramiro Garcia de Paz) who took delivery of 2,404 kilos of cocaine in Guatemala just before the interrogation. This case directly implicated the Guatemalan Government in drug trafficking (The Guatemalan Congressman still has his US visa and continues to travel at his pleasure into the US). To add salt to the wound, in 1989 these murders were investigated by the U.S Department of Justice, Office of Professional Responsibility. DEA S/I Tony Recevuto determined that the Guatemalan Military Intelligence, G-2 (worst human rights violators in the Western Hemisphere) was responsible for these murders. Yet, the U.S. government continued to order U.S. agents to work hand in hand with the Guatemalan Military. This information was never turned over to the I.O.B. investigation. (see attached response)… 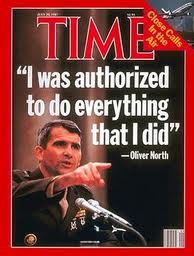 When the Boland Amendment(s) cut the Contras off from a continued U.S. government subsidy, George Bush, his national security adviser Don Gregg, and Ollie North, turned to certain foreign governments, and to private contributions, to replace government dollars. Criminal sources of contributions were not excluded. By the end of 1981, through a series of Executive Orders and National Security Decision Directives, many of which have been declassified, Vice President Bush was placed in charge of all Reagan administration intelligence operations. All of the covert operations carried out by officers of the CIA, the Pentagon, and every other federal agency, along with a rogue army of former intelligence operatives and foreign agents, were commanded by George Bush. Gary Webb (San Jose Mercury News) acknowledged, that he simply had not traced the command structure over the Contras up into the White House, although he had gotten some indications that the operation was not just CIA.

On Dec. 01, 1981, President Ronald Reagan signed a secret order authorizing the CIA to spend $19.9 million for covert military aid to the recently formed Contras— hardly enough money to launch a serious military operation against the Cuban and Soviet-backed Sandinista regime.

In August 1982, George Bush hired Donald P. Gregg as his principal adviser for national security affairs. In late 1984, Gregg introduced Oliver North to Felix Rodriguez, (a retired CIA agent) who had already been working in Central America for over a year under Bush’s direction. Gregg personally introduced Rodriguez to Bush on Jan. 22, 1985. Two days after his January 1985 meeting, Rodriguez went to El Salvador and made arrangements to set up his base of operations at Ilopango air base. On Nov. 01, 1984, the FBI arrested Rodriguez’s partner, Gerard Latchinian and convicted him of smuggling $10.3 million in cocaine into the U.S.

On Jan. 18, 1985, Rodriguez allegedly met with money-launderer Ramon Milan-Rodriguez, who had moved $1.5 billion for the Medellin cartel. Milan testified before a Senate Investigation on the Contras’ drug smuggling, that before this 1985 meeting, he had granted Felix Rodriguez’s request and given $10 million from the cocaine for the Contras.