Home Life Talking with the Christ

The Christ spoke with me last night. I call him that rather than the more familiar “Jesus” because I think it fair to say that we are not on a first name basis. I guess you can imagine my surprise, then, when of all the people in the world he could have spoken to – clergy members, political leaders, Fox “news” commentators, etc. – he chose me.

After all, judging by what I see around me, I am not by any stretch of the imagination what many, perhaps even most, would deem a good Christian, or even remotely religious as commonly understood. But who am I to question the will of the son of god? Maybe he just needed to rant a bit, I thought, to blow off steam.

I can certainly understand his frustration given the state of the world and the way his teachings have been ignored, misinterpreted, and exploited by those who claim to be his followers. Or maybe he just wanted to talk with someone he could trust to just listen and not distort his words for their advantage or to the disadvantage of other human beings. 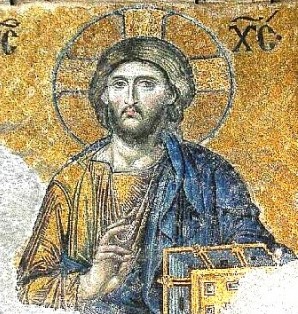 He began by asking me, and these are his words not mine, to tell those fu$king idiots who profess to be Christians to stop creating disunity and discord over stupid shit like whether an arbitrarily selected day, December 25th, a day that roughly coincided with the Roman pagan festival of Saturnalia, is referred to as Christmas, or xmas, or as a holiday.

He said such concerns are a meaningless distraction from what is truly important. He was clearly outraged that, with all the pain and suffering in the world, people claiming to be Christians would spend their time foolishly debating the ethnicity of a mythological character, Santa Claus.

Now maybe you are as shocked as I was to hear the Christ use such language. But if you truly knew him, what he was like, what he stood for, I think you would realize, as I did, that such “colorful language” was perfectly in character as the Christ was truly a rebel, a homeless vagabond who disregarded convention, and sought the company of revolutionaries, prostitutes, criminals, and lepers. Now I am not sure if this is his normal manner of speaking, after all we don’t talk very often, but it was clear to me, again in his own words, that he was really pissed.

But let me continue. He said that Christianity is not a tool through which to arrogantly claim superiority. Nor is it a cloak of self-righteousness. He said to follow him is to be humble and to accept the sanctity and intrinsic worth of all members of the human community. He said it is to love all people, no matter their color, religion, sexual preference, or country of origin and to concern themselves with the welfare of all living beings and with the earth he entrusted to their care. He said that no species or people are chosen and no nation exceptional.

He said, in retrospect, he regretted somewhat not being more assertive about how humans should behave (you know that free will thing) and that he has had his fill of bullshit, human pretense, and hypocrisy, much of it in his name.

He said it is time to clear his temple (this world) of moneychangers, banksters, and Wall Street criminals. That we should listen to Francis, his vicar on earth, and end inequality, poverty, and economic systems that breed greed, hatred, corruption, and war.

He said that to be Christian requires more than merely mouthing insincere, hackneyed assertions about “peace on earth.” Rather we must act to end the sacrilege of perpetual war and the sacrifice and slaughter of so many of his children. As our conversation drew to an end, the Christ offered what I took to be a warning of sorts, to all of us but especially to bigots, racists, warists, homophobes, and those who preach hatred and intolerance, that we had better get our priorities in order, our shit together, and we had better do it now not later, as he is really losing his fu$king patience. His words not mine.