They are the “Hilltop Jews” hoodlums, thugs, and scumbags. They come from Brooklyn, from Chicago, from Los Angels, from Paris and London. Criminal misfits, they immigrate to Israel and move to the Occupied West Bank, hoping to restore Jewish monarchy and practice thievery in the name of G-d.

Few days ago, these coward scumbags raided the village of “Qosra” near Nablus. However this times the youth of the village were ready for them, and they beat the hell of these Hilltop Jews.

Blooded and scared, they were calling for the Palestinian Security Forces liaison officers to protect them and secure safe passage for them. And of course this is exactly what the PA security forces did. Not so sure what will happen to these Palestinian youths who stood up to these criminal gangs?

If they escape the wrath of the Palestinian security forces they will have to face the IDF and long-term administrative detention and only because they defended their village against these terrorist scumbags.

They loot, they steal, they poison wells, kill livestock, they uproot thousand years old olive trees, and they burn fields. They have nothing to do all day but attack Palestinians villages with vengeance, destroying farms and livestock. They destroy, deface and vandalize mosques and churches.

They called it “price tags”; the price Palestinians must pay for being in Palestine, the price Palestinians have to pay when a bunch of squatters are removed by the IDF. They escaped the humiliations they receive in Brooklyn, Los Angeles and Paris, and they become the tough and rough guys of Israel. Easily acquire guns to shoot and kill at will, compliment of the Israeli Jewish State. 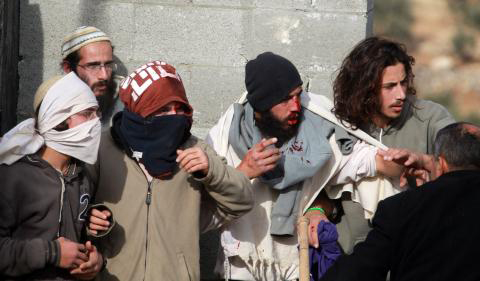 These so called “Hilltop Jews” occupy the hills overlooking Palestinian villages, they raid at will, kill at will, generously funded and sponsored by the many American Jewish not for profit tax exempted organizations and rich American die hard Zionist Jews (religious and non-religious) deeply rooted in hate and racism, with a mission, a mission to uproot Palestinians from their homes and villages and they have the money to do it.

They are the ones that sponsors and funds Jewish squatters in Arab quarters in Jerusalem and in Hebron, push fraudulent sale agreements through Israeli courts, courts that always rule in favors of these liars and defrauders, knowing well these documents are forged documents.

Driven by vengeance and hate deeply rooted in Talmudic teachings, indoctrinated by Rabbis who believe killings of Palestinians is a “ salvation”, a must, a mission, a sure way to come close to G-d. They believe Palestinians and Arabs have no place in Palestine or in the land they call Israel. 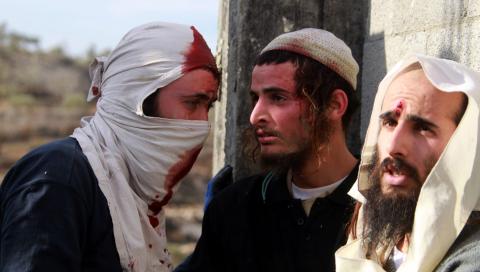 The Israeli Defense minister called them “terrorists” but does nothing to arrest them for their terrorist crimes, since these crimes are Ok, as long as they are directed toward the Palestinians. Defense Minister Moshe Ya’alon calls their conduct “legally and morally illegitimate” and only because it “hurts” the “settlement movement, not because they inflict harms against Palestinians.

They engage in gang style attacks against Arabs within the “Green lines” in Jaffa and Haifa, in Jerusalem and of course in Hebron, Nablus, Ramallah, and Jenin with no Palestinian village off limit to them.

Mahmoud Abbas and the PA/PLO 130,000 strong Palestinian Security Forces with an annual budget of $1.3 billion do not dare show up to protect Palestinian villages and villagers from these marauding gangs.

The PA security funding is conditional on its mission to protect and safe guard the Israeli Occupation, making sure the Palestinian population does not engage in any activities that upset the safety and security not only of the IDF, armed Jewish settlers but these criminal scumbags the so called “ Hilltop Jews”. 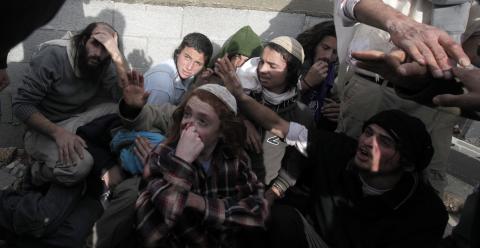 Israel is never in danger from Palestinians or any Arab country, let alone from Iran must face the danger from within. “Jewish terror” an extremely angry, hateful, out of control youths, with no respect for the state, its institutions and its people. They benefit from “state” protection but care less about its laws. The State of Israel always overlook any crimes committed by Jews against Arab and is only too happy that these gangs do its bidding.

I leave the readers with this link. A PBS Frontline report on home made Jewish terrorism and how the settler’s movement generously funded by American tax dollars will be Israel’s next war.