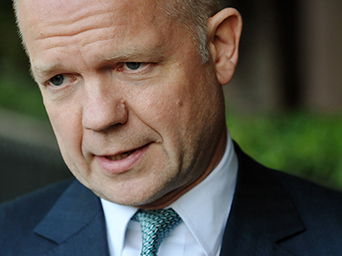 A few days ago we were talking about Agent Willie Hague’s self-proclaimed commitment to smoke out war criminals, bring them to account and support the International Criminal Court in its investigations.

“If you commit war crimes, crimes against humanity or genocide you will not be able to rest easily in your bed,” he said.

But knowing his record, isn’t that just another case of our brave Foreign Secretary shooting his mouth off? Judge for yourselves.

Mr Bellingham: To ask the Secretary of State for Foreign and Commonwealth Affairs how many times he has made representations to his Israeli counterpart on the situation in the Occupied Palestinian Territories in each of the last 12 months. [183766]

Hugh Robertson: The Secretary of State for Foreign and Commonwealth Affairs, my right hon. Friend the Member for Richmond (Mr Hague), has made four representations to the Israeli Foreign Minister on this issue in the last 12 months.
http://www.publications.parliament.uk/pa/cm201314/cmhansrd/cm140122/text/140122w0001.htm#140122113000040

Only 4 times in 12 months while Israel’s war crimes sky-rocketed?

The FCO website states: “Our position on Israeli settlements in the Occupied Palestinian Territories is clear: they are illegal under international law, an obstacle to peace and make a two-state solution harder to achieve.”

That’s not quite enough though. The so-called settlements are not just illegal. Under Article 8.2(b)(viii) of the Rome Statute the transfer, directly or indirectly, by the Occupying Power of parts of its own civilian population into the territory it occupies is a war crime. The FCO therefore needs to be more explicit.

Not long ago, Foreign Secretary Hague was preaching to the world, in a speech at The Hague of all places: “We have to ensure that when we are trying to build peace, we don’t overlook the need for justice…. We also need the will to deter leaders from committing crimes through fear of international justice, and if that fails, to hold those responsible to account.

“There is no doubt where Britain stands: we are with those who say that international law is universal and that all nations are accountable to it…. We are a country that believes in and upholds the Responsibility to Protect, and that is prepared to act to save lives – including through military action as a last resort.

“We pledge to recommit to the importance of fighting impunity for grave international crimes wherever they occur…. We will be a robust supporter of the International Criminal Court in its investigations.”

This is fighting talk, yet Mr Hague’s eagerness to end impunity has allowed him to make only four representations in the last 12 months while Israel’s war crimes against the Palestinians multiplied out of control, even during ‘peace talks’. Hague’s opposite number is former bouncer and all-round thug Avigdor Lieberman. Described variously as “a virulent racist”, “neo-fascist” and “certified gangster”, Lieberman is tarred with the war crimes brush by choosing to live in an illegal squat or ‘settlement’ on stolen Palestinian land.

From Hague there have been no actual condemnations, no upholding of the Responsibility to Protect, no action to save lives, no recognition of the need for justice, no activation of the ICC, and no holding of Israeli war criminals to account.

On the contrary, Mr Hague was recently instrumental in watering down our laws of Universal Jurisdiction to give them safe haven.

This contradiction with the lofty pledges cloaking him in the mantle of international law makes sense only when we understand that William Hague is a long-time admirer and supporter of the criminal Israeli regime and its certifiably bonkers leadership, as are the great majority of Conservative MPs who fly the flag for Israel in the British Parliament.

No wonder the Israelis take no notice of requests, consultations and urgings.

No wonder international law has fallen into disrepute.

Hague and his ilk, in their foolishness, have made sure of that.