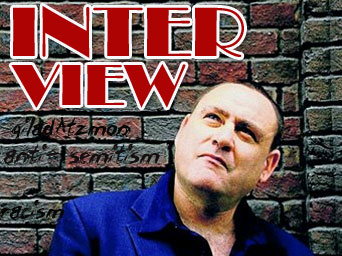 AU:  What led you to offer Dieudonné such support in his struggle against the French government?

GA:  Dieudonné is the true meaning of resistance.  Being cogent and coherent, he has managed to expose in France the corrosive bond between contemporary Zionised socialism and Jewish political power.

For some time now, many of us who, in the 60s and 70s, were inspired by Left thinking have been confused by contemporary ‘progressive’ politics. For some reason, the so-called ‘New Left’ was very quick to compromise on crucial issues to do with labour and working class politics. Instead of siding with the workers and those struggling in society, the post-68 Left  adopted an identity-politics discourse that was actually aimed at breaking up society and the working class into isolated marginalisd groups.

This led to political paralysis which in turn prepared the way for the invasion of big money, monopoly culture and globalization. It is this that Dieudonné, has managed to expose.

He has also identified the power of the Holocaust religion and Jewish lobby power at the very heart of political establishment. Being the author of  The Wandering Who – the book that took apart Jewish identity politics, I see Dieudonné as a continuation of myself. He is my twin and I stand up for both him and his cause.

AU:  Dieudonné’s detractors accuse him of antisemitism and as evidence they offer that in his show, (now banned) he said this about a prominent Jewish radio journalist: “You see, when I hear Patrick Cohen speak, I think to myself : Gas chambers…too bad”.

His supporters explain that Dieudonné was simply responding to a provocation from this journalist who said that Dieudonné must be blacklisted from mainstream media and that people with “mental illness ” shouldn’t be invited to comment publically. What do you think? Did he go too far or do you think he had the right to respond to someone who wished for his social, economic and professional demise?

GA:  Those Jews who insist that the Holocaust become our new state religion must accept that such a claim comes with a price. If you choose to identify yourself with gas chambers, Auschwitz and victimhood you must also accept that you will be identified as such by others.

I have no problem with Dieudonné’s reaction to Cohen. Dieudonné is an artist, his duty is to reshape and revise the vision of the world around us. Accordingly, placing a mirror in front of Cohen was a most appropriate thing to do.

AU:  The only main political party in France who didn’t join in this “Dieudonné bashing” is the nationalist National Front founded by Jean-Marie Le Pen. What is your explanation of that?

GA:  It obviously means that in terms of tolerance and multi-cultural/ethnic openness your Nationalists are way ahead of any so called ‘progressives’ and the Left. But this does not surprise me. The Left has always found it difficult to bond with working people, in fact, the entire ‘progressive’ ethos is elitist to the bone. And again, this should come as no surprise. After all, identifying oneself as  ‘progressive’ surely means that someone else must be ‘reactionary’ – and that someone else is the working man or woman.

This may explain why being ‘progressive’ is so attractive to so many Jews – it offers a godless alternative to their traditional choseness. It also explains why the workers generally stay away as far from the Left as they can. They much prefer identifying with the whole, the grand collective narrative, with the flag and with the language. rather than be progressive, they prefer to be patriotic and nationalist. And the outcome is clear: The left eventually drifts away into a state of total detachment which is the exact state of the French socialist at the moment.

Now, Dieudonné, has managed to galvanize this Left detachment. Here we have a black person who enjoys the support of the National Front and is cheered on by a massive popular movement consisting of migrants and White working class – and all this has now matured into one giant Left collective neurosis. How amusing is this?

AU: Thanks to Nicolas Anelka, the British Media started to talk about Dieudonné. According to Alain Soral, the  BBC conducted quite fair interview with him : http://www.youtube.com/watch?v=G8gdbXHsVks

Can you explain to us why the French media seem unable to give the same fair treatment to this story?

GA:  To start with, let’s not delude ourselves. It is easy for Brits to mock French kosher totalitarianism but believe me, no one in the BBC dares discuss the embarrassing fact that 80% of our Tory MPs are Conservative Friends of Israel. No one in the BBC has ever been brave enough to delve into the embarrassing fact that when Tony Blair took us into an illegal war in Iraq, his chief fundraiser was Lord Levy and the LFI (Labour Friends of Israel). But let me answer your question as concisely as I can.

This is hardly surprising, I’ve now begun to realise that George Orwell might well have been the last thinking person in the Left. The contemporary Left is a soundbite culture far removed from any dialectical thinking or intellectual exchange. It is indeed a tragedy.

AU:  In our last interview you told us that you “learned that most Palestinian NGOs are funded by liberal Zionist George Soros’ Open Society Institute.”  A French cartoonist named Joe le Corbeau, who was briefly arrested over a photo of a quenelle http://www.crescentcityjewishnews.com/man-arrested-over-photo-of-quenelle-in-front-of-toulouse-jewish-school/, suggested in one of his cartoons that Femen are funded by Soros : http://judeologie.com/2013/05/28/the-femen-powers-prostitutes-par-joe-le-corbeau/ Do you think that may explain why these women perform only in mosques and churches and never in synagogues?

GA:  Obviously, I don’t know whether Femen is funded by Soros but it wouldn’t surprise me if they are. Soros’ philosophy, as far as I understand it, is very simple. He is a Liberal Zionist who funds a lot of ‘good causes’ – causes that just happen to also be ‘good for the Jews’.

Now, let me address Femen’s preferred choice of ‘artistic’ venues. As you probably know, Post-Structuralism is pretty much a French philosophical school of thought and may be  defined as an attempt to dismantle all ‘grand narratives’ except the Jewish one. In concert with the spirit of the 68 students’ revolution and the Frankfurt Yeshiva, Femen are more than happy pull apart every French cultural heritage – except the Jewish ones.

Just follow the money trail, those people who facilitated their move to France – the record label and the ANR who signed them. Surely, you’ll find the answers within just a few minutes.

Here is an interesting anecdote that may throw some light on the topic. It was recently pointed out to me that in spite of the fact that Jewish radicals despise the Talmud and the Rabbinical culture and have been caught burning many religious congregation houses, mainly churches in Spain and the Ukraine etc.,  they have never burned a single synagogue.

AU:  People who support the right of Femen to blaspheme are often the same people who call for the banning of Dieudonné’s shows. Don’t you think that these kinds of double standards will lead people to rise up against the elite?

GA:  No doubt at all, and as we see, it’s already happening.

AU:  Former Israeli minister Shulamit Aloni, who recently passed away, once said that accusation of antisemitism is a “trick” used to shut down critics of Israeli policy:http://www.youtube.com/watch?v=LLbtu0-mgvw  How do you explain the current weakness of the Israeli left?

GA:  ‘Weakness’ is an understatement. The Israeli left is non-existent and for a good reason: Jewish Left is an oxymoron. While ‘Left’ is a universal concept, Jewishness is a tribally driven ideology. Even Aloni,  whom I admired, wasn’t exactly a ‘universalist’. She didn’t really campaign for the return of the Palestinian refugees to their homes and villages, she was mainly concerned with Israel being a ‘Jewish civilization’ as opposed to a universal one.

It is not a secret that the so-called ‘Jewish Left’ is in practice, a form of National Socialism. Those ‘radical’ Israeli leftists support a racially-driven ‘egalitarian’ philosophy – which applies to Jews only. In other words, they are full of contradictions so it’s hardly surprising that they are now pretty much extinct.

On the other hand, right wing Israeli politics,  is as consistent as it is crudely unethical. It postulates that Jews are entitled to return to Palestine, and it draws on a vile, militaristic ideology and practice that aims to maintain this  Jewish hold on the land. Right-wing Zionist leaders admit daily to not being ethical – but they justify their national project in terms of survival.

Since Israel defines itself as the Jewish State, it is only natural for Israelis to identify with a consistently tribal right-wing ideology instead of some half-baked, convoluted and totally inconsistent (but always kosher), socialist clap-trap.