VIDEO EXTRA: Dan Rather reports on collapse of WTC-7 and Twin Towers

Independent journalist, Matthew Mills was arrested on Super Bowl Sunday after he grabbed a microphone away from MVP, Malcolm Smith.

Some are speculating that the 7 second broadcast delay in the post-game news conference could have allowed the networks to censor Mills’ comment, but a decision was made to “let it happen”. Others say the censors were asleep at the switch and merely caught off-guard by an official-looking “truther”.

“Investigate 9-11; 9-11 was perpetrated by people in our own government”

Smith appeared startled but regained composure to suggest that someone should check his (Mills) press pass.

Mills gained access to Metlife stadium by using an old  pass that looked very similar to those handed out to the media by security.

Mills surprised himself when circumstances and dumb luck worked to get him inside the stadium.

“I just saw my opportunity to get my word out there and I took it.” 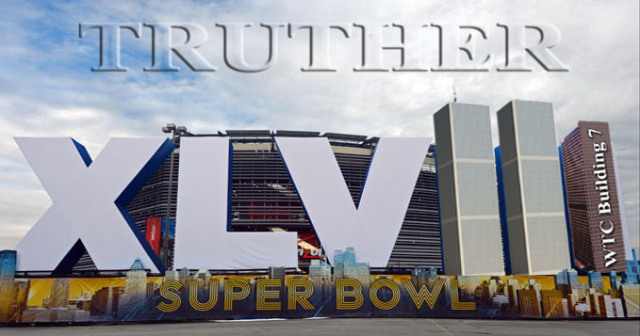 Is it a coincidence that Seahawks Coach, Pete Carroll, is a 9/11 Truther?

Carroll had received a packet from AE911Truth.org founder, Richard Gage, AIA.  The packet contained a forensic analysis detailing the use of explosives to collapse of the Twin Towers, World Trade Center, Building 7.

In a an interview with retired Army general Peter W. Chiarelli, Carroll had this to say:

“While officials in New York City went about the systematic destruction of the vast amounts of evidence comprising the remains of the World Trade Center, official handlers of the Pentagon strike undertook the much smaller task of erasing physical evidence that a jetliner crashed into the Pentagon. The resulting evidence vacuum created the conditions for a protracted controversy about what hit the Pentagon.”  (Source)