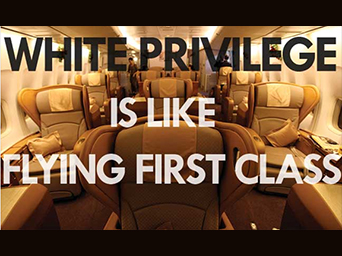 White Privilege is a provocative term used by the US mainstream media to engender race hatred and retaliation in America’s Black communities.

These inflammatory words were likely contrived in tax-free think tanks owned and operated by the New World Order’s elite, known to some as the Controllers.

The words White Privilege also serve the ruling Controllers the dual purpose of making many White Americans ashamed of their race and heritage – a birthright which, at one time, made America the envy of the world.

The Controllers have obviously been exacerbating our racial problem, trying to fill Whites with propitiation and Blacks with hatred.

By owning and controlling most media outlets in the world, the Controllers have gone largely uncontested in effecting their Divide and Conquer doctrine.

This heinous policy of encouraging dissent amongst the masses has enabled far less than one percent of the world’s  population to suppress the rest of us.

Every day, around the clock, the utterly controlled media pours out “proof” of the internal friction, strife, conflict, and wars among the peoples of Earth.

What commonly goes unnoticed, however, are the hidden hands of the Controllers, who create most of this infighting through their command of national intelligence services – principally, the ubiquitous US Central Intelligence Agency, and Israel’s Mossad.

Be it liberals versus conservatives, pro-lifers opposed to abortionists, straights in opposition to gays, Jews claiming anti-Semitism – throughout history – against almost everyone, or Blacks hostile to the fighting words of White Privilege, the Controllers’ intelligence services, media, and governments have all been busy dividing and conquering mankind.

It is time that man discovered the hidden hands that have created the most deadly portions of this turmoil. And those blood-stained hands belong to the subhuman Controllers of Earth, who makeup the International Banking/Monetary Cartel.

While the term White Privilege is not foremost in the Controller’s arsenal of  weapons for internecine warfare, those fighting words give us a straightforward piece of proof of the Controller’s covert attack on the family of man.

Still, it is distinctly discouraging to witness so many bright, well-meaning, Black and White Americans picking up the term White Privilege and using those words as if they sprang from their own minds. 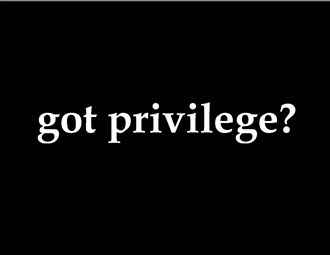 Such deluded Americans obviously have no idea that for every White on Black crime committed in America there are scores, if not hundreds, of Black on White crimes that are never even reported in the controlled media. These crimes have largely been provoked by the corporate media’s constant to message to Blacks: You are being abused by White people.

This utter exaggeration of White crimes compared to Black crimes is done for two reasons: to inflame Blacks, and to cower Whites.

But who can rightfully blame the Blacks, when the entire power structure is turned against them, while the US government pretends to be their saviors? The hopeless economics of our Black communities, only made worse with the tons of street drugs funneled into them by the CIA, tells us of the Controllers’ real intentions regarding Black Americans, who are literally being bum rushed and channeled into crime.

Unbeknownst to them, American Blacks are being used as pawns for racial discord. Once again, in the Controller’s effort to prove the existence of White Privilege, is a front-page, headline story on CNN’s website.

Based in Jacksonville, Florida, Black columnist Tonyaa Weathersbee, with the approval of CNN editors, wrote the following report.

So it looks like Michael Dunn, a white man who fatally shot black teenager Jordan Davis for refusing to turn down his “thug music,” may be going to prison for the rest of his life.

But that’s a consolation prize. Not a real victory.

Someone on that jury saw [Jordan] Davis with a shotgun that likely never existed.

So even though Dunn is going to prison [for life], it’s tough to feel good about the verdict.

What the verdict says is that in this nation, in the 21st century, some white men still believe they have the right to intrude into the space of young black men and make demands. And if the black man is unarmed, with no weapons except his words, those white men can still kill him. And call it self-defense.

All they need is a jury to buy it.

Life in prison for Michael Dunn is not adequate for an angry Ms. Weathersbee; she wants death. And she is on a mission, with the consent of her editors, to create even more angry women and men in America.

Of the fifty reader responses to Ms. Weathersbee’s incendiary report was one that presented the rest of the story.

Blacks thus committed 7.5 times more violent inter-racial crimes than whites even though the black population is only one-seventh the size of the white population. When these figures are adjusted on a per capita basis, they reveal an extraordinary disparity: blacks are committing more than 50 times the number of violent racial crimes of whites.

Of course, the Controllers’ end-game is a massive race war, which will toll heavily on both races, but probably more heavily on the guilt-ridden Whites.

White Americans seem to be on their way to second-class citizenship due to their lack of understanding of what they are allowing to be done to themselves, all brought about by a force that is far more evilly clever than they are.

From the simple gambit of race-baiting to the ruthless slaughter of innocents in the Middle East, the Controllers are hurriedly exercising their tyranny.

From chemtrails and its evil products (overwhelming heat, water shortages, sick humans, dying plants, and dead animals), to election fixings, to economic disasters, and media mind-control, our world is systematically being destroyed – all with our tacit collective agreement.

The geo-politics of our world, and particularly in our country, do not work in the way the Controllers want you to believe they work. If, however, you will take a contrarian approach to all of the reporting presented by the major media, you will always come closer to the truth.

Never expect the Controllers, and their minions in the United Nations, central governments, and mega-corporations, to conform with the accepted standards of decent and ethical behavior.

Such understandings hold the potential of setting you free of the horrible negativity that shrouds our world from the light and love of truth.