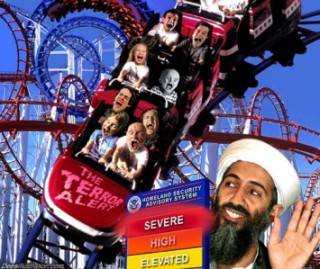 “Be afraid. Be very afraid.” Yesterday it was a tag-line from a horror movie. Today it is the unofficial motto of the US government.

David Cronenberg’s film The Fly told us to “be very afraid” of human beings turning into insects – a warning originally issued by Franz Kafka’s novel The Metamorphosis.

Kafka and Cronenberg were right. Behavior control experts have learned to “hive” the mass mind, effectively turning human beings into the moral, intellectual and spiritual equivalent of insects. And their biggest social control tool is fear.

When people are terrorized, they let their leaders get away with murder. So corrupt leaders have applied “Terror Management Theory” to controlling and exploiting populations.

The Wikipedia entry on Terror Management Theory explains: “When a follower’s mortality is made prominent they will tend to show a strong preference for iconic leaders. An example of this occurred when George W. Bush’s approval rating jumped almost 50 percent following the September 11 attacks in the United States.”

George W. Bush an iconic leader?! The notion is laughable. Bush is a doltish drunk who failed at everything he tried. Unlike Obama, Bush is a bad liar – which would have disqualified him from political office were it not for his money and connections and ties to the companies that manufacture voting machines.

But when Americans were terrorized by hideous images of plane crashes, fireballs, and tall buildings exploding into pyroclastic dust clouds chasing screaming crowds through the streets of New York, they would have willingly submitted to a chattering purple-rump baboon as their “iconic leader.” Though Bush’s ratings rose 50 percent, the baboon probably could have gotten 60 percent.

According to TMT, human activity is driven by fear of death. People keep busy to avoid facing their own mortality. When reminded of death, they react in predictable ways – including giving up their rights and handing money and power to authoritarian leaders. So unscrupulous leaders, by highlighting certain kinds of threats, can terrorize people into submitting to corrupt authority.

In reality, lightning strikes and bathtub drownings are more of a threat than terrorism. But no politician can get away with saying “give me money and power and I will protect you from bathtubs and lightning.”

Spectacular Hollywood-style violence featuring terror attacks, crazed gunmen firing into crowds, and similar imagery is – according to Terror Management Theory – the perfect tool of social control. All the leaders need to do is stage a certain number of terror incidents and blame someone else. Then they can “crack down on the terrorists and criminals” and keep the population in a state of slavish obedience.

Have US leaders ever staged a fake terror incident?

The answer is yes. The CIA has used false-flag terror attacks to overthrow leaders it doesn’t like, and empower leaders on its payroll, all over the world. Recently-declassified documents confirm that the CIA used false-flag shootings and bombings when it installed the Shah on the throne in Iran in 1953.

Another example: Operation Gladio. This was a US-led terror operation that slaughtered European civilians in shootings and bombings during the Cold War. Caught and prosecuted, one low-level participant explained: “You had to attack civilians, the people, women, children, innocent people, unknown people far removed from any political game. The reason was quite simple: to force…the public to turn to the state to ask for greater security.”

Though an investigation by the European Parliament proved that the American Pentagon was behind the wave of “radical leftist” terror that swept Europe during the Cold War, none of the planners or commanders of Operation Gladio has ever been prosecuted. So Europeans have good reason to suspect that the Madrid train bombings of 2004, the 7/7 London bombings of 2005, and other “terror attacks” are also Gladio operations directed by corrupt elements of the Western military and intelligence apparatus.

These skeptics have good reason to be suspicious.

The Boston bombing was an obvious false-flag operation. Photographs taken at the scene show that Craft International paramilitary forces carried out the bombings, while the Tsarnaev brothers were innocent patsies.

Now the authorities are killing everyone who could reveal the truth. Corrupt police shot Tamerlan Tsarnaev to death while he was naked and handcuffed; then repeatedly ran over his body with a vehicle. Witness Ibragim Todashev was arrested by the FBI, interrogated for several hours, then murdered execution-style – probably because he knew the Tsarnaevs were innocent and refused to change his story. Honest FBI agents connected with the Boston bombing have been “falling out of helicopters.” Now the Terror Management Theory forces are seeking the death penalty for Dzokhar Tsarnaev in hope of pressuring him to falsely admit guilt by accepting a plea bargain.

The Sandy Hook school shooting also appears to have been an exercise in Terror Management Theory. A recent article entitled ”Top Ten Reasons: Sandy Hook Was an Elaborate Hoax” by professors James Fetzer, James Tracy, and co-authors builds a compelling case that this “school shooting” was a contrived spectacle.

During an interview Friday on Truth Jihad Radio, Drs. Tracy and Fetzer discussed evidence that both the Boston bombing and the Sandy Hook shooting may have featured “crisis actors” posing as victims and survivors. If so, both events must have been “terror drills” that “went live” as part of a highly-classified Terror Management Theory social-engineering project.

James Fetzer cited a recent investigation by former Florida State Trooper and school security expert Wolfgang Halbig: “Wolf thinks this (the Sandy Hook false-flag event) was in the planning for years…it was very elaborate.” Halbig’s investigation has been hampered by the pervasive secrecy surrounding the Sandy Hook shooting. For example, when Halbig asked for the FBI’s report on Sandy Hook, Fetzer says, the FBI personnel “laughed in his face and told him it wouldn’t be released in his lifetime.”

Why would a domestic school shooting be a classified national security secret?

James Tracy speculated on possible motives for staging a school shooting at Sandy Hook: “There was the realization that it would have given a two to three week window in terms of gun control legislation. And keep in mind that this is also the rationale in the matter of school safety and safety in public places. If we can’t expect our children to be safe in public schools, can we expect ourselves and our families to be safe in broader public spaces?”

A nation that cowers in fear at home in front of the television is a nation vulnerable to being manipulated and swindled by its corrupt leadership.

Dr. Fetzer has been targeted by bomb threats and Dr. Tracy by media and academic harassment. The media will not mention the obvious questions about these events, except to heap ridicule on those asking them. This adds yet another layer of terror – fear of ridicule and social ostracism – to the mix.

It seems that scary television images are capable of terrorizing people so badly that they become incapable of asking questions. That was the lesson of 9/11.

Today, America is a nation paralyzed by fear; while its larcenous leaders – empowered to shred the Constitution and steal trillions of dollars through the shrewd use of Terror Management Theory – are laughing all the way to the bank.