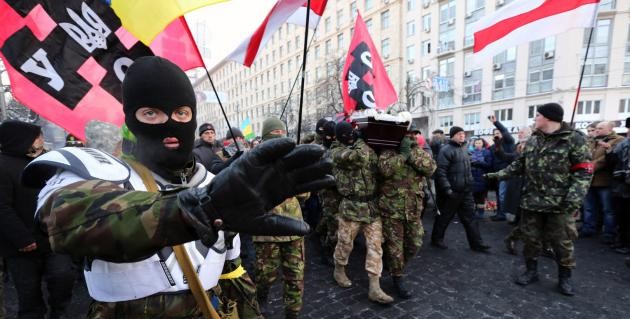 [ Editors Note:  We have solid confirmation here of the West’s fascist coup on Ukraine, and who was behind the staged shooting of both the demonstrators and riot police to quickly erase the concession agreement that the old and new government had agreed to.

We know now that was just a cruel ploy. Yesterday’s Catherine Ashton phone call intercept fortunately exposed that sordid story for all to see.

Our sources agree that Yatsenyuk, the interim prime minister, must have had a deal with Right Sector to provide the massacre to get he and his gang into power, where he would then put all the Right Sector thugs on the government payroll as official military units.

Why do we believe this?…because he did it so quickly. He had to pay to play, or they might have found a new guy to be Prime Minister. And purging the loyal army generals was a public message to the whole military command who the palace guard was going to be.

Isn’t spreading democracy around with your tax dollars fun? Aren’t you proud of your righteous American government for being so kind, so caring?

Don’t hold your breath for either the EU or the US putting any conditions on their financial help that all of the paramilitary group thugs have to pass a criminal background check.

And they might also want to look into whose employment they have been under for the past five years, to make sure they are not professional terrorist goons, which the West seems to have chosen as their new ‘We are not the Peace Corps’ gift to the world.

This of course gives Putin’s defensive moves complete justification now, as we can only assume Russian Intel has known exactly what the coup-meisters plans were.

They were not about to let themselves be sitting ducks for Right Sector thuggery in the Eastern Ukraine provinces where the military-industrial production is located, or whatever else the Russians would not dream of letting go over to the Euro Neo-Fascists.

Say your prayers that Russian Intel continues to drop these phone intercept gems out to us, a few a week. This is my official request for them to give us what they can, so we can use it against our own dirt bags… Jim W. Dean ]

KIEV, March 6. /ITAR-TASS/. The appointed by Verkhovna Rada Ukrainian Prime Minister Arseniy Yatsenyuk has signed an order to dismiss three deputies of Ukraine’s defense minister as they opposed to giving the Right Sector militants the status of regular military units.

The source added that on Wednesday, at a closed session of Ukraine’s Defense Ministry the military officials expressed sharp criticism over giving the Right Sector militants the status of regular military units. “They stated that the legal adoption of this initiative would lead to a final split of the society and the country, and bring chaos into the operations of the state’s security agencies,” the source said.

He also said that “one of these military officials at this session directly told Arseniy Yatsenyuk that actions of today’s Kiev authorities that overtures with radical nationalist organization strip Ukraine of chances to ensure national unity, and it is just harmful to involve the state military agency in such dangerous games”.

“In this situation, the authorities were forced to make the corresponding management reshuffles. And they were implemented,” the source added, recalling that Petro Mekhed has been appointed as the new deputy defense minister.