[ Editors Note:  At the end of their war Libya was awash with guns, and oil…and it now seems, tribalism.

Way too many people with guns who want that to be their lifetime occupation knew that only a direct line to oil revenues could assure their being able to ‘hire themselves’ for that job.  Long term economic development is not something that seems to register well with them.

The succession of parliaments have been primarily concerned with their own infighting, everyone expecting that whoever was in charge of whatever would steal as much as they could, including them.

So we now have a situation where any group that loses a political battle (welcome to democracy) just activates their militia army to take over a port or refinery.

The drop in oil production has gone from 1.4 million barrels a day to under 250,000. The groups holding the oil economy hostage don’t seem to understand that shrinking the countries oil revenues by 80% is shooting themselves in both feet. The world is awash with excess petroleum production so Libya’s loss in another producer’s gain.

As is typical in third world countries the military prefers dealing with unarmed civilians…and people with lots of weapons??…not so much. It seems nobody trusts the central government having an effective military enforcement option.

That withstanding, the Benghazi tribes do have legitimate concerns about an equitable split of the country’s oil revenues and corruption investigations. Gosh, imagine if that caught on world wide!

We are looking at a failed country here, and an open endorsement that maybe a ‘strongman-autocratic’ government is suitable to a tribal society there no one trusts anyone.  Such a people can hardly be called a country really, and you are seeing the proof, when the most popular middle class job is ‘gunman’…oh, excuse me, that is, ‘an oil security specialist’… Jim W. Dean ]

Libyan Prime Minister Ali Zeidan has warned that Tripoli will bomb a North Korean-flagged tanker which is illegally loading crude oil from an eastern port in the country.

“The attorney general has given the order for the ship to be stopped,” the Libyan prime minister told a news conference on Saturday, stressing, “All parties must respect Libyan sovereignty. If the ship does not comply, it will be bombed.”

Earlier on Saturday, the militants controlling the eastern Libyan oil facility of al-Sidra attempted to load crude oil onto the North Korean-flagged tanker, dubbed the Morning Glory, in defiance of the central government.

The state-run National Oil Corporation (NOC) says the vessel is actually owned by a Saudi company. The militants have warned the central government in Tripoli against planning any attack to halt their independent oil sale.

The Libyan prime minister further said the authorities had told the tanker’s captain to leave Libya’s territorial waters, but the captain said armed gunmen onboard were preventing him from leaving.

Libya’s acting Oil Minister Omar Shakmak has denounced the militants’ move as an “act of piracy,” saying, “This is a violation of national sovereignty. It is up to the Defense Ministry to deal with this ship.”

Tripoli has made efforts to end a wave of protests at oil ports and fields across the country that have slashed oil output to 230,000 barrels per day (bpd), down from 1.4 million bpd in July.

Libya heavily relies on its key oil and gas sector, which accounts for the vast majority of hard currency receipts and government revenues, and the disruptions to the sector have badly influenced its economy. 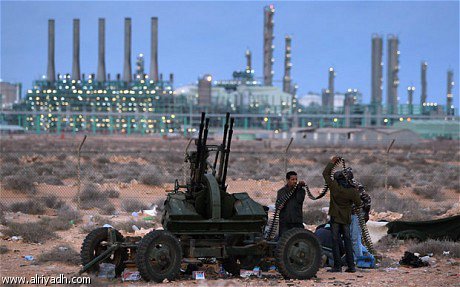