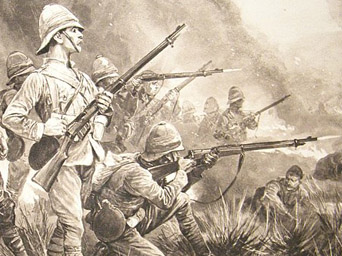 I’ve always had a passion for history, and I first started to realise how governments and the media collaborate to manufacture “history” through the study of the Boer War.

The Boer War was the first historical incident that I learned was completely different to how the accepted history tells us it was.

The actuality of what happened to provoke that war and who was behind it wasn’t hidden very deeply, in fact it was barely hidden at all.

Cecil Rhodes provoked it by sending 500 heavily armed British mercenaries into the Boer state (The Jameson Raid) in order to provoke a rebellion against the Boer government by the British settlers and merchants living there.

The Boers surrounded this group well short of its objective, forced its surrender and humiliated Rhodes and the British Government. Rhodes knew that all he had to do to conquer the Boer state was provoke war, that was the reason for sending those 500 men, he knew they would not succeed, but he knew that sending 500 Britishers to start an uprising of Britishers in the Boer states would provoke the Boers into taking some action against it’s British minority.

Rhodes could then use his cosy relationship with the British press to spin this into Boer attacks on poor innocent British settlers and that would soon have the British public clamouring for it’s government to send troops to teach these damn Boers a lesson for daring to lay hands on British citizens.

The situation I just described fits exactly into the standard model of regime change that we have seen implemented many times since 1945 by the CIA-M16-Mossad (in reality, they largely operate as a single agency). Let me lay it out in it’s basics:
It really is that simple, and it has been carried out so many times, currently it is being done in Syria, a couple of years ago we saw an absolutely blatant and textbook case in Libya, before that Iraq and Afghanistan.

In the case of the Boer War, the motivating factor was two-fold, firstly, the Boer states were sat on top of one of the largest gold deposits on the globe, with the extra benefit of their being lots of diamonds and other precious minerals.

Secondly, the Boers were a group of Europeans (Dutch Calvanists, French Heugenots, German Protestants) who had turned their back on the established order and had established for themselves an independent homeland outside of the global financial system, they had a government owned and controlled central bank that issued debt-free currency backed by gold, which meant they had zero inflation and zero interest on credit.

Quite obviously, such a state and financial system is diametrically opposed to how the banking systems of all other countries work (at the time of the Boer War, both Britain and the US had currencies backed by gold but neither had a state-owned and controlled central bank) and was not acceptable to the international bankers who control the world – The Rothschilds and their partners/vassals.

It was no secret that Cecil Rhodes worked for the Rothschilds and they were the ones who financed all of his murderous, grandiose plans for imperial conquest and exploitation of native peoples. Therefore the Boer war is a straightforward case of an agent of the Rothschilds using Rothschild money to arm a group of mercenary terrorists then sending these gangsters to attack a state from the inside thus provoking war between the state and the state controlled by the Rothschilds (Britain).

It is no secret that the Rothschilds loaned the British Government money to finance the war so the 1 million British and Empire troops who served in South Africa were effectively mercenaries hired and paid for by the Rothschilds.

Therefore, my study of the Boer War lead me to understand how wars are planned, organised, provoked and financed, and who is behind this evil mechanism that slaughters innocent people en-masse in order to funnel all of the world’s gold into the hands of a handful of families who control the world’s financial system.

You can take the pattern I just explained and apply it to almost any conflict since the Boer War, it will fit like a glove.