Home Life Operation Ukraine – "God How I Love the Smell of Psyops in... 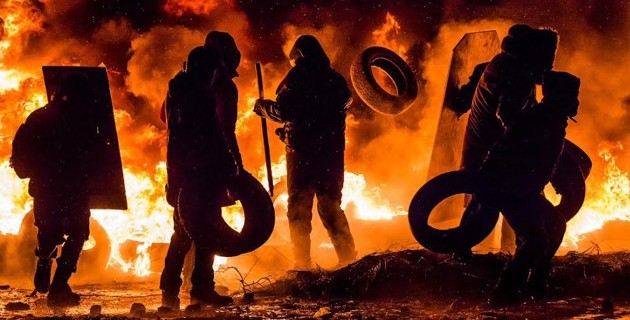 In January, 2014, Major General Paul Vallely, retired from the US Army 21 years ago, met with leaders of Al Qaeda, while in Syria. His “cover” was that of “military analyst” for Fox News, the “tabloidesque” propaganda arm of what can only be called the New World Order.
Vallely wasn’t there to report. He was there to manage, “aid and comfort” and much more. The Ukraine is a Vallely concern also. Who is this man?
Most Americans are used to seeing emails quoting Vallely’s views, that non-Jews in Israel should be stripped of their citizenship and sent to concentration camps. He is quite open about this.
He also claims President Obama was born in Kenya. He claims to have proof but when asked, and he has been asked many times, he doesn’t have it. Maybe his dog ate it or he left it in his other pants and it went into the washing machine. Such things happen.
There is a reason for concern about Vallely, not because of his buffoonish behavior on Fox News but because, behind that façade of dull witted incompetence, Vallely has a history.

In 1980, Vallely and Michael Aquino, yes, the accused mass child rapist and leader of the Temple of Set, the satanic cult of immense power within America’s military community and Washington’s power elite, wrote a stunning paper on psychological warfare. Few know of Vallely’s longtime association with Aquino, one time secretive head of the NSA, commonly known as “the most evil man in America.”

Their paper, From Psyop to Mind War, described how total control over all forms of information could achieve any military goal simply through deceit. Thus, when we see Vallely at the scene of a false flag chemical weapons attack in Syria or trace his involvement in the Ukraine, where gangsters using false flag terror tactics, employing snipers to kill their own supporters, it takes little imagination to assume his association with satanic cult figure Aquino is “alive and well.”

An analysis of events in the Ukraine, those involved, how things unfolded and the current period of “exploitation” have yielded one conclusion. This overthrow of the Ukraine was a clandestine operation using multiple teams, some onsite, some in the US and Western Europe.
A major part of this operation was Psychological Warfare, a Vallely and Aquino specialty.
Shooters, propagandists, “deal makers” and controlled press, all played critical roles. The overthrow of the Ukraine and the subsequent moves to discredit both President’s Putin and Obama and provide cover for a failing Middle Eastern destabilization move were all on the “menu.”
This is a global operation with many players and many battlefronts. Putting the Ukraine on “center stage” has taken major defeats off the front page.

The “Ukraine” was simply a part of “the great game.”

The “Ukraine” was a carefully scripted “psyop” planned and executed, we are now finding, by players many also involved in “Operation Benghazi.”
For those who have only followed “allowed” reporting, key components of Benghazi are missing, particularly how the attack was coordinated with a Terry Jones video. For those who may have forgotten, Jones, like Aquino, is a demonic cult figure with a history of ties to the intelligence community.
Jones likes burning religious texts, generally carefully timed to coincide with a clandestine operation, often a “false flag” in need of a mindless distraction. Jones is notorious for his “mindlessness.”
Jones spent 12 years in Germany as a Gladio operative prior to becoming the most famous religious figure in the world despite the fact he represents a tiny church in a rural area with only 12 parishioners.
For those unaware, “Gladio” was a NATO covert operation that supposedly got out of hand and metastasized, just like Al Qaeda.
On the day of the Benghazi attack, news reports credited an amateurish Terry Jones video, seemingly attacking Islam as the precursor for the killings of the US Ambassador and his security detail.

Behind the Jones video was PJ Media, a “psyop” group tied to right wing extremist groups in the US. Behind them were the Hudson and Potomac Institutes, jokingly referred to as “stink tanks” by political insiders.
The real stench in Washington emanates from these organizations, which include the American Enterprise Institute, the Heritage Foundation, the US Chamber of Commerce, the National Association of Manufacturers and others. Vallely heads several “odiferous” organizations. Their names may sound innocent. They are what we used to call “fronts.”

The players behind the Ukraine are, surprisingly, the same as Benghazi, with the same goals, in particular, undermining a US foreign policy that had, during President Obama’s second term, become almost rational.
Rational leaders in both the US and Russia, working in tandem, communicating, strategizing, nothing could be more dangerous to “certain globalist interests.”

Last week, a recording of a conversation between Estonian Foreign Minister Urmas Paet and EU Foreign Affairs Minister Catherine Ashton revealed a number of interesting issues. The EU planned on flooding the Ukraine with cash despite the fact that it was made clear that the “new government” is simply a pack of criminals.
Paet, during the call is an honest and sympathetic figure, to be admired. I am not able to say the same of Ashton, based on my own rather subjective examination of her tone and responses.
Ashton’s voice betrayed the cynicism of someone who may well have already known that the murders, let’s call them what they are, war crimes, were very much a part of the operation she is now pouring $15 billion into, “after the fact.”
Was there involvement “before the fact?”
Her “halfhearted” acknowledgement of a need to “investigate” was, in itself more than “telling.” If Paet’s information was credible, and it certainly seemed to be, then the EU just opened the door to a war criminals, murderers and gangsters. Ashton’s indifference showed the same curious “moral flexibility” so often seen in EU politicians.
The second call we will look at involved Victoria Nuland, the State Department Undersecretary who used regrettable language in a phone call planning the takeover of the Ukraine by war criminals and gangsters.

For those who don’t know, Nuland is the wife of John Kagan of Project for a New American Century, the group that pushed the US into the war in Iraq and Afghanistan. Can one assume that, because of her marriage, there may well be a hidden agenda?

Things, don’t just “happen,” not in the real world, not anymore. There is too much surveillance, too much control of media, control of social networks, too many “players” for real political movements to gain momentum and not be crushed. Occupy Wall Street got the whole treatment, arrests, tasers and chemical weapons, infiltration, “gate keepers” and agent provocateurs.

The anti-war movement in the US during “Vietnam” may have been the last success as far as real political movements go and there are even questions about that. Many of the Watergate tapes and the later recordings released of discussions between Nixon and Kissinger expressed a singular dedication to suppression of dissent, a key component of the Aquino/Vallely paper.

By the early 1980s, the US had developed a broad capability in the area of psychological warfare. One of the first victims was its own military.


The primary tool used to reorganize society, to eliminate normal affinity groups such as organized labor or small business, each with rational agendas tied to issues of taxation and economic policy, and end their effectiveness, is religion.
It is no accident that the bizarre and heretical extremist sects of the most backward regions of America’s South became powerful in Washington.
Their belief systems based essentially on biblical prophecy, ancient aliens and systematic mistranslation of religious texts, extrapolating “error” into fanaticism and dogma swept both the military and, with Bush family influence, Washington.
The move to satanic worship, human sacrifice and large scale child sexual abuse, the underlying scandals continually resurfacing whenever the Reagan/Bush/Bush years are examined, takes little effort to document convincingly. Current “house cleaning” in America’s nuclear forces is a response to this “problem.”

Today, the landscape of America is dotted with thousands of “mega-churches,” some with vast congregations, their ministry made up of little more than clowns and charlatans. The message is always the same, hatred of homosexuals, of Islam, of “liberals” all packaged in garbled “religion speak,” a patois of “code words” that are part of a carefully crafted psychological operation begun by Army intelligence groups during the 1960s.
A broader look at America reveals a “dark underbelly,” a people willing to “consent” to being governed by war criminals. The pattern of the Ukraine has surfaced many times. September 11, 2001 was an early outing for the Aquino/Vallely methodologies.
Ukraine is certainly another. There will be more.