The word “kosher” originally only applied to Hebrew/Jewish Biblical demands allegedly made by God on the Hebrews/Jews regarding the food they ate and how they slaughtered animals that were to be consumed as food.  (It’s comical and entertaining when we realize just how foolish the Jewish god is as shown by such things as his instructing the Hebrews/Jews not to eat four legged fowl at Leviticus 11:20 and pictured below.) However, the word “kosher” is often used in modern society denoting something as being good or right. For

example, if there seems to be something wrong or bad about something, it is often said, “That’s not kosher.” The clear implication is that if it was kosher it would be good, but since it’s not seen as kosher, it’s bad or wrong. Or, it’s sometimes said, “That seems kosher to me.” This indicates that something is good and right. (The honest objective reality of kosher is that it is bad and evil because it is a religious scam that makes animals suffer needlessly and takes money from unsuspecting Gentiles and puts it in the pockets of the Jewish clergy while strengthening the Jewish cause of Israel over all. For two Deism leaflets for distribution in PDF click here and go to the bottom of the leaflet list and click on Protect Your Pocketbook and Your Dignity and Bible Fowls and see the bottom of this article for a cartoon regarding the Hebrew Bible god’s instructions on food preparation.)

In this article I am using the word kosher in regards to slavery because the Hebrew Bible/Old Testament makes many claims that God instructed the Hebrews/Jews about slavery just as it’s claimed he gave instructions regarding slaughtering animals and food.

The Hebrew Bible/Old Testament claims God permitted Jews to own fellow Jews as slaves. However, the Jewish slaves were to be freed after seven years of slavery while the Gentile slaves of Jews were to be slaves to the Jews “for ever.” The permanency of Gentiles being owned by Jews as slaves specifically included Gentile children who were to be an inheritance of property for Jews to leave to their own children. This is all made crystal clear when we read Leviticus 25:44-46 which belittles God by claiming God instructed Moses to instruct the Hebrews/Jews (talk about hearsay!) as follows:

“Both thy bondmen, and thy bondmaids, which thou shalt have, shall be of the heathen that are round about you; of them shall ye buy bondmen and bondmaids.

“Moreover of the children of the strangers that do sojourn among you, of them shall ye buy, and of their families that are with you, which they begat in your land: and they shall be your possession.

“And ye shall take them as an inheritance for your children after you, to inherit them for a possession; they shall be your bondmen for ever: but over your brethren the children of Israel, ye shall not rule one over another with rigour.”

Another example given in the Hebrew Bible/Old Testament of anti-Gentileism which ended in both genocide and slavery is found at Numbers 31:17-18 which has Moses very upset with the Israelite army for not committing genocide against a recently defeated neighbor. When he saw that they had not slaughtered all the little boys and women he ordered them to ” kill every male among the little ones, and kill every woman that hath known man by lying with him. But all the women children, that have not known a man by lying with him, keep alive for yourselves.” The sex-slaves/virgin “women children” the Hebrews/Jews kept alive for themselves was 32,000 according to verse 35!

Not only are these Hebrew Bible/Old Testament teachings an assault on Gentiles and our children, they are an assault on the character and goodness of God. Only a very sick and ungodly mind could attempt to put these words and commands in the mouth of God/The Supreme Intelligence. The American revolutionary, founder and Deist, Thomas Paine, addressed this serious and damaging problem when he wrote in his very important and thought provoking book, The Age of Reason, The Complete Edition (for Kindle click here), “Had the cruel and murderous orders with which the Bible is filled, and the numberless torturing executions of men, women and children, inconsequence of those orders, been ascribed to some friend whose memory you revered, you would have glowed with satisfaction at detecting the falsehood of the charge, and gloried in defending his injured fame. Is it because ye are sunk in the cruelty of superstition, or feel no interest in the honor of your Creator, that ye listen to the horrid tales of the Bible, or hear them with callous indifference?”

In The Slave Trade by Hugh Thomas we read that “in Visigothic Spain, Jewish merchants were prominent among those providing slaves for sale – Celts or Suevi, no doubt – until the rising tide of anti-Semitism in the seventh century restricted their activity.”

Christianity, which also sprang from Jewish superstitions grounded in the Hebrew Bible/Old Testament, not only promotes Communism, but it also promotes slavery and teaches people who are slaves to “be obedient to them that are your masters according to the flesh, with fear and trembling, in singleness of your heart, as unto Christ” (Ephesians 6:5) while 1 Peter 2:18 teaches people who are being held and owned as slaves to “be subject to your masters with all fear; not only to the good and gentle, but also to the froward.” What a sick, twisted and ungodly mindset! I much prefer this worldview and mindset expressed by the Deist Thomas Jefferson who wrote regarding the Fourth of July celebration of the American Revolution that he hoped it would be “the signal of arousing men to burst the chains under which monkish ignorance and superstition had persuaded them to bind themselves, and to assume the blessings and security of self-government.”

(In the last article I wrote I mistakenly had things set so people could not leave their comments. I apologize and I believe I’ve corrected it in the settings for this article.) 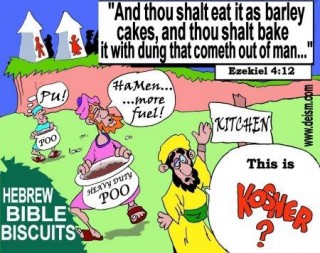