McCain says “Russia is a gas station masquerading as a country”

[ Editor’s Note:  McCain should lay off the cute lines as he is the most vulnerable loon punching bag on the planet right now, a gift from the gods to all writers and editors.  “Gas bag McCain” came instantly to my mind when reading about his latest theatrics.

Next would be “John McCain continues masquerading as member of the esteemed US Senate.” You all know what I am going to say next. “You just can’t make this stuff up!”

Isn’t one of the duties of a loyal wife…to shoot their husbands when they start doing stuff like this, to put them out of their misery and save whatever legacy they might have left? Have times changed that much or did they make that illegal?

I suggest it is time for VT people to flood both his DC and Arizona offices with calls to let them know what a disgrace he has become to us all, or always has been. Do not be impolite to the poor staff people. You might even sympathize with them for having to work for such a person every day and offer your free suicide hotline services to them if they ever feel the urge.

The next step would be to call the AZ state Republican Party and some of the major newspaper editors and ask them on the record about his lone-man diplomacy with Al Qaeda and other Muslim terrorists, and now expanding into the Ne0-Nazi arena.

Let them know you would be an out of state volunteer for a recall effort. It’s the least we can do to make him the laughing stock he deserves, as he sure as hell is doing it to us… Jim W. Dean ]

US  Senator John ‘McQaeda’ McCain (R-Arizona) has called for tough economic sanctions against Moscow, saying the Russian economy is only dependent upon oil and gas.

“Russia is a gas station masquerading as a country,” McCain said on CNN’s “State of the Union” on Sunday after he flew back to the US from a two-day trip to Ukraine.

“It’s kleptocracy, it’s corruption, it’s a nation that’s really only dependent upon oil and gas for their economy,” he added.

The already simmering tensions between Washington and Moscow intensified on Sunday after people in the Autonomous Republic of Crimea overwhelming voted in a referendum in favor of breaking away from Ukraine and rejoining Russia.

US President Barack Obama was quick to pick up the phone and call his Russian counterpart Vladimir Putin to say the referendum “would never be recognized by the United States” and “we are prepared to impose additional costs on Russia.”

A delegation of eight US senators who spent the weekend in Ukraine also called for tough economic sanctions against Russia and a package of aid for Ukraine.

However, legislation imposing sanctions against Russia and granting financial assistance to Ukraine has stalled in Congress over a provision to the Senate bill which calls “for an increase in the U.S. quota in the International Monetary Fund (IMF).” 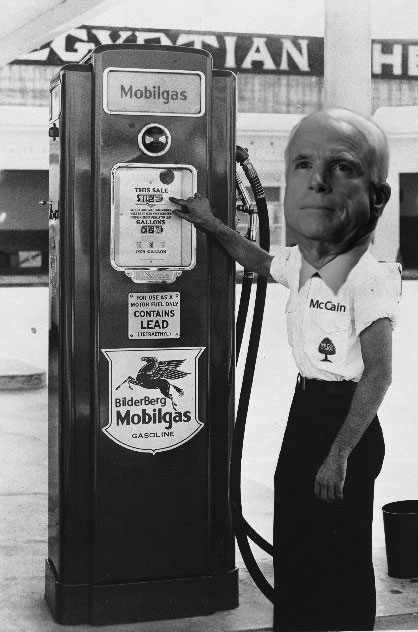 Republicans in the House of Representatives have said they would not vote for the Senate bill, which was approved by a 14-3 Senate Foreign Relations Committee vote on Wednesday, even if it passes the upper chamber on Capitol Hill.

Discussions in Congress over calls from McCain and the rest of the US delegation to Ukraine for economic sanctions against Russia would be delayed for at least one week as US lawmakers left Washington this week for their one-week recess.

While in Ukraine, McCain, who lost the 2008 presidential election to Obama, also called on Obama to send arms and other military equipment to Ukraine, saying if he were the president he would have already done that.

During his Sunday’s interview with CNN, McCain once again criticized Obama by referring to his leaked remarks during a conversation with former Russian President Dmitry Medvedev in South Korea in 2012 when he was caught on an open microphone, saying he would show more flexibility to Russia after his reelection.

Washington has to “have a fundamental reassessment of our relationship with Vladimir Putin,” he said. “No more reset buttons, no more ‘Tell Vladimir I’ll be more flexible.’”