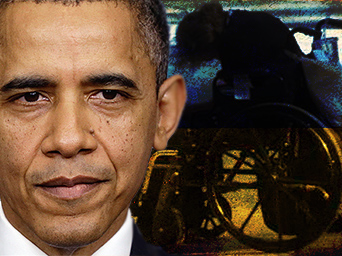 LOS ANGELES – If President Barack Obama was as assertive at protecting the property rights of the Los Angeles National Veterans Home as he is at protecting the borders of Ukraine, we wouldn’t have 20,000 war-injured and impoverished U.S. Military Veterans living homeless and hungry in America’s capital for homeless Veterans.

On March 2, 1887 at the Forty-Ninth Congress, a Congressional Act was approved … “To locate, establish, construct, and permanently maintain a branch of said National Home for Disabled Volunteer Soldiers to be located at such place in the States west of the Rocky Mountains … to appear most desirable and advantageous.”

Section 2 of the Act Declared: “That all honorably discharged soldiers and sailors who served in the regular and volunteer forces of the United States, and who are disabled by disease, wounds, or otherwise, and who have no adequate means of support, and by reason of such disability are incapable of earning their living, shall be entitled to be admitted to said home for disabled volunteer soldiers.”

It is evidenced by the language of this 1887 Act of Congress that the entrusted public servants who authored it had clearly mandated that there should never be a “homeless Veteran” in Southern California because this was to be permanently maintained as their rightful Home.

On March 5, 1888, 600 acres of private and pristine land in West Los Angeles were exclusively deeded to the United States Government as stipulated in the 1887 Act of Congress. This benevolent land gift on behalf of America’s disabled and homeless Veterans is an irrevocable charitable trust.

However, today these sacred grounds have been pillaged, plundered and prostituted with 388 acres remaining and one-third of that is for non-Veteran use. Meanwhile, tens of thousands of disabled and disadvantaged homeless Veterans have been exiled and forced to live on Skid Row while struggling to survive on the crime-ridden streets of Los Angeles.

On June 8, 2011, the American Civil Liberties Union of Southern California (ACLU) filed a lawsuit against Eric K. Shinseki, Secretary of the Department of Veterans Affairs (VA), and Donna Beiter, his executive director at the Los Angeles VA for the misappropriation of this exclusive land.

Instead of settling the lawsuit and honoring the Congressional Act of 1887 and legal Deed of 1888, President Obama’s Department of Justice (DOJ) aggressively fought the lawsuit on behalf of the two Defendants.

On August 29, 2013, U.S. District Judge S. James Otero entered a Federal Judgment against Defendants Shinseki and Beiter for engaging in nine real estate dealings that were “unauthorized by law, and therefore void.”

Instead of honoring the Judgment and evicting the nine illegal occupants, President Obama’s DOJ filed an Appeal on behalf of the two Defendants at the added expense to the American Taxpayer and to the prolonged misery and suffering of tens of thousands of homeless Veterans.

And if this Russian-Ukraine fiasco escalates to possible war, who will pay the price other than America’s men and women of our Armed Forces putting their lives in harm’s way for the protection of another nation’s borders and citizenry.

On the other hand, what has transpired at the Los Angeles National Veterans Home has culminated into the biggest and most corrupt land-fraud scandal in American history compounded by some of the most heinous crimes against humanity that were ever perpetrated on American soil — against tens of thousands of innocent homeless, helpless and needy Veterans.

Instead of President Obama and Congress evicting all of the illegal occupiers on Veterans’ property and building a new and modern National Veterans Home, U.S. Secretary of State John Kerry recently traveled to Ukraine to show them our government’s support with a $1 billion “federal aid package” to help the embattled country.

In an extremely disproportionate expression of priority and gratitude, U.S. Congressman Henry Waxman and U.S. Senator Dianne Feinstein appropriated a paltry $20 million to patch-up a vacant 70-year old rat-infested building on VA property that will eventually house a total of 65 formerly homeless Veterans.

Did I mention there are 20,000 homeless Veterans in Los Angeles?

In fact, by the VA’s own admission, nearly half – 47% – of all homeless Veterans today are of the Vietnam War.

Vietnam Veterans of America (VVA) is a Plaintiff in the ACLU lawsuit, yet the Obama Administration is vigorously fighting it while Secretary Shinseki incredulously crows about ending Veteran homelessness by next year.

John Rowan, National President of Plaintiff VVA has underscored a very sobering reminder: “Astoundingly, the number of Vietnam Veterans who are homeless today is greater than the number of U.S. service members who died during the War. These Veterans are elderly, frail and in declining health and are being forced to live in deplorable circumstances. Make no mistake, VVA is fully committed to ending these inhumane living conditions by ensuring that our fellow Veterans get the quality housing and care they need and deserve.”

On May 28, 2012, Memorial Day, President Obama made a promise at the Vietnam War Memorial in Washington, D.C. “One of the most painful chapters in our history was Vietnam — most particularly, how we treated our troops who served there. You were often blamed for a war you didn’t start, when you should have been commended for serving your country with valor. You were sometimes blamed for misdeeds of a few, when the honorable service of the many should have been praised. You came home and sometimes were denigrated, when you should have been celebrated. It was a national shame, a disgrace that should have never happened. And that’s why here today we resolve that it will not happen again.”

During his 2012 re-election campaign, President Obama made this promise in a television advertisement: “The sacrifices that our troops have made have been incredible and it’s because of what the troops have done, we’ve been able to go after al-Qaida and kill bin Laden. And when they come home, we have a sacred trust to make sure that we are doing everything we can to heal all of their wounds, giving them the opportunities that they deserve to find a job and get the education that they need. It’s not enough just to make a speech about how much we value veterans. It’s not enough just to remember them on Memorial Day.”

During a 2012 campaign rally at Virginia Commonwealth University, President Obama proclaimed: “And as long as I’m Commander-in-Chief, this country will care for our veterans and serve our veterans as well as they’ve served us … because nobody who serves … nobody who fights for this country … should have to fight for a job or a roof over their heads when they come back home.”

Did I mention there are 20,000 homeless Veterans in Los Angeles and nearly half are of the Vietnam War, that their National Home has been pillaged and plundered for non-Veteran use, that VA Secretary Shinseki and his fellow Defendant Donna Beiter have a Federal Judgment against them for illegal use of Veterans land, that the Obama Administration has Appealed the Judgment, and that the Obama Administration has arranged a $1 billion foreign aid package for Ukraine’s government?

Mr. President, it’s time to start focusing on issues here at home and to honor your promises of ending Veteran homelessness by bringing our disabled and disadvantaged Veterans to their rightful National Veterans Home.

Instead of negotiating over Treaties with foreign nations, the Old Veterans Guard respectfully requests that you take a leadership role along with members of Congress and honor the following Veterans Treaty with the Los Angeles National Veterans Home and our own United States Government.

On behalf of all disabled, disadvantaged and homeless Veterans