Home Government Time To Target The Worst Villains of All 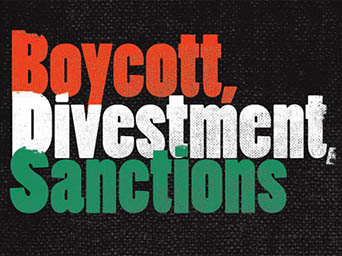 BDS must expose our MPs’ unnatural devotion to a foreign power that practises apartheid, defies international law and terrorises children

Last week David Cameron, addressing Israel’s Knesset, pledged to defeat any boycotting of Israel. “Britain opposes boycotts,” he said without having consulted the British people on the matter.

This should be enough to put the international BDS movement (Boycott, Divestment and Sanctions) and the PSC (Palestine Solidarity Campaign) on a war footing. But when a friend suggested to one of the PSC’s senior people that next year’s general election candidates who had joined Friends of Israel should be named and shamed, he got a sniffy response. Being a Friend of Israel, he was told, “is not a totally reliable indicator of where people stand”.

There’s no doubt where the ringleaders stand, though. Their words and actions make it perfectly clear. And with electioneering already in full swing, now would be a good time to target them. Cameron and his lieutenant William Hague have provided abundant amunition, here for example http://www.redressonline.com/2014/03/anger-as-cameron-superglues-uk-to-israel/ , to mount a devastating campaign exposing their unnatural devotion to a foreign military power that practises apartheid and treats international law with contempt.

The pair are currently drumming up sanctions against Russia after the citizens of Crimea, exercising their right of self-determination, upset the West’s apple-cart by voting to rejoin ‘the Bear’.  On the Foreign Office website Hague whined: “We are witnessing a clear attempt to pave the way for the annexation of part of the sovereign territory of an independent European state, through military force and an illegal and illegitimate referendum.” Yet he and Cameron continue rewarding Israel for annexing Jerusalem, large parts of the West Bank, the Golan Heights and Gaza’s airspace and territorial waters, at gunpoint and all without a referendum of any kind.

Hilarious Cameron was saying yesterday: “It is completely unacceptable for Russia to use force to change borders on the basis of a sham referendum held at the barrel of a Russian gun. President Putin should be in no doubt that Russia will face more serious consequences.”

Hague, speaking in the House of Commons, praised the Ukrainians for their restraint in the face of “immense provocation, with part of their country invaded and tens of thousands of forces massed on their border by a neighbour that refuses to rule out further intervention against them.” He called it a land-grab with no respect for international law.

Cameron was asked by Paul Flynn if, while in Israel last week, he had discussed the possibility of Israel disposing of its nuclear weapons capability and joining the Nuclear Non-Proliferation Treaty. Cameron replied: “I did not discuss this issue during my recent visit to Israel. The Government consistently call on Israel to join the Nuclear Non-Proliferation Treaty as a non-nuclear weapon state  [my emphasis] and to agree a full scope Comprehensive Safeguards Agreement with the International Atomic Energy Agency.“

The irony of it all is completely lost on our Zionic duo.

The evil machinations which sustain the Israeli regime and cause the Palestinians and others endless grief  are the work of schemers in London and Washington. The main fight is therefore on our own doorstep against the enemy within. And activists look to the PSC for co-ordination and leadership. But will the campaign body rise to the challenge and directly confront the politicians who, in our name, pledge “rock solid” support for Israel while ignoring the regime’s  mega-crimes?

The book they boycotted

The PSC are very good at politely lobbying Parliament. It doesn’t rock the boat too much, but nor has it achieved much. The plight of the Palestinians goes from bad to worse.  Maybe the nice folks at PSC are too close to the Westminster bubble to play hard-ball.

Members who are not quite angry enough to ‘up the ante’ and make waves should see this excellent Australian video http://www.redressonline.com/2014/03/australian-tv-dares-to-show-the-real-israeli-occupation/  showing how Israel  terrorises, abuses and tortures children. It’s 45 minutes, it’s hard to watch, but force yourself. If you weren’t incandescent before, you will be now.

The video needs to be set alongside Cameron’s suck-up remarks to the Knesset:

“Proud to be pursuing the strongest and deepest possible relationship between our two countries….”

“With me, you have a British Prime Minister whose belief in Israel is unbreakable and whose commitment to Israel’s security will always be rock solid…. ”

“When I became Prime Minister I legislated to change it [the law on universal jurisdiction]. My country is open to you [war criminals]. And you are welcome to visit anytime [yes, including those responsible for abusing and torturing children].”

That speech surely hits an all-time low in the annals of craven servility.

All Conservative MPs and would-be MPs ought to be shown the video. Then they should shut themselves in a darkened room and weep, like many of us wept who have seen the cruelty first-hand or heard testimony from Palestinian youngsters direct. And they should reflect on what a rotten thing it is that 80% of their colleagues (allegedly) have placed themselves under the influence of the Israeli government and its lobby and signed up as Friends of Israel in open breach of the key principles that govern conduct in public life.

My own experience with the PSC is not a happy one. A few years ago their head office declined to give my book ‘Radio Free Palestine’ a mention. Copies sent them for review “went missing” one after another. Later, when I set up a website where everyone could read it for free, PSC again chose to ignore it. So while I admire the positive work of the many dedicated people in the local branches, I steer well clear of PSC Central.

I’ve heard PSC members lament that their organisation has been infiltrated by Zios. So? Identify and eject them – that’s if the PSC are to play a decisive part in the next phase of the struggle.

In the coming months will the combined BDS movement strike at Westminster’s writhing snake pit?

And the book the PSC boycotted? Here it is http://www.radiofreepalestine.org.uk/.  Jeff Halper kindly wrote the Foreword.