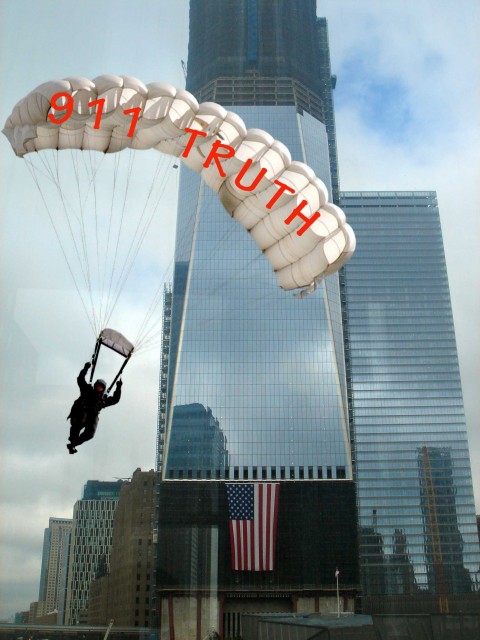 In an apparent protest against the Orwellian police state unleashed by the 9/11 inside job, four patriotic paratroopers decided to “chute Larry Silverstein” – by jumping off the top of the Unfreedom Tower.

The amazing “freedom jump” occurred last September 30th. Despite the NSA’s all-seeing Illuminati Eye of Sauron that winked open on 9/11/2001, the four liberty-loving protesters managed to gain access to the Unfreedom Tower’s roof, strap on their chutes, leap off the building, glide safely to earth, and evade arrest for six months. When the NSA, CIA, DHS, FBI, NYPD, IRS and FCC finally caught up with them and dragged them into court late last night, the “leaping liberty lovers” were charged with felony third-degree burglary, reckless endangerment and jumping from a structure.

The time it took the parachutists to float to earth – about two minutes – was roughly the time it would have taken the Towers to undergo a sagging, twisting, metal-distorting sideways-toppling partial collapse, which is the only kind of collapse possible from natural causes. Only by removing all vertical supports on each floor simultaneously in a precisely-timed sequence can a steel-framed skyscraper be made to implode symmetrically; if the timing is off by a fraction of a second, the building will topple sideways following the path of least resistance.

The symmetrical, straight-down explosive destruction of the Twin Towers in about ten seconds each – and the 6.5 second symmetrical implosion of World Trade Center 7 later that afternoon – were obvious controlled demolitions.

The Unfreedom Tower freedom jump is the second apparent 9/11 protest by Daredevil Aerialists For Truth (DAFT). In an earlier incident, the lovely Seanna Sharpe protested the cover-up of the arrest of Israeli terrorists trying to blow up New York’s bridges and tunnels on 9/11 by doing an aerial “dance of the seven veils” on the Williamsburg Bridge.