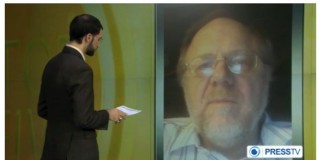 Saudi Arabia is financing and arming lunatic militants to fight for the overthrow of the government of Syrian President Bashar al-Assad, an analyst tells Press TV.

“The Saudis are trying to throw money and weapons at all of these people, mainly at the lunatics hoping that they will go and overthrow somebody else’s government over in Syria,” Kevin Barrett said in an interview with Press TV on Wednesday.

He added that the Saudi regime has requested the Western governments to “hand over large numbers of shoulder-fired anti-aircraft missiles to these [militant] groups in Syria.”

Barrett, however, noted that the West is likely to “reject this ridiculous call from the Saudis for advanced arms for the militants” and would prefer political solution to the crisis in Syria.

“If there is one autocracy in the Middle East that is crying out for regime change, it is Saudi Arabia,” said Barrett.

He recommended that the Saudi monarchy “radically reconsider its course” and “stop trying to bloodily overthrow neighboring governments.”

In letters to UN Secretary General Ban Ki-moon and President of the UN Security Council Sylvie Lucas, the Syrian Foreign Ministry said Riyadh is still fanning the flames of turmoil in Syria.

Syria has also pledged to provide the UN Security Council with the identity of nearly 230 Saudi militants killed during conflict in the country.

Damascus wants the UN to pressure Saudi Arabia to give up support for terrorism.