Home Veterans The Real Vampires: An Insider’s View of Banks 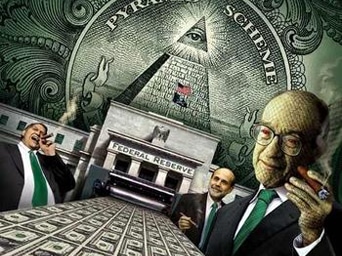 The Inside Scoop from Bill Clinton’s Mentor 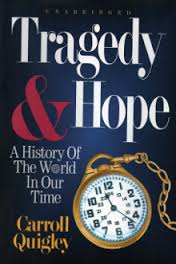 Tragedy and Hope: A History of the World in Our Time by Carroll Quigley* (1966 Macmillan) is an exacting account of how the Bank of England, the Federal Reserve, the European central banks, and the giant investment banks that dominate them (e.g. Goldman Sachs and JP Morgan) came to control all western governments.

According to Quigley, banks have controlled western society – by manipulating the money supply – since the creation of the Bank of England and the fractional reserve lending system in 1694. Moreover, owing to the secrecy under which they operate, Quigley asserts that most elected officials are totally unaware of the immense control central and investment banks exert over the so-called democratic process.

He describes in exhaustive detail how all historical inflationary and deflationary crises, panics, wars, recessions and depressions were orchestrated behind the scenes by the banking establishment, for the purpose of increasing their private wealth. In his epic portrayal of three centuries of western civilization, he also describes how the banking aristocracy financed the rise of Communism in Russia, China and Eastern Europe, as well as bringing Hitler, Mussolini, Stalin and Roosevelt to power and guiding their governments from behind the scenes.

How Banks Create Money “Out of Nothing”

The single act, according to Quigley, that guaranteed Britain’s two century preeminence over the rest of the world was the development (in 1694), by British investment banks, of the fractional reserve lending system. This system allowed English investment banks to be the first in the world to lend money (to industry and the British government) that they created out of thin air. He goes on to list the banking dynasties that have held near absolute control of the global money supply since 1694, starting with banking cartel formed by Frankfurt banker Meyer Rothschild. At the time of his death, Rothschild’s five sons each controlled a major investment bank in Vienna, London, Naples, Paris and Frankfurt. Quigley lists the investment bank formed by the J.P. Morgan family as second to the Rothschild banks in power and influence, followed by the Baring Brothers, Morgan Grenfell, the Lazard Brothers, Erlanger, Warbur, Shroder, Seligman, the Speyers, Mirabaud, Mallet and Fould.

The Council on Foreign Relations

Quigley also writes about the network of secret round tables of international corporate and banking elites started by Cecil Rhodes and expanded by his followers with his sizable estate. At their founding, they had the stated purpose of spreading British the virtues of “ruling class” tradition throughout the English speaking world and solidifying the political power and influence of the British Empire. The US Council on Foreign Relations, one of the secret round tables started by Rhodes’ followers, was started in 1919, with the explicit goal of influencing the foreign and domestic policies of a former colony over which Britain no longer had direct control.

How English Banks Controlled the US Government

According to Quigley, the US was consistently a debtor nation prior to World War I. Following the 1776 revolution, US government and businesses continued to borrow funding for industrial and colonial expansion from English and European investment banks. The American banker, JP Morgan, collaborated with European investment banks to dictate US foreign and domestic policy. They did so by threatening to destroy the US economy by 1) refusing to renew treasury bonds (i.e. money the government borrowed from banks to fund public spending 2) causing a panic by throwing large numbers of shares on the stock market or 3) destroying the value of railroads and other companies the banks owned by loading them up with worthless assets.

As Quigley relates, they engaged in all three tactics at various times throughout the 19th century, resulting in a series of booms, panics, recessions and depressions that wreaked havoc on American economic development.

How Bankers Engineered, World War I, Bolshevism, Nazism and the Great Depression

The most disturbing section of Tragedy and Hope describes how international bankers engineered (he describes their secret meetings) World War I and what Quigley calls the Banker-Engendered Deflationary Crisis of 1927-40 (aka the Great Depression). Following the 1870 unification under Bismarck, Germany experienced a rapid burst of industrialization, generating sufficient profit that they ceased to rely on investment banks to finance either business or government. They also threatened global bankers by competing with England and other European countries for export markets.

While engineering the first world war to put Germany in her place, the world banking cabal simultaneously hatched a scheme to destabilize Russia (which was making claims on Balkan members of the former Ottoman Empire) by secretly funding the Bolsheviks and other Russian revolutionaries.

Financing Hitler and the Nazis

When the the first world war ended in 1918, public debt in Western Europe and the US had increased by 1000%. In 1929, the austerity measures global banks forced on the US, England, France and other European countries led to widespread bankruptcies and unemployment and the virtual collapse of foreign trade.

Tragedy and Hope is a free download from http://www.carrollquigley.net/pdf/Tragedy_and_Hope.pdf