Home Life £50 For An Audience With Israeli ‘Justice’ Minister On War Crimes Wanted... 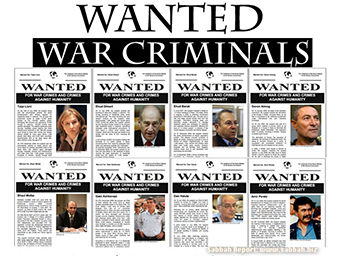 You couldn’t make it up!

…and basking under the special protection of Her Majesty’s Government

In 2009 Livni cancelled a visit to London when she discovered an arrest warrant had been issued against her, along with Ehud Barak and retired general Doron Almog, on the grounds that she had been a member of the Israeli war cabinet which organised the slaughter of more than a 1400 Palestinians. And in 2011 she was given a rare diplomatic passport by the UK Government to protect her from further risk of arrest and prosecution.

People are now being invited to pay £50 for an “audience” with this appalling woman at a provocative meeting of the Jewish National Fund (JNF) to be held at a secret central London venue on 15th May. UCU Scotland Congress has called on Home Secretary Theresa May to refuse Livni entry to the UK.

It’s provocative because 15th May is Nakba (Catastrophe) Day, when Palestinians remember the Zionist blitz of ethnic cleansing in 1948 immediately before and after Israel declared statehood on 14th May. 750,000 Palestinians were driven from the homes and farmlands by Jewish terror gangs and Israeli militia creating the world’s largest refugee population. Others were massacred in the process. During 1947-50 the JNF is said to have provided information to Zionist militia to facilitate the murder and expulsion of Palestinians.

StopTheJNF are urging a letter-writing campaign to MPs asking them to request the Home Secretary to block Livni’s visit, which they say is an incitement to hatred. They explain that the JNF is a Zionist organisation established in 1901 for the purpose of obtaining Palestinian land for the sole use of Jewish settlers and excluding Palestinians from their own lands. It has obliterated pre-1948 Arab villages by planting forests and parks. JNF UK, believe it or not, enjoys charitable status. Tony Blair and Gordon Brown are honorary patrons, so was Agent Cameron until he removed himself from the shameful list, under pressure it is claimed. Brown said Livni was “most welcome in Britain any time”.

Tzipi Livni is accused of war crimes because of her role in the indiscriminate bombing of Palestinians in Gaza during Operation Cast Lead. For her to speak at an event hosted by an organisation implicated in the ethnic cleansing of Palestine on a day when the world is remembering the victims of that heinous act, would be a racist provocation, say StopTheJNF.

The Home Secretary recently barred Dieudonné, the French comedian who does the Dr Strangelove salute that’s now claimed to be antisemitic. He has been in all kinds of trouble for allegedly inciting racial hatred, but he’s a harmless pussycat compared to the bloodsoaked Livni.

Tzipi Livni, amusingly described as Justice Minister and Chief Peace Negotiator, is no ordinary hatemonger. She’s an A-list Zio-psychopath steeped in terror and violence. Her father Eitan and her mother were both prominent members of the Irgun, the terrorist outfit that bombed the King David Hotel, the headquarters of the British Mandatory Government, in 1946 killing 91. She also served in Mossad, Israel’s intelligence and assassination agency.

Livni, as Israel’s Foreign Minister, was up to her pretty neck in the slaughter inflicted by Operation Cast Lead on Gaza. She has shown no remorse. And when over 1,400 Gazans (including 320 children and 109 women) had been shredded, mangled and incinerated, and thousands more horribly maimed, her office issued a statement saying she was proud of the operation. Speaking at a conference at Tel Aviv’s Institute for Security Studies, she said: ”I would today take the same decisions.”

The Fourth Geneva Convention is supposed to protect civilians under military occupation…. no violence to life or person, no cruelty or torture; no taking of hostages; no outrages upon personal dignity; no collective punishment, no sentencing or executions unless ordered by a properly constituted court affording all the judicial guarantees demanded by civilised peoples.

In the wake of Israel’s 22-day devastation of Gaza and wholesale murder of its civilians the Zionist regime not only blocked humanitarian and reconstruction aid but also denied access to teams investigating allegations of war crimes.

Former UN Special Rapporteur Professor Richard Falk put the ongoing war crimes problem quite simply when he said: “The idea of Nuremberg after World War 2 was that crimes against the peace, crimes against humanity and war crimes are also offences against the whole of international society”. The law that was applied to surviving German criminals of WW2 wouldn’t be respected unless those who sat in judgment upheld it in relation to their own behaviour.

“Universal jurisdiction is part of the struggle against impunity for the Israeli military and the country’s political leaders,” said Falk. Israel enjoyed impunity because it didn’t call those who violated international criminal law to account and because the US, and to some extent EU, had insulated Israel from its responsibilities as a sovereign state.

The UN’s Goldstone report and the international law panel appointed after the Gaza flotilla incident also raised the issues of impunity and accountability. Falk feels that the most effective way of implementing international law is now through the activism of civil society and through national legal institutions.

Universal Jurisdiction is – or was – a good tool for the job. A private individual could apply to a magistrate for an arrest warrant if he had serious evidence. The Attorney General’s consent was needed for the prosecution to go ahead, but even if that consent was withheld the magistrate might still issue a warrant if he considered there were reasonable grounds for suspecting a war crime had been committed and admissible evidence established this.

The bringing of a private prosecution for a criminal offence is an ancient right in common law and, in the words of Lord Wilberforce, “a valuable constitutional safeguard against inertia or partiality on the part of the authority.” And the beauty of the private warrant is that it can be issued speedily. Lord Diplock, another respected Lord of Appeal, called it “a useful safeguard against capricious, corrupt or biased failure or refusal of those authorities to prosecute offenders against the criminal law”.

And that’s precisely what we’re up against – a capricious, corrupt and biased administration that wants to let ‘friendly’ war criminals off and protect them from arrest while they visit Britain. The government argued that foreign politicians, no matter how blood-soaked, should never be made to feel unwelcome and that the Law of Universal Jurisdiction impeded Britain’s ability to use its diplomatic powers. So the law has been changed for the benefit of Livni and her gruesome colleagues. Now the Director of Public Prosecutions will consider each application at the arrest warrant stage. This of course means political interference and delay, enabling suspects to slip away thanks to the very “inertia and partiality” Wilberforce warned about.

The principle that no-one, regardless of nationality, should feel able to commit war crimes with impunity, has been jettisoned so that the likes of a former Israeli foreign minister who was responsible for the murderous assault on Gaza’s civilians in 2008/9 – and all the other Israeli thugs for that matter – need no longer fear arrest if they come here.

If a country like Britain, with its proud constitutional tradition, applies international criminal law only to those it doesn’t happen to like at the time, such as Saddam Hussein, Slobodan Milosevic or Syria’s Assad, the rule of law which depends on equals being treated equally is utterly discredited. “Double standards become very manifest; it also has the effect of saying that geopolitics and foreign policy always trump the law,” observed Falk.

The UK, like all other countries that think themselves civilised, is under a solemn obligation to seek out those suspected of having committed grave breaches of the Conventions and bring them, regardless of nationality, to justice. In other words, there should be no hiding place for the world’s vilest criminals.

Over to Mrs May. Does the Home Secretary really see Tzipi Livni as less hateful, less disgusting than Dieudonné? Let’s see if she has the integrity, if not the balls, to tell Livni her ‘special protection’ passport is revoked and to steer well clear of the UK or face arrest and be carted off the The Hague.