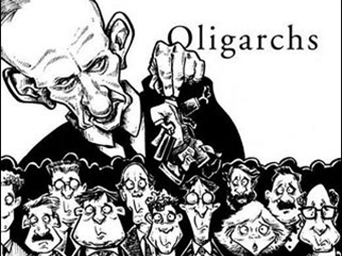 Contrary to Professor Robert Reich, America is already an Oligarchy and is moving fast toward Monarchy. The shameful and degrading events in Last Vegas last week, is an insult to every American voter and to America.

They came to Las Vegas, Jeb Bush, Chris Christie, Scott Walker, John Kasich, crawling on their hands and knees, prostrating as they enter the King’s Court, kissing his ring certainly his “behind” in a bid to win his financial support as they seek the highest office in the land. What a disgusting shameful way to win the White House.

Sheldon Adelson, the King of Las Vegas and Macau, a Jewish die hard Zionist billionaires worth some $37 billions made from selling ‘dreams” to fools who believe they can win against the house, a man who made his money from gambling and all the other “activities” that comes with it.

The man does not care one bit about America; he only cares about Israel, where his heart, his money and loyalty lie. He contributed over $100 millions to an American/Israeli campaign to lure young Jews to Israel called “Birthright” that instill loyalty to Israel in the hearts and minds of young American Jews. America was never on his radar screen or at his roulette table.

This is the man who wasted some $16 millions sponsoring a pseudo intellectual creep called Newt Gingrich and when Gingrich ran out of “hot air and bullshit”, Adelson decided to pour $30 millions in Mitt Romney’s campaign. Barack Obama was not good enough for Israel. He proved to be the “Israeli President”.

However Sheldon Adelson is not alone in this game. The Koch Brothers, David H. and Charles G also poured hundreds of millions in political campaigns, funding “conservative “ issues and giving birth to the Tea Party.

The Koch Brothers donated some $196 millions to campaign against universal health care, and climate change. The Koch Brothers invested tens of millions in think tanks such as Cato Institute, Heritage Foundation, American for Prosperity and of course the Tea Party.

Investing and pouring tens of millions to reverse established legislation to support their political ideas and what they perceive as “free enterprise” an economic and capitalist systems that is taking American down the drain just like “Social Communism” took the Soviet Union to oblivion.

Think twice next time you use their toilet paper (Quilted Northern) or (Dixie) paper plates or (Vanity Fair) liquid soap.

Thanks to our “Supreme Court” that allowed these Oligarchs to hijack our political and democratic system of government of “we the people” and turn it into “we the corporation” when it ruled in Citizens United that corporations and America’s Oligarchs can have their own primaries.

Justice Kennedy seems unaware of the relationship between corruption and money stated, ““We now conclude that independent expenditures, including those made by corporations, do not give rise to corruption or the appearance of corruption.” Perhaps he needs to make a visit to the backrooms of American politics and see that money and access is every thing in America and corrupting it very badly.

Our own illustrious Supreme Court justices one more time awarded these Oligarchs another victory, when today ( April 2, 2014) the Supreme Court in McGuntheon vs. Federal Election Commission by 5-4 decision struck down limits on campaign contribution by corporations. Now single donors can contribute millions if not hundreds of millions to political parties, political candidates and political action committees.

Ah well, now we know what we the citizens and voters are worth, nothing. Our job now is every two or four years, line up as idiots and fools and vote in the Oligarch’s candidates.

One would think that in “democratic America” potential political candidates would go directly to the people, to their constituents to seek their input and to sound off their ideas and chances for winning elections, not go to Las Vegas and kneel before someone like Sheldon Adelson, the King of American politics.

No need for us to spend hundred of millions of dollars promoting democracy overseas teaching “natives” democracy when we need to rethink our democracy and go back to the basic, government of the people, by the people and for the people, not a government for the Oligarchs and by the Oligarchs. Time to rewrite the rules on America’s shameful democracy.

It seems that once again Congress is declaring war on American and the American people. Congressman Paul Ryan decided to submit a Federal budget that rather than enforce the laws on American corporations cheating on taxes denying the Treasury trillions of dollars, he and his Republicans decided to take on the poor, reducing retirements benefits, reducing medical benefits, reducing funding for scholarship, reducing food stamps to the poor.

Why not! Having wasted $ 4 trillions on criminal wars , wasted $ one trillion bailing out crooks and thieves of Wall Street, and having waged relentless wars on homeowners, Congress wants to balance the budgets from the pockets of the poor, those millions who barely could afford to pay rent or buy food. America’s Oligarchy at its best.

True, we are a nation moving more and more toward “monarchy” with “vacant” house and senate seats going to spouses or children, when the White House is going to a Kennedy, to a Clinton, to a Bush.

Is this what America is all about? Next election let us see if it is our votes or “their” money that elect our representatives and win. By the way, we know the Supreme Court ruled against “term limits” but that does not mean we as voters can’t enforce “term limits”. We may not be able to over turn the Supreme Court ruling but we sure can defeat it at the voting polls. See you at the polls.