Home Life America: Are We a Nation of Crooks? 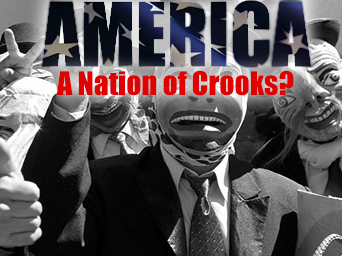 Of course not, but the late Richard Nixon was not the only crook. There are tens of thousands of politicians, certainly members of Congress, federal regulators, lobbyist, banking and financial executives, doctors, lawyers, chief executive officers, and board members of major US corporations who shamefully join Nixon as inductees in the shameful “American Crooks Club”.

Over the years, Wall Street and its executives, both corporate and legal in collusion with federal regulators, members of Congress, certainly Republican and Democratic administrations have cheated hundreds of millions of decent hard working Americans looting their pensions and life time savings and through reckless legislation millions of Americans lost their jobs and hundreds of Trillions disappeared over the years since Wall Street and the Feds took control of the nation financial and fiscal policies.

Congress, Republicans and Democrats, has consistently failed the nation and the people by allowing “lobbyists” to write tax codes and draft financial legislation, waiving its constitutional duties to represent the people and now the last remaining hope for the people, the Supreme Court joined the club.

According to the 2013 Congressional Research Service Report offshore tax shelters costs the national treasury between $30 billions to $60 billions a years in lost revenues. States are also getting cheated to the tune of $20 billions a year according to the US Public Interest Research Group, with corporate America stashing a staggering $1.95 Trillions in tax havens depriving tens of millions of Americans of jobs.

Bloomberg estimated that Apple, IBM, GE, Pfizer, Microsoft stashed some $206 billions offshore, with International Business Times claiming that for every dollars spent in the US, $3 are stashed overseas. One can only imagine if only half or one forth of this amount is invested in America creating jobs for perhaps one of the best labor force in the world.

Rather than going to jail, Wall Street executives were bailed out by us, the taxpayers, we bailed them out of their fraud, lies and cheating. Rather than making all those people they cheated whole, Wall Street went out and paid Wall Street lawyers over $100 Billions in legal fees. This is in addition to the $100 billions they paid in penalties with no direct benefits to those who lost their homes or lifetime savings.

Just imagine what these $200 billions could have done for the 1.4 homes lost to foreclosure and the more than 1.5 million Americans over 50 who lost their homes and lifetime savings with 3.5 million homeowners owing more than the houses are worth. The government, rather than force these financial crooks to reach a settlement with the millions of people who lost their homes, the government allow these crooks to spend $100 billions fighting the very people they cheated.

– The board of directors of Heinz Food awarded the former CEO a bonus of $110.5 millions for his last 8 months in office as a reward for his efforts and decision in closing factories and firing 3,400 workers from their jobs. Next time you buy a Heinz product, think of the hundreds of millions made by the boss and the thousands of workers who lost their jobs. May be we could not change corporate behavior through legislation, but for sure, we can change it when we vote our dollars at the market place.

– The new CEO of GM asked for federal protections from lawsuits arising out of its negligence in hiding and covering up the problem of the “ignition” that killed 13 people. A fix that could have costs about a dollar each, forcing the company to recall 2.6 million cars and hundreds of millions in recall costs and exposure to law suites. No wonder why the American auto industry has lost its credibility over the years.

– Huffington Post reported on 04/17/2014 that Sallie Mae cheated active duty soldiers on their Federal Student Loans, with federal investigators confirming that Sallie Mae actually cheated these GIs in violations of the Servicemembers Civil Relief Act intended to waive some of the bureaucratic and financial burdens. Of course we need to keep in mind that Sallie Mae has very lucrative contracts worth billions with the Department of Education and is almost a monopoly.

– Bloomberg reported on 12/17/2013 that because of certain “loophole” in the Federal Estate Tax (no doubt written by estate tax lawyers and accountants) a loophole the Congress” unintentionally” created and which the IRS “unsuccessfully” challenged it allowed billionaires the likes of Sheldon Adelson to use this “loophole” to avoid the payments of $2.8 billions in estate taxes, when he “shuffled stocks and trusts” shifting $ 7.9 billions to his heirs.

– The Centers for Medicare and Medicaid Services in a report released 04/09/2014 covering the government expenditures on Medicaid and Medicare and“ covering more than 880,000 providers and $77 billion in payments, revealed that Medicare paid almost 4,000 doctors and medical professionals more than $1 million apiece in 2012, the most recently available year. Of those doctors and medical professionals, seven received more than $10 million. Even those doctors who were reimbursed just $1 million collected 13 times the $77,000 average paid by the program, which is the country’s largest medical insurer. The government’s figures do not include what doctors billed private insurance firms”. With crooks like these, no wonder we have the most expensive medical services in the world

– While tens of millions of people are out of jobs and homes, and funding corporations to relocate overseas, thanks to Wall Street, it find enough money to pay $26.7 billions in executive bonuses for the tax year 2013.

Next time we go to the polls and vote for our next Congress, let us keep these issues in mind. Time for us the voters, the people to rewrite the rules and put these crooks out of business.

To all of our friends and readers… Happy Easter…