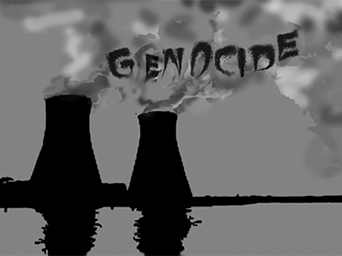 “A hell of a way to boil water.” Albert Einstein

Those who support nuclear power plants work for Satan, whether they know it or not.

Everyone of the 104 American nuclear power plants, and the 435 such plants around the world, all leak serious levels of radiation and have been doing so since the first one was built.

The radiation leakage from these nuclear power plants, and its tons of radioactive waste does not just disappear; it bioaccumulates, along with depleting uranium munitions and atomic testing, until most of the people you know have terminal cancer.

Moreover, every nuclear power plant in the world runs the serious risk of becoming a major disaster, perhaps worse than Three Mile Island or Chernobyl. It would take another mega-disaster to equal what has happened in Fukushima.

You see, for some unknown reason  many of the world’s nuclear plants were built close to major fault lines, which are subject to earthquakes. An accident? Mere stupidity? I think not.

Meanwhile, the major media still demonizes coal-powered plants to produce electricity, without a word of how they can be made clean with scrubbers or with clean coal.

And in spite of the Fukushima tragedy being a 24/7 catastrophe that could last thousands of years, dark forces are building 176 more nuclear plants of death.

Scientific American tell us that in the US alone, nuclear power plants have produced roughly 64,000 metric tons of radioactive waste with no safe place to keep it.

The insanity of building more even nuclear power plants when we have no safe storage solution for spent fuel rods is difficult to fathom.

Still, the nuclear power industry has the support of people who must have no idea of the cost to them, in terms of money, health, and life.