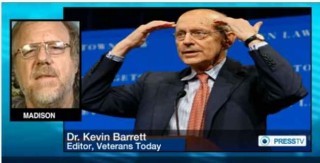 The holding of prisoners in the US-run Guantanamo prison in Cuba is “unconstitutional, a journalist and author says, noting that the detention center was created after the “false flag operation of 9/11.”

“It’s pretty obvious that the prison in Guantanamo is specifically set-up to be outside of US law and the US Constitution, so it’s almost unconstitutional on it face,” Kevin Barrett, founding member of the Muslim-Jewish-Christian Alliance, told Press TV.

The reason the notorious prison was created was because the “US was launching an illegal, undeclared war of aggression… . In fact, we now know it was a false flag operation, that there was no such foreign attack,” Barrett stated.

The “phony war on terror” was a “completely illegal war of aggression,” which Washington has used as an excuse to attack Muslims, he said.

A US Supreme Court judge raised questions Monday about the government’s authority to detain “terrorism suspects” in the Guantanamo prison. Progressive Justice Stephen Breyer issued a statement, in which he outlined several areas that the court has yet to address concerning the government’s detention authority.

The 2001 Authorization for Use of Military Force allows the US president to detain so-called enemy combatants.

More than 150 men are being held in the detention center in Cuba. Most of the detainees have not been charged or tried yet.

In January, Amnesty International condemned the US for its continued operation of Guantanamo. It said the torture of detainees at the prison is a prime example of America’s double standard on human rights.