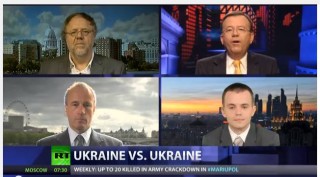 More than two months ago, I started my list of Top Ten Reasons Why the US Should Keep Intervening in Ukraine with:

10. We lost Crimea, so why not lose the whole country?

Apparently Victoria Nuland & friends read VT and lack a sense of irony. They took my joke as a serious policy prescription.

The “right sector” neo-Nazi massacres, the crowds chased into buildings and burned alive, the IMF austerity starvation regime, the Operation Gladio provocations, the threats to incinerate all Russian speakers with nuclear weapons…all of this is blowing up Ukraine, turning it into a failed state, and convincing the majority in the East that the only hope is to separate quickly and cleanly from the monster in Kiev.

Are the neocons blowing up Ukraine in service to Israel, as Stephen Sniegoski argues? Or are they just stupid? However imbecilic they may be, they must think we are even bigger idiots.

If Sniegoski is right, they’re not only insulting our intelligence, but also playing Obama for a fool.

But fewer and fewer people are getting fooled. Maybe even Obama will wake up one of these days and demand Nuland’s head on a platter.

Yesterday I appeared on Russia Today’s Cross Talk program with host Peter Lavelle and fellow guests Charles Shoebridge and Andrew Korybko. This is sort of like American Sunday talk show TV, with one big difference: The talking heads actually tell the truth.