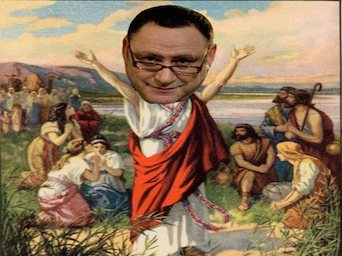 Introduction by Gilad Atzmon: I learned this week that Professor Marc H. Ellis – regarded by many as the contemporary leading Jewish theologian, came to the conclusion that yours truly, is the new Jewish prophet.

Here are some quotes I found in the final chapter of “Future of the Prophetic,” Ellis’ new epic treatise.

“Like the ancient prophets Atzmon exposes Jews. At the same time, Atzmon believes that the Bible, from which the prophets spring, is bogus….Atzmon provides no hiding place for Jews anywhere.”  (Future of the Prophetic, Marc H. Ellis pg’ 332)

“Atzmon is extreme but, in his extremity, he is much like the biblical prophets.” (pg’332)

“Atzmon performs the prophetic for our time. Like the biblical prophets he does not acknowledge, Atzmon believes we are at the end of Jewish history, a history, like the prophets, he no longer believe exists or, if it does, is not worthy of being carried forward. Irony of ironies, he witnesses to the continuity of both” (pg’ 334)

“Like Moses, though with a twist, Atzmon is constrained from entering the land….Atzmon refuses to return until the Promised Land is liberated from the modern-day Israelites. In short, Atzmon’s homeland is occupied by Jews” (pg’ 336)

“ Instead of King of the Jews. Perhaps Atzmon should be recognized as the prophet of old, At least in his self description and his outreach, this is the way he appears” (pg’ 332)

“Although largely silent on the prophets, Atzmon’s prophetic voice wants nothing to do with his biblical patrimony. It seems to him contrivance that leads to what Israel has become-and perhaps, more or less, always was. (pg’ 329)

“From the Jewish establishment Board of Deputies to the marginal Jewish Trotskyites –‘the Jews for this and that’- Atzmon sees it all as a giant scam.”  (331)

For Atzmon Jewish identity lacks foundation. Therefore, ganging up on him becomes an agreed-upon foundation to deal with a group anxiety that there is a little basis of Jewish identity at all.  Why else would such diverse group come together to denounce a fellow Jew* with such vehemence? Perhaps, as well, Jewish group-think regarding Atzmon represent an anxiety that Atzmon himself voices and embodies: that the only foundation of Jewishness is injustice. “ (331)

“He (Atzmon) baits his opponents and leaves them without a place to turn. Nor does he leave himself room to turn. Unlike the biblical prophets, Atzmon’s call to repentance leads nowhere – unless exile is always somewhere else” (pg’ 334) 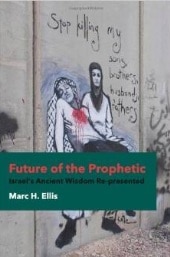 Addressing the question why Atzmon doesn’t simply drift away and leaves the Jews alone Ellis writes:

“In fact, Atzmon takes pleasure in the ire of Jews he antagonizes with his writing. He delights in calling attention to the restrictive Jewishness of Jews across the board. “(Pg, 330)

On the Jewish appeasement of Palestinians a la Ali Abunimah & Co, Ellis writes:

“Atzmon’s self-identification has led Jewish and Palestinian groups to publically disassociate from him. The lead has been taken by Palestinians themselves who struggle to separate Jews and Zionism. For these Palestinians, Atzmon muddies the waters since their dispute with Israel as a Jewish State is not with Jews themselves. By disassociating themselves from Atzmon, Palestinians want to set the record straight about their own views on Israel, Zionism and Jews” (pg’ 330)

Final words by Gilad Atzmon: I have never regarded myself as a prophet, let alone a Hebrew prophet. I am just a person who thinks loudly, often enough, too loudly.

I can see where Ellis is coming from and why he sees a prophet in me. Yet, I need to emphasise, that for many years I haven’t spoken ‘to Jews.’ Instead I talk about Jews I as I see them, or more precisely, about Jewishness, Jewish culture and ID politics.

Ellis, no doubt a unique spiritual and critical Jew, is correct to see in me something that is foreign to his vision of Diaspora Jews.  I was raised in Israel, I was brought up to see myself as the body and the soul of the revival of the biblical Israelite. In alignment with my peers, we believed ourselves to be the remote sons and daughters of King David.  This view was further strengthened by the Israel in which I was raised; a Spartan society driven by Prussian military culture. We were taught to believe in ‘truthfulness’, ‘authenticity’ and ‘justice.’ We were patriotic because we blindly adhered to the Zionist ‘homecoming’ ethos.

I also believe that it was the Israeli rather than the Jew in Shlomo Sand, Gideon Levy, Israel Shamir and Israel Shahak that made us into outspoken critics of Israel, the Jewish people, Judaism and Jewish ID.

Unlike the Diaspora Jewish left, a controlled opposition front dedicated to the concealment of the Jewishness of the Jewish State, Israel has managed to produce the most profound critics of Jewish related matters.

It follows that it is actually the ‘Negation of the Galut (Diaspora)’ embedded in Israeli patriotic ideology that fixed the Israeli intellect in a bitter battle against the ‘Jew.’ It is that unique resilient attitude which Ellis interprets as Hebraic prophetic spirit .

* It is crucial to reiterate that I am not a Jew for many years nor do I define myself as one.