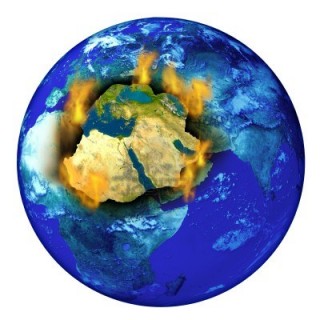 Motorists know that if a fire breaks out at a petrol station, you cannot put it out by spraying it with gasoline. But according to recent reports, it seems the American president isn’t that smart.

On Friday we learned that Obama is asking Congress for $500 million for the so-called Syrian rebels. Apparently he does not realize that the problem he says he wants to solve – ISIL terrorists overrunning Iraq and Syria – was created by the US and its allies’ funding of the Syrian insurgents. Throwing more money at the “Syrian rebels” would be throwing gasoline on the fire.

Obama, of course, doesn’t see it that way. He claims that he has finally learned to tell the difference between the “good rebels” and the “bad rebels.” According to the Associated Press, “administration officials say the U.S. has grown increasingly confident in recent months about its ability to distinguish the moderate rebels from the more extremist elements that include the al-Qaida-inspired Islamic State of Iraq and the Levant, or ISIL, which has stormed into Iraq and captured much of the northern part of the country.”

These administration officials are tacitly admitting that the US has been “inadvertently” arming ISIL – a vicious terrorist group that was expelled from al-Qaeda for being too extreme. They want us to believe it was a mistake.

If those administration officials are right, Obama should be impeached for incompetence. Allowing American dollars to build and grow ISIL, even by mistake, would be a blunder of colossal proportions.

But was it really a mistake? Many credible reports have emerged that the US has been intentionally funding ISIL. This week, investigative journalists found strong evidence that the CIA has trained and armed ISIL terrorists at a secret base in Jordan. While Press TV and other alternative media outlets are covering these revelations, the mainstream Western media has suppressed them.

So these US administration officials are lying when they tell us: “In the past we were inadvertently funding ISIL, but now we have figured out who they are, so we won’t give them any more American taxpayers’ money. We promise to hand the next $500 million to other groups.”

Such a claim is preposterous. In fact, the US has been behind the rise of ISIL all along. And if Congress is stupid and evil enough to approve Obama’s request for another $500 million, ISIL will get the lion’s share of that, too.

In reality, there are no viable “moderate Syrian opposition” militias. Yes, there are some mostly-imaginary groups created by US taxpayer dollars and run mainly by exiles who have not set foot in Syria for years, decades, or even generations. Such nonexistent “moderate Syrian rebels” are just a scam for defrauding the US treasury and hiding the reality of who is really getting those US taxpayer dollars. The “moderate US puppet rebels” have virtually no support in the region and no meaningful military presence. The destabilization of Syria and Iraq has been almost entirely accomplished by extremist Takfiri terrorist groups. The two biggest are ISIL (the ultra-extremist terrorists) and the al-Qaeda affiliated al-Nusra front (the merely extremist terrorists). These are the people who will get most of the $500 million Obama wants to send to Syria and Iraq.

Iraqi Prime Minister Nouri al-Maliki apparently understands that the US is playing a double game: Pretending to oppose ISIL, while covertly creating and supporting it. That is why al-Maliki has decided to buy used fighter jets from Russia to fight ISIL, rather than wait for the long-promised US jets that may never arrive. Al-Maliki recognizes that by refusing to deliver aircraft, the US had intentionally set the stage for ISIL’s invasion and occupation of northern Iraq: “We shouldn’t have just bought U.S. jets, we should have bought British, French and Russian jets to provide air support. If we had air support, none of this would have happened,” al-Maliki told the BBC.

US Army Colonel Steve Warren, a Pentagon spokesman, responded by claiming that the US was sending fighter aircraft purchased by Iraq “as quickly as possible” but they wouldn’t arrive till fall. Apparently the US is not in any particular hurry to help the Iraqi government prevent its dismemberment by ultra-extreme terrorists.

If we are to believe the American government, it seems to have armed ISIL far more efficiently “by accident” – and for free – than it is able to arm the Iraqi government intentionally even when the Iraqis are buying military equipment at market prices. Perhaps al-Maliki should ask the US to accidentally send him some free fighter jets.

What explains this bizarre, two-faced US policy? In a word: Destabilization. The real US policy goal is to hamstring, cripple, dismember and destroy Middle Eastern nations. The destabilization doctrine is set by the Zionist lobby, which dominates US Mideast policy. Israel’s desire, expressed decades ago by Oded Yinon, is to have the countries of the region split up into balkanized sub-units. So the Zionist-driven US creates and runs extremist groups like al-Qaeda and ISIL. These groups attack and destabilize Middle Eastern countries in an effort to split those countries apart. They also provide a pretext for US intervention in the region.

So the US government is using the hyped-up threat of the ISIL extremists to throw more money and weapons at – who else – the ISIL extremists. It is only pretending to try to put out the fire by spraying it with gasoline. In fact, it knows perfectly well that it is committing arson, while dressed up in the uniform of a firefighter.

If the American people ever figure out what their government is doing, it is Washington, DC, not the Middle East, that will burn to the ground.