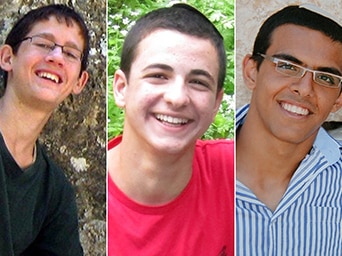 One thing for sure, Israelis, their supporters, major Western capitals even Ramallah, all agree that Israeli lives are more worthy than Palestinians lives, perhaps by a multiple of hundreds if not thousands and perhaps for G-d reasons.

Hundreds of thousands of Israeli, Jews and Christians around the world mourn the lost lives and murder of Eyal Yifrah 19, Gildad Shaer 16 and Naftali Fraenkel 16.

Yet not even Ramallah mourned the lost life of 17 years old Muhammed Abu Khudair the Palestinian youth kidnapped as he sat on the fence near his home in Shufat, and murdered by Israeli settlers and gangs.

Non of those mourning the lost lives of these young Israelis certainly not the lost life of the young Palestinian heeded the words of Yishai Fraenkel, the uncle of Naftali when he declared “ murder is murder whatever one’s nationality or age. There is no justification, no forgiveness, no atonement for any murder whatsoever”.

Of course the Israeli government promised to open an investigation, but it did not conduct raids on homes of suspected Jewish murderers and did not send its jets attacking settlements and settlers. Both Tel- Aviv and Ramallah satisfied with the promise of an “investigation”. As expected none of the Ramallah leadership attend Abu Khudair funeral.

You see, Israeli leaders and citizens, see an exception to G-d/Allah/God rules that “All Men/Women are created equal” and as such the Talmudic rules of “an eye for an eye, tooth for a tooth” no longer applies in modern day Israel.

This is what “innocent” settlers do all day protected by IDF

The event of the last couple of week, which saw the disappears and possible kidnapping of three ‘settlers/trespasser” Israeli who disappeared in an area under the total control of Israeli security forces, showed us that the lives of Israelis are more worthy than the lives of hundreds if not thousands of Palestinian Arabs.

The kidnapping and subsequent murder of the three Israeli teenagers is an inexcusable crime even though they are in fact “trespassers and land thieves”. However resisting the Israeli Occupation is not through murder and kidnapping, but massive civil unrest and uprising. Killing and murdering of Israelis in the West Bank will never lead to peace or end the Israeli Occupation.

Certainly Israel and some in Ramallah were hoping that Hamas was involved in the kidnapping to abort the “unity government”. Khalid Mishaal and all Hamas leadership denied any involvement in the kidnapping and subsequent murder. Yet, Hamas is always guilty even when proven innocent.

I was in Ramallah when Israeli troops raided over 1,500 homes, destroying everything in the homes, furniture, appliances, computers and ‘stealing’ and robbing families of cash and gold while at it. Kidnapped over 500 Palestinians in the West Bank and the Israeli Air force conducted over 50 aerial bombardment of Gaza.

IDF troops shot and killed a number of Palestinians in Jenin, in Ramallah and in Hebron and in Qalandia. Couple of weeks ago, Israeli troops shot and killed two Palestinian young men in cold blood in the town of Beitunia. Yet no one ever denounced this cold blood murder, not Abbas, not Netanyahu, not Obama, not Merkel certainly not Holland or Cameron. It is normal for Israeli troops to kill, kidnap, and destroy at well. I guess every one got used to it and expect it.

Israelis, members of the IDF and friends of the IDF in America and the world celebrated the kidnapping and murder of Abu Khudair on social websites and many called for the exterminations of all Palestinians and yet, such calls of revenge and celebration of cold blooded murder find wide acceptance in social media without these social sites such as Facebook taking any actions. I only wonder if Facebook among others will tolerate “Arabs” celebrating the death and murder of an Israeli.

Who knows, perhaps in the next millinnium, the equation will change, when the life of an Arab will be equal to that of an Israeli and when G-d and Talmudic rules of “ an eye for an eye and a tooth for a tooth” will apply.

Meanwhile and in closing I say to Sami Abu-Zuhri Hamas spokesman to “shut the f—k up” and stop making such stupid, reckless statements such as the one he frequently use “ Hamas will open the gates of hell in Israel”. Let Hamas use and divert its investments in these useless rockets in improving the quality of drinking water in Gaza. It is time for Hamas to clean up its acts.