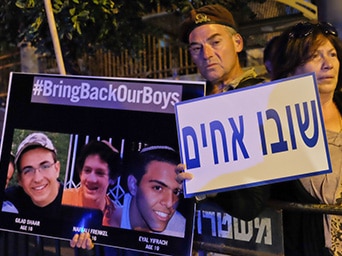 The BBC, that paragon of broadcasting, repeatedly fails to give the necessary context when reporting events in occupied Palestine. The rest of the mainstream media are equally guilty but we still tend to look to the BBC as the standard setter, a lofty position from which it has slid a long way recently.

In its many reports about the three teenage Israeli squatters allegedly kidnapped and murdered by Hamas, I have never heard the BBC explain that the Fourth Geneva Convention, article 49, forbids an occupying power to transfer parts of its own civilian population into the territory it occupies and that doing so constitutes a war crime.

So when it comes to pinning the blame for the triple killing the finger must surely point to Israel’s prime minister Netanyahu and his delinquent government. By wilfully expanding their illegal settlement policy even when so-called peace talks were going on, and knowing full well that reprisals might follow, they deliberately put these youngsters in harm’s way.

We know that at least one of them lived in a settlement built on stolen land. Information on the others is hazy but WAFA, the Palestinian news agency, refers to all three as settlers. If that’s the case, they were trespassers in the West Bank. And like all squatter-settlers their very presence on Palestinian territory, let alone their arrogant behaviour, would have been provocative in the extreme and an affront to the rightful Palestinian residents. The risks to the boys’ safety were painfully obvious.

Many suspect, with good reason, that the abduction and murder was a false flag operation, in which case the finger of suspicion stays pointed at Netanyahu. Of course, Netanyahu is determined to pin the blame on Hamas one way or another. There are many in the British parliament too who are eager to give Hamas a good kicking and seem to have made up their minds already. For example,

Robert Halfon (Harlow) (Con): “The world has seen the tragic and brutal murders of three Israeli youngsters, most probably by Hamas. Will my right hon. Friend give the Israeli Government every possible support at this time? Does he agree that, far from showing restraint, Israel must do everything possible to take out Hamas terrorist networks, and will he give the Israeli Government support in that?”

The Prime Minister (David Cameron): “What I say to my hon. Friend, who I know is passionate about these issues, and to everyone in the House, is that this was an absolutely appalling and inexcusable act of terror, and one can only imagine the effect on the families and friends of those poor teenagers, and what happened to them. It is very important that Britain will stand with Israel as it seeks to bring to justice those who are responsible. We also welcome the fact that President Abbas has firmly condemned the abduction and tried to help find those people. As my hon. Friend said, it is important that all security operations are conducted with care so that further escalation is avoided. The people responsible for this should be found and brought to justice.”

But Israel still hasn’t produced evidence that Hamas was responsible, as when Netanyahu’s spin doctor was challenged repeatedly by a lone BBC reporter in this video clip
http://www.bbc.co.uk/news/world-middle-east-28097164 .

The British government, questioned in the House of Commons, says it has seen and heard no evidence that Hamas was involved. http://www.publications.parliament.uk/pa/cm201415/cmhansrd/cm140702/debtext/140702-0001.htm#14070259000006 On 1 July Hugh Robertson, Minister of State, Foreign and Commonwealth Office told MPs: “As for who is responsible, it is too early to say. The British Government have no firm evidence, and nothing from the Islamic state in Jerusalem… The Israeli Government are very clear about the fact that Hamas was responsible. When I was in Israel 10 days ago, there was some indication on the Palestinian side that that might be correct, but we have no hard evidence in London to back that up.”

Richard Burden (Birmingham, Northfield) (Lab) asked: “Will he [Robertson] say to the House, in the appalling situation we are in at the moment, what he thinks are the responsibilities under international law of the Palestinian Authority and what are the responsibilities of the Israeli Government as an occupying power in the West Bank, and will he confirm that collective punishment of the Palestinian people is a crime under international law?” But Robertson simply sidestepped the point about Israel’s responsibilities and the collective punishment inflicted on the Palestinians. It wouldn’t do to upset those nice racist friends of Mr Cameron in Tel Aviv.

Squatter-settlers are often armed, behave abominably and are protected by the Israeli military. Many are religious nutters. What would the citizens of Witney in Oxfordshire or Kansas City USA make of gun-toting, foreign intruders swaggering down their high street causing mayhem, burning olive groves, driving residents from their homes, harassing shoppers, terrifying children on their way to school and even driving their cars at them?

The death of any youngster is a tragedy. And it is obscene to claim, as some do, that one young person is more precious than another. So here’s another piece of context you won’t hear from the BBC or any other mainstream medium. Since the second intifada (September 2000) 1,656 Palestinian women and children have been killed in the occupied territories by Israeli security forces and civilians. In the same period just 256 Israeli women and children were killed in Israel by Palestinians. The arithmetic puts the tragedy of the three Israeli teenagers in a more sobering light. The figures are supplied by B’Tselem, an Israeli information and human rights organisation.

As of yesterday, at least 640 Palestinians had been arrested since the start of the Israeli military crackdown following the alleged disappearance of the three teen settlers, who were later found killed. These included 59 released prisoners in the exchange deal of 2011, including 11 pre-Oslo prisoners bringing up the number of pre-Oslo prisoners in Israeli jails to 41, said the Ministry of Foreign Affairs in a statement.

11 Members of Parliament had also been arrested, bringing up the number of imprisoned parliamentarians to 22. The number of Palestinian prisoners in Israeli jails now stands at over 5,800.

Yesterday, in a Commons debate ‘Protecting Children in Conflict’ http://www.publications.parliament.uk/pa/cm201415/cmhansrd/cm140703/debtext/140703-0002.htm#14070342000001 , Grahame Morris (Easington) (Lab) said: “There is a danger that the current climate of vengeance and retribution will worsen the situation. Uri Ariel, the Israeli housing Minister, has called for a “proper Zionist response”, meaning an acceleration of Israel’s illegal expansion of settlements in the west bank and East Jerusalem and a programme of punitive house demolitions. The Israeli Deputy Minister of Defence, Danny Danon, said that Israel should make the entire Palestinian leadership pay a heavy price for the killing of the three Israeli teenagers, and Mr Lieberman, the Israeli Foreign Minister, advocated a full-scale invasion of Gaza as a legitimate response. In the name of security, rights, justice and peace, the demands of these politicians must be rebutted, resisted and challenged by the international community.”

He might have added, the international media. But the BBC and the rest still treat those animals with utmost reverence.